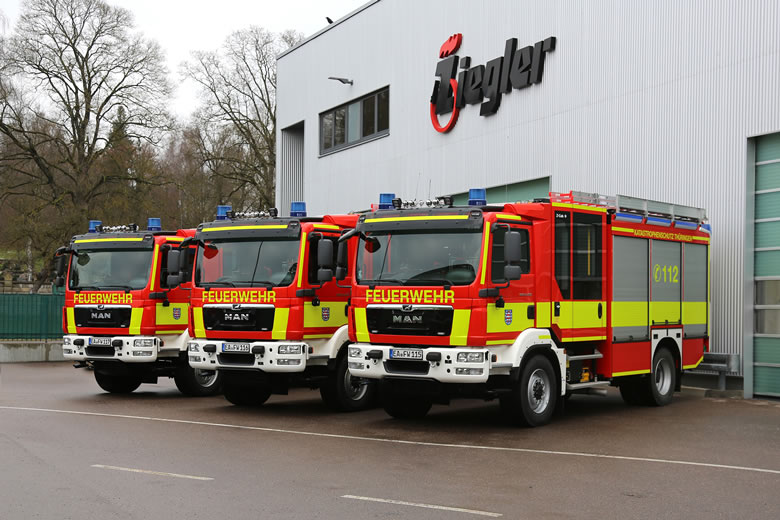 Albert Ziegler GmbH, headquartered in Giengen/Brenz, Germany, has again been awarded with the order of up to 32 additional LF 20 KatS for the state of Thuringiawithin the framework of a Europe-wide contract award procedure. This is thus the third series in a row that the state of Thuringia is procuring from ZIEGLER. Since 2016, ZIEGLER has already built 27 LF 20 KatS for various civil protection units in Thuringia.

Overview of orders placed so far by the State of Thuringia to ZIEGLER:

The superstructure and the operating system are each designed in the latest generations of ALPAS and Z-Control. The ZIEGLER portable pump is stored in a space-saving manner in the lower compartment, which enables a favourable centre of gravity as well as quick and ergonomical removal.

At the same time, ZIEGLER is already manufacturing 7 TLF for forest firefighting on Unimog chassis for Thuringia. This means that ZIEGLER will continue to be strongly represented with its products in the state of Thuringia in the future. Area sales manager Thomas Grözinger says: “After the last major project about 23 equipment vehicles, which ZIEGLER delivered 2 years ago, the ZIEGLER team is now looking forward to the delivery of up to 32 new LF 20 KatS for the disaster control units in Thuringia.”

In addition, in a separate award, the contract for the equipment of all up to 32 LF 20 KatS for the state of Thuringia was placed with ZIEGLER. This means that everything from the chassis to the equipment comes from a single source.

Ziegler Brandweertechniek B.V. received an order for the delivery of a total of 75 firefighting vehicles to the Safety region Noord-en Oost-Gelderland (VNOG). The framework agreement covers the three vehicle types TS-Basis 4×2,TS-Basis 4×4 and TS Combi 4×4, each of which fulfills specific operational purposes. The delivery will take place in the course of the years 2023 to 2026.

About VNOG
In the safety region Noord-en Oost-Gelderland, there are 56 fire stations in a total of 22 municipalities. They are responsible for day-to-day operations, while the fire department at regional level is responsible for emergency planning and disaster prevention, among other things. This happensin cooperation with GHOR (central station of local medical care), the police and the municipalities. The region is home to more than 870,000 people living in an area of 3,000 km2.