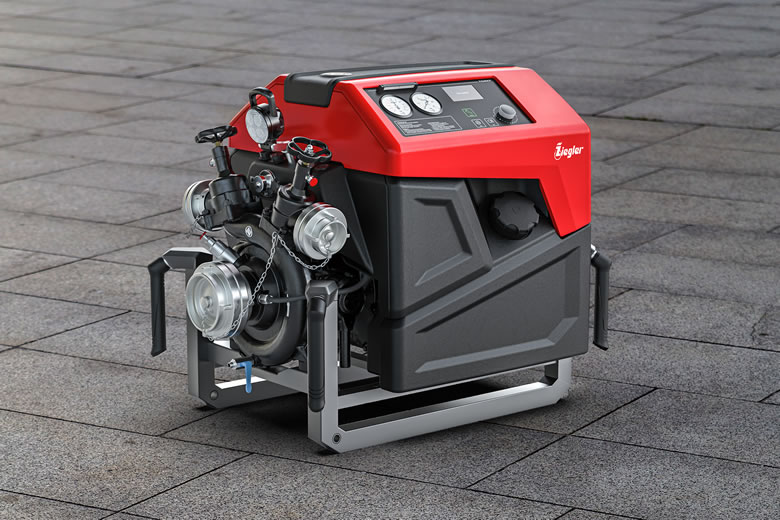 It is THE highlight at the FLORIAN 2022 in Dresden. After ZIEGLER has already presented its innovative strength with the new digital products Z-Connect and Z-Remote as well as with the presentation of the first Z6 with HybridDrive Technology in 2022, another highlight follows directly: At the trade fair FLORIAN in Dresden, ZIEGLER presents the latest generation of the Ultra Power to its customers, the press, other media representatives and all trade fair visitors.

From 1924 to 2022: the emergence of the most powerful portable pump on the market

With the production of the first portable fire pump in 1924, ZIEGLER already made its first statement in the industry. Then, the first Ultra Power in 1997 already convinced with an unprecedented extinguishing power and a performance of more than 1,500 l/min at 10 bar pressure. To date, ZIEGLER has delivered more than 11,000 Ultra Power to customers all over the world.

One of ZIEGLER’s promises is the consistent further development and improvement of its products. This requires that even successful products and systems are constantly scrutinized and continuously being improved. In this respect, ZIEGLER has also not stopped at the proven Ultra Power. The company has developed it further and adapted it to the constantly changing environmental properties, disaster situations and needs of fire departments.

In 2022 –exactly 25 years after the presentation of the first Ultra Power in 1997 –ZIEGLER now presents the new Ultra Power already in its fifth generation. This time, the PFPN has been redesigned and constructed from the scratch.

“The best made even better“

“The best made even better”– these were the first customer reactions to a prototype of the new Ultra Power. The focus of the redesign was on significantly reducing weight while increasing the performance. As a result, the Ultra Power as a PFPN 10-2000 with a performance of over 2,000 l/min at an outlet pressure of 10 bar is currently the world’s most powerful portable fire pump in accordance with EN 14466.

The patented status lighting and the latest generation of Z-Control provide even better support and relief for the user during the operation.

The new Ultra Power also impresses with compact external dimensions of approx. L × W × H: 1,010 × 710 × 845 mm and with an operational weight of less than 170kg which complies with a reduction of just under 20 kg. The carrying frame consists of an extremely sturdy light-alloy frame with four newly designed rotating handles with rubberized cold-hand protection.

ZIEGLER made no compromises when selecting the engine. The selection process took almost three years – quite a few engines failed to pass the company’s high standards along the way.

The new TGB 2-cylinder engine runs smoothly and delivers up to 83 HP as the basis for all 3 power levels 10-1000, 10-1500 and 10-2000. In addition to its durability, the engine is above all characterized by simple technology and extremely low weight with high performance.

This 4-stroke engine is used thousands of times worldwide in ATV from TGB in addition to the Ultra Power. The range of use extends from the hottest deserts to the Arctic Circle, where the engine always performs excellently.

TGB not only manufactures its own engines and vehicles, but also supplies engines and components to many well-known companies in the industry. Due to its worldwide distribution, the TGB engine can rely on a nationwide dealer network of TGB representatives.

In addition, the supply of spare parts and maintenance of the engine is included in ZIEGLER’s service portfolio, thus offering the customer even more convenience with only one contact for all components and services.

Equipped with the latest technology

In addition, the patented status light shows the operator the current status of the portable pump at a glance. This means that it can even be detected remotely whether, for example, the fuel reserve has been reached.

At one glance: The five most important facts about the new Ultra Power