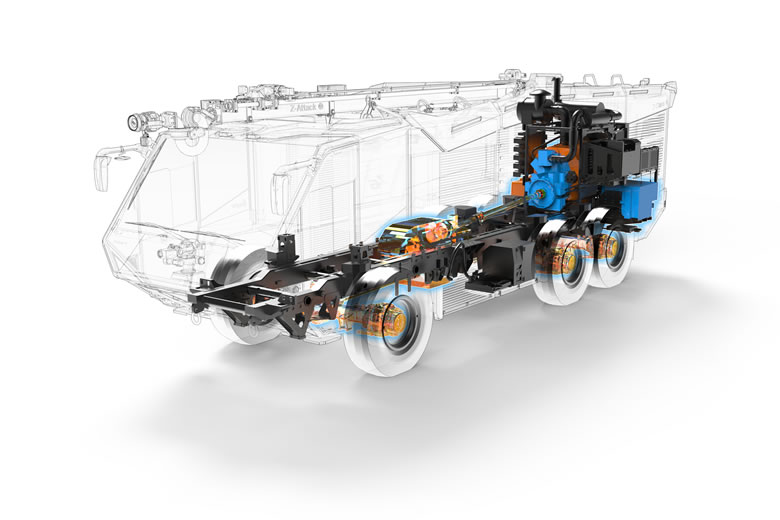 Climate protection and environmental awareness are fundamental values of today’s industry. Many companies already incorporate these into their work and production on a daily basis. At ZIEGLER, too, sustainability is an elementary component of the company strategy. ZIEGLER has also made its business to ensure that there are no performance losses when new technologies in the spirit of environmental awareness are being developed. With the presentation of the first Z6 with hybrid drive technology, ZIEGLER is once again setting a milestone in the revolution of aircraft firefighting and rescue vehicles.

ZIEGLER has more than 50 years of experience in the production of aircraft firefightingand rescue vehicles and has since now delivered more than 300 Z-Class of different types to national and international airports. Most recently, ZIEGLER introduced the new Z-Class in 2020 as part of the Innovation Rollout, thus raising the bar: this concept alone surpassed anything the industry had known before and set new standards in terms of acceleration values and the drive concept.

The first customers also reacted enthusiastically to the new Z-Class. Since the unveiling of the first prototype, more than 20 new vehicles have already entered service and further orders have been received. These include well-known national and international customers such as Münster-Osnabrück Airport (FMO), Hamburg Airport and Anambra International Cargo Airport in Nigeria.

Alternative drives have played an important role in the automotive industry for a very long time. The first vehicles with purely electric or hybrid drives have already been successfully on the market for several years.

The requirements for fire departments and airports worldwide are also changing along the same lines. In addition to the measures being taken in energy supply, building technology or airport-specific equipment, this also includes the strategic decarbonization and emission reduction of vehicle drives. The keyword “Green Airport” is also frequently mentioned in this context. This has prompted those responsible to look for environmentally conscious drive alternatives, reduce emissions, minimize fuel consumption and also use vehicles that generate less noise. Of course, companies like ZIEGLER are taking up this challenge and develop customized concepts to offer airports what they need for future-proof fleet planning.

The fact that ZIEGLER has an answer to alternative drives and is capable of producing them has already been proven by the company for 10 years, for example with the presentation of the electrically driven MERKUR tunnel rescue vehicle in 2012.

However, it is also important for ZIEGLER to think one step further and to find a future-proof overall concept for alternative drives in fire departments. The aim was not just to produce a vehicle with e.g. an electric drive, but to develop a concept that not only meets the requirements of airport fire departments worldwide,buteven exceeds them. In order to follow the holistic approach, it is also necessary to ensure that the infrastructures are in place, that life cycle costs are kept low and that a viable service and maintenance concept is in place.

In cooperation with renowned partners such as SCANIA and Titan as well as with national and international airports, ZIEGLER thus developed the new Z6 Hybrid: The first ZIEGLER aircraft firefighting and rescue vehicle with an alternative drive concept. The focus was consistently placed on the use of tried and tested series components in order to be able to guarantee reliable operation even in the initial test phases.

This means that the Z6 Hybrid is usually powered purely electrically at airports. Depending on the driving profile, a corresponding range even allows over 80% of the journeys to be made electrically.

When it comes to an operation where every single second counts, the Z6 Hybrid really comes into its own. The electric motor and combustion engine accelerate the 39 ton vehicle, to its top speed without competition. Here, the values are on a par with an 8×8 chassis with diesel drive. If the battery should ever be empty and has to be charged, the full drive power of the diesel engine of a conventional Z6 is available as usual. In contrast to the market, ZIEGLER does not follow the downsizing trend here and thus ensures full and long-lasting reliability for the operation. Should the power of the electric motor not be available, all normative requirements are still met.

Thus, ZIEGLER has solved the challenge of developing the world’s best alternative drive concept for aircraft firefighting and rescue vehicles. It combines aspects of sustainability, is faster than any comparable product and ensures the usual reliable operation. Thanks to its modularity, the hybrid concept can also be extended to other types of the Z-Class.

In order to further put the Z6 Hybrid through its paces in addition to the usual intensive testing by ZIEGLER, a prototype of the vehicle will be in use at Frankfurt Airport FRAPORT from 2023. Among other things, this will involve testing the operational suitability of the electric drive train and the recording of a wide range of measurement data to optimize the operating concept.

Delivery of the first new Z8 for German...

Power & Control with the LUKAS Dashboard