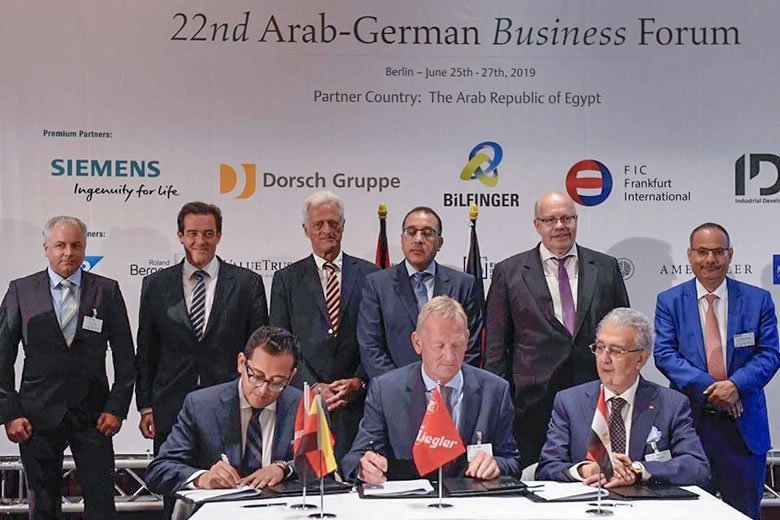 The ZIEGLER Group, headquartered in Giengen an der Brenz, Germany, is establishing a joint venture with Bavaria Holding in Egypt, a manufacturer for fire extinguishers of all types and sizes. The two companies have been working together successfully since 2015. Bavaria and ZIEGLER have decided to establish a joint venture in order to intensify the cooperation and establish a closer relationship with the customers in Egypt. The target of the joint venture is to facilitate the access to ZIEGLER vehicles for the market in the Middle East. Among other things, ZIEGLER will therefore supply Bavaria with components manufactured within the ZIEGLER Group. The components will then be assembled in a newly built production hall in Egypt, allowing customers to purchase locally produced vehicles that meet ZIEGLER’s high quality standards.

Bavaria was founded more than 100 years ago as “Bavaria Feuerlöscher Apparatebau” in Germany. The company has grown strongly over the years and is today one of the largest manufacturers of car fire extinguishers in Africa, the Middle East and Europe. Bavaria Holding offers its customers a wide product portfolio of pumps, mobile fire extinguishers, CO2 fire extinguishing systems, alarm systems and much more in addition to car fire extinguishers – the entire range of firefighting equipment. With a total of 950 employees, subsidiaries in Lebanon and Sudan and further locations in Europe and many other countries, Bavaria is also very well positioned in the international market.

ZIEGLER is one of the leading international suppliers of fire fighting vehicles and accessories. The product range encompasses the entire spectrum of firefighting technology from emergency clothing, highly specialized pump and extinguishing systems to fire-fighting vehicles of all kinds. Of over 1.300 employees worldwide, around 680 work at the company’s headquarters in Giengen ander Brenz, Germany. Further production sites are located in Rendsburg and Mühlau in Germany, the Netherlands, Croatia and Indonesia. Additional sales and service offices are located in the Czech Republic, Italy, Slovenia and China.

ZIEGLER serves four strategic customer segments: “Municipal”, “Industry”, “Airport” and “Government”. Each segment has its own special requirements, to which ZIEGLER’s products and services are designed. The vehicles provided for municipal fire departments guarantee security in metropolitan areas, cities and communities and, other than vehicles for large industrial plants, correspond exactly to the respective standard. Vehicles used in industrial plants usually have very specific application profiles and are not subject to any particular standard. For airport firefighting vehicles, ZIEGLER vehicles guarantee safety on the ground. Vehicle configurations specifically designed for the requirements of official authorities and ministries require a great deal of technical know-how. For this purpose ZIEGLER builds vehicles for civil or disaster protection, for military or law enforcement purposes or for domestic or foreign operations.

“With Bavaria, we have a strong and competent partner on our side who has always supported us well in the distribution and sale of our products in the Middle East. The establishment of the joint venture now offers further interesting opportunities. We are already looking forward to our future cooperation”, says René Pol, CSO ZIEGLER Group.

The cooperation between the two companies was announced on June 26th, 2019 at the 22nd Arab – German Business Forum in Berlin. Germany and the Arab world have had very good business and economic relations for a long time. German companies offer many opportunities for cooperation and are able to offer not only high-quality goods, but also state of the art know-how.

Despite challenges, the Arab world remains a market with great potential for business development. Economic development in the region is gaining more and more momentum. Ideal opportunities for sustainable business and cooperation are expected for both German and Arab companies. With over 600 participants, the forum is the most important German – Arab economic event and offers high-ranking decision-makers the opportunity to talk about economic cooperation, to find trading partners or to present innovative solutions. This year’s partner country is the Arab Republic of Egypt. The guest of honor is the Prime Minister H.E. Dr. Mostafa Madbouly, who will be accompanied by a high-ranking Egyptian delegation from politics and business. The Forum will take place from 25th – 27th June 2019 at the Ritz Carlton Hotel in Berlin. Panel discussions, speeches and networking opportunities will give decision-makers the opportunity to discuss the latest developments.