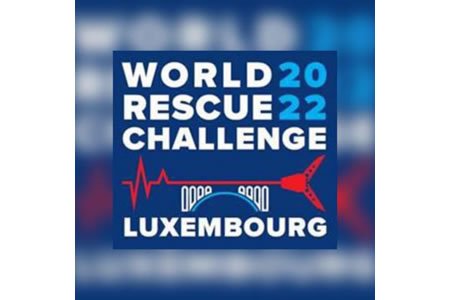 In a year from now, we are pleased to welcome the rescue community in Lanzarote! A dedicated team is working very hard to offer you an unforgettable experience with exciting challenges and interesting learning experiences! We will also propose you first class social events and make you discover our beautiful city and country!

The World Rescue Organisation (WRO) was created with the aim of bringing together rescue personnel from around the world to share and improve rescue services.

At the annual event, rescue teams from around the world compete in scenarios designed to be challenging. Every participating team will complete three challenges and awards will be given to the top three teams in each category.

Every year the event is hosted in a different country and Lanzarote will be the host in 2023.

At event opening in Luxemberg, the president of Lanzarote’s Security and Emergencies Consortium, Marcos Bergaz, took to the stage to take the baton and give a speech.

During his speech, Bergaz stated that “Lanzarote has all the ingredients to host the next World Rescue Challenge.”.

He later encouraged the attendees “to discover the unique island of Lanzarote. I invite you to discover it, as more than two million tourists do every year, who usually repeat and recommend to friends, neighbours, and family to do the same.”.

“As the Nobel Prize winner José Saramago said: Lanzarote is not my land, but it is my land. I tell you that if you visit us, it will also be your land”, he added.

The Word Rescue Challenge 2023 sees world class rescue and trauma teams compete annually in an event designed to challenge emergency service personnel by developing and enhancing their existing skills and to help raise awareness of the global problem of road death and injury.

Over fifty international teams participate in the challenge each year, which covers two challenge disciplines, Extrication and Trauma.

Within the Extrication challenge discipline teams are assessed against Incident Command, Medical and Technical Rescue by a team of dedicated international assessors. Each extrication team consists of six members which include the team leader, two medics, two technical rescue personnel and one person responsible for operational support.

Within the trauma challenge, discipline teams are assessed against Casualty Care Management and Progression by a team of dedicated international medical assessors. Each trauma team consists of two members.

All teams compete in the following evolution’s:

To date there have been 22 World Rescue Challenge`s which have been held in: