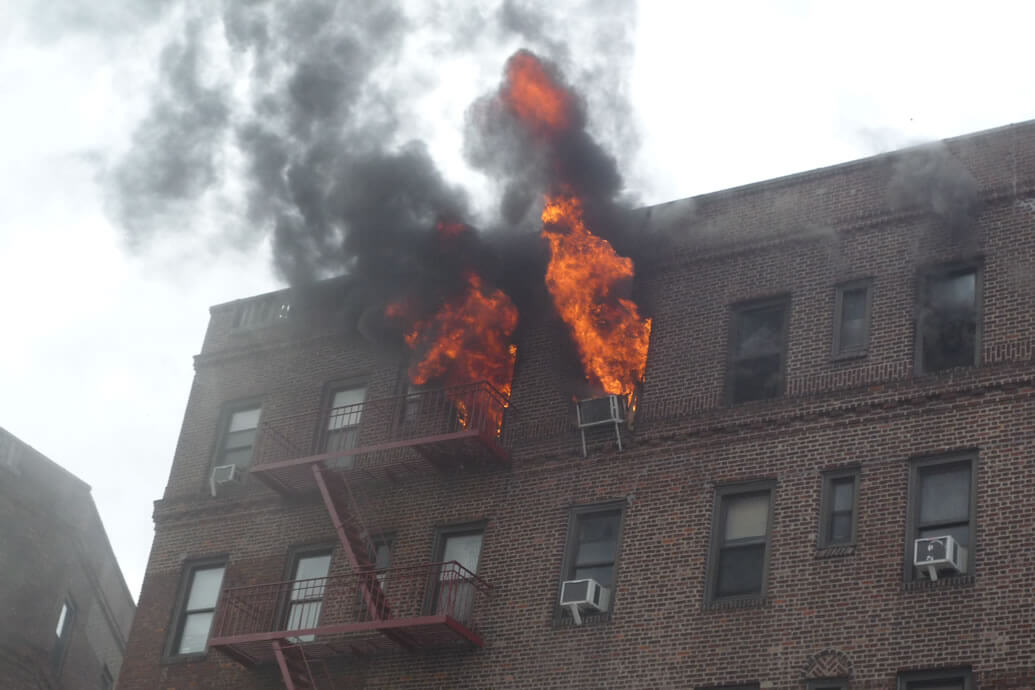 Wind Driven Building Fires. The hazard to firefighters and firefighting equipment from wind driven building fires is immense. It is not a new problem but is an issue that has been associated with several firefighter fatalities and near misses. Paul Grimwood first drew attention to the dangers associated with wind-driven forced draft fires in his 1992 book FOG ATTACK following several bad experiences in London.

In 1992 I included a chapter in my book Fog Attack on the dangers of ‘blow-torching’ effects caused by wind driven building fires and discussed ways of reducing the hazards. In 1999 I published an article on this website entitled ‘Flashover Pathways’ which investigated the effects that ‘point to point’ air tracks have on the flashover phenomenon. Some of my earlier articles proposed a phenomenon that became known as ‘high pressure backdraft’, where exterior wind effects cause an undesirable increase in pressure inside a structure. Unlike a ‘backdraft’, the wind driven ‘forced draft’ fire is caused by air being ‘forced’ in rather than ‘sucked’ into the fire compartment. The outcome may however be the same although the tactical approaches may well be different from a firefighting point of view.

Further research by scientists at the University of Manchester in the UK have looked at how air flows into windows affect the rate of heat release inside a fire compartment and how the external flaming effect may spread the fire. They have further looked at the wind driven forced draft effect which is created where –

There are additional factors involved that can dramatically influence the rate of burning, being exterior wind effects or interior air movements caused by natural influences such as stack effect in tall buildings.

Having been on the wrong end of such a situation on more than one occasion I can assure you its not an experience you need! The wind driven forced draft fire is also a killer of firefighters and is most certainly a situation you need to plan for; train for and equip for. This is a warning to firefighters of a fire-ground hazard that may be well known, but is rarely credited with the respect it deserves.

In order to prepare for and deal with wind driven building fires, we must address the following –

Such fires are renowned for creating havoc on the fire floor and, although most commonly encountered in tall buildings, this hazard may also affect your strategic approaches at ground level on a day where wind is gusting moderate to heavy.

If you look back at fire reports there are countless incidents where wind speed and direction has played a major part in causing abnormal and rapid fire development. Such fires may burn with great intensity and create excessively high temperatures, forcing firefighters to retreat from their position with great haste. Many others have not always been so lucky.

As an Incident Commander, make sure you account for this hazard when you position and flow the primary attack hose-line. Never under estimate the potential effects on the rate of heat release where a second opening is created (point to point air-track); or where an exterior wind (or interior stack effect) might initiate an event of rapid fire development that overcomes the capability of the hose-line in use. If you care about your firefighters you need to make them aware of these hazards.

‘Momentum’ and inertia forces may also exist inside a structure that will directly affect the likelihood and intensity of various rapid fire phenomena. These could be related to air-flow dynamics caused through –

Whilst many scientists have suggested that cool air flowing, or being drawn, into a structure might have some cooling effect on the hot gases accumulating inside a fire compartment, we have learned through experimentation that the opposite effect is more likely! In situations where the outside air is cold we have observed more frequent events of rapid fire phenomena that occur with greater intensity, than where the air is warmer. These conditions are easily replicated in small ‘dolls house’ flashover demonstrators and even in larger steel shipping containers to some extent.

This may suggest that the specific gravity, or weight, of air features in these flashover momentum or inertia forces in some way. As the air exchange occurs in a compartment fire, with hot gases leaving the compartment and cold air replacing them, the density of of the outside air may have some effect on the severity of any subsequent rapid fire phenomena. As colder air becomes more dense, the air exchange with heated gases in a fire compartment may be more aggressive.

The relevance of this is that rapid fire phenomena may become more likely, and indeed more fierce, on a very cold day, especially in sub zero temperatures and this has been noted in several real fires.