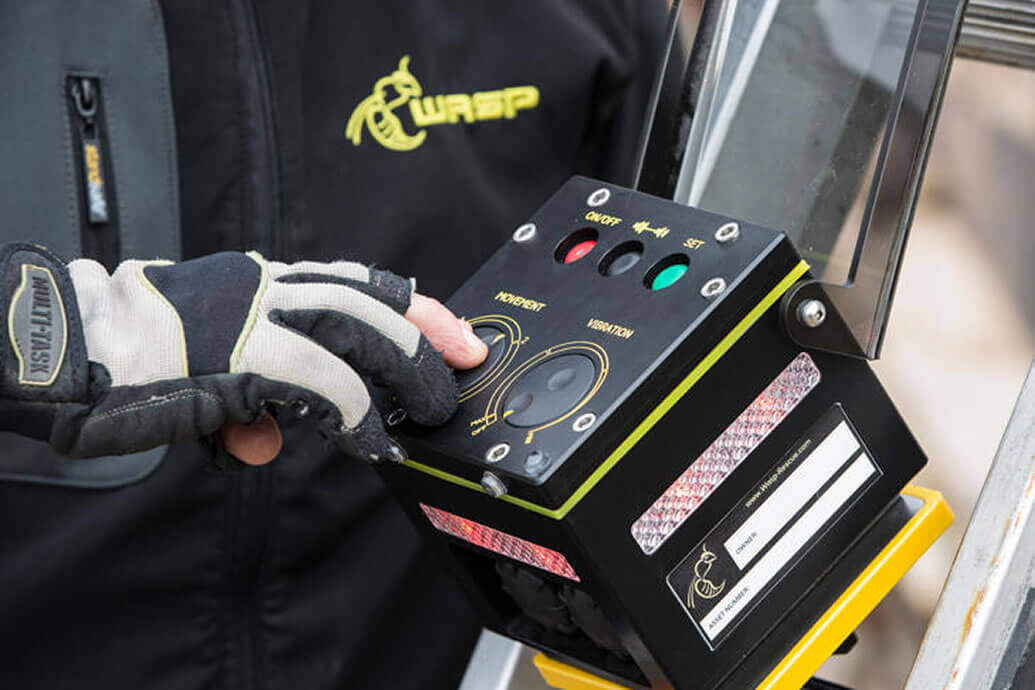 It is always exciting when a new product comes to market, but even more so when a product is developed from an idea that presents itself during challenging and dangerous rescue scenarios.

The WASP, attaches to any surface in any position and provides an early warning of movement and vibration providing protection from:

Here is the WASPs incredible story

WASP was born in the UK but its roots trace back some 5,500 miles to one of the worst natural disasters to ever hit India. The Indian earthquake on January 26th 2001 claimed more than 20,000 lives, left 166,000 people injured and more than 600,000 homeless. It lasted little more than two minutes but its force, peaking at 7.9 on the Rickter Scale, was immense, destroying more than 350,00 homes in the process and devastating the region of Gujarat.

Greater Manchester Fire Fighter Matt Keogh was part of the International Search and Rescue team deployed to Burj, the town closest to the epicentre of the quake and now raised to the ground by two minutes of total devastation.
Having endured a 16 hour flight Matt and his International Urban Search and Rescue team arrived three days after the quake had hit and a scene of total devastation – and very little hope of finding any more survivors.

“It was an horrific earthquake. We got there two or three days after the earthquake because it is so far to get there. We were tasked to search a building and there were about 70 people still missing,” Matt explained. 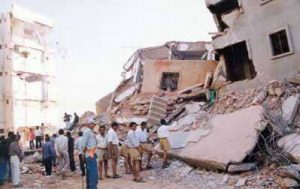 The building had been searched twice before, once by a search team and once by an army team.  Where others had previously searched but failed to find signs of life, Matt and his heroic team persisted, scrambling through the tiniest of gaps, placing their own lives very much on the line.  Despite the constant tremors created by aftershocks, which served as a very real reminder of the danger, they refused to give up, buoyed by a frantic father who seemed certain his wife and child had somehow survived when so many had not.

Then, a voice. Somewhere beneath the rubble the faintest of noise but most definitely there was a voice. Three days after the earthquake had first hit, and driven by the possibility of finding survivors Matt and his team dug for seven-and-a-half hours until contact was made.  Matt recalls “we managed to locate a little lad in there, a four year old boy and we got him out and his Mum after seven and half hours of digging”.

First they managed to create enough space to send down a hose and a lifeline with water, then, sometime later, a gap to haul the boy and his mother free.

Matt explains “We could hear the little boy but we didn’t know where he was. He was probably about 15 foot below the surface and was in a little void. We thought he was with his Mum but she wasn’t making any noise so we feared she might not have survived. We knew they were together because the father was outside and he was going crazy.  We were talking to the little boy via the fireman from Leicestershire who spoke fluent Gujarati, he was chatting to him.

The little boy was terrified yet remarkably he didn’t have a mark on him.  He had been buried alive for four days so we managed to get a hosepipe down to him so he could drink. He took some to his Mum and threw it on her face and she woke up. We suddenly heard screaming, she had been trapped under a wardrobe we think but again, remarkably she didn’t have a mark on her.

It was quite a special moment for everyone to reunite the little boy and his mother with their father, it makes all the hard work and effort hugely rewarding and when you know there is a chance of saving a person’s life then you do everything you can to keep them alive.”

The miracle rescue made international headlines with Matt and his Urban Search and Rescue Team praised for their heroic work. The dramatic moment of rescue was even captured on grainy footage recorded by Greater Manchester Fire Service and featured as a BBC ‘999 Special.

But following his return to the UK, Matt, Watch Manager at Salford fire station in Greater Manchester and a veteran of multiple of Search and Rescue missions including Turkey, Macedonia and Algeria began to reflect on the dangers faced by his team.  His concern focused on the protection offered to rescue workers themselves during rescue attempts – and more importantly the outdated methods used to monitor collapsed buildings and other structures.

Prior to WASP, emergency service personnel would perform a building monitoring triage. It involves putting lines on things, something as crude as if you see a crack you put a wedge in it and if it falls you know the crack has widened.  The problem is if you don’t see the wedge fall through you often don’t know.  In many occasions rescue workers rely simply on a colleague with a whistle who is tasked to sound an alarm if he or she feels the rubble pile may be moving, a practice open to human error. 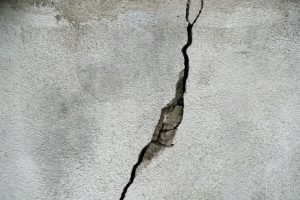 Matt added: “I started to think about the building we were in when we searching for the little boy. That building could have come down at any time. We were trying to work out where this little lad was – you could hear him but you don’t know where he is and when a building collapses everything moves. You are going through floors that are ceilings and walls that are floors. It is really weird.”

Matt continued “In Gujarat we had five or six floors above us, and it was all over the place, all broken. There is a picture that shows our heads working on rubble just underneath the coving, we had a couple of metres to work in.  The problem for us if we are trying to go through walls or lumps of concrete that could be holding the whole structure up.  We had like 20 tonnes above us and if we begin to go under that and it starts moving things could fall on us or the victims we are trying to get too below.”

Matt searched for a device that might be suitable to alert rescue workers but could find nothing on the market anywhere in the world that would provide the protection he craved for his colleagues.

Fast forward some seven years and a move to a picturesque village in Lancashire followed by a chance meeting with Rory O’Rourke, the CEO and founder of DATUM Monitoring and a conversation that paved for the way for the conception of the WASP.

Matt, explains: “I started looking for things – I was never going to build something, I never dreamt that, but I wanted to find something that would monitor movement. I wanted kit that would keep me and my colleagues safe, I needed it to be robust, water proof that wouldn’t affect our communication channels, it should be able to attach to anything and be portable so we could crawl with it but there was nothing.

In 2003 Matt was seconded to the Fire Service College in the Cotswolds for three years, and the idea of finding a device to track building stability slipped to the back of his mind.  Then he moved to Lancashire and met a local businessman.  Matt recalls: “I told him about my work with ISAR and he was interested and explained that his business, DATUM Monitoring specialised in the monitoring of structures and it was clear we had a lot to talk about.”

Rory O’Rourke founded DATUM Monitoring in 1999. The geotechnical, monitoring and surveying experts are based in Bury, Lancashire and have six offices across the UK as well as international bases in Canada and America employing more than 120 people.  They have specialists divisions that focus across a number of sectors but perhaps most notably the rail industry where they have become a crucial partner to Network Rail in keeping commuters safe by monitoring tracks, viaducts and tunnels for movement and changes in temperature.

“I was fascinated to listen to Matt and learn of his experiences. There can be no greater honour than having the ability to save a life and to consider the dangers and risk these guys place themselves in to help people they’ve never met before is really quite heroic,” Rory explained.  “It was clear that Matt knew exactly what was required to help him and his colleagues but it simply didn’t exist and that is where DATUM and our team were able to step in.
DATUM provides continuous monitoring and surveying solutions for clients but also creates bespoke equipment designed for unique scenarios and our team of engineers set about bringing Matt’s vision to a reality.”

For more than two years the team at DATUM worked with Matt creating the device he had envisioned. It needed to be portable, lightweight and yet sturdy, it needed to be suitable to connect to anything and in any position, monitoring for both movement and vibration.

Experts in International Urban Search and Rescue, UK firefighters and engineering experts contributed towards the development of WASP which was finally unveiled to the world in 2015.

“It has been a long journey since my initial idea but actually the development of the product from concept to reality has moved incredibly quickly thanks to the team at DATUM” Matt added. “In two years we moved from development to the first physical version of the WASP and onto the final version which is now in deployment.”

The result is small, lightweight and very portable and can be used safely very quickly providing an audible and visual alarm if it detects any movement in the immediate surrounding area.

The WASP is useful in a variety of emergency scenarios including Road Traffic Collisions, Trench Rescues, fires that have weakened a building, falling trees or basically anything that could move and hurt a member of the emergency services and members of the public.

The information in this article was obtained or provided by Wasp Rescue.  For more information visit:  https://www.wasp-rescue.com/