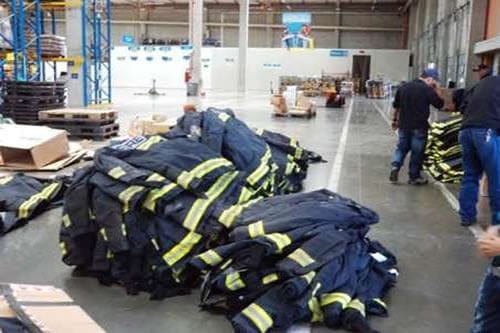 Fire departments rely on Volunteer Firefighters in Colombia, excluding the capital city of Bogota, most are volunteers with some state and local government aid. Others such as Cali are run as private enterprises raising funds from the district and local businesses.

It has been estimated that at least 20% of the 100+ municipalities have no fire and emergency cover whatsoever. Of those that have a fire department many have no PPE, fire appliances or ladders. They respond to emergencies on bicycles, motorcycles and their own cars, wearing only overalls and boots.

In the years that DSFRS has been assisting with the development of the emergency fire and rescue resources great progress has been made in some municipalities but there is work still to be done.

Aid Project Manager, Peter Sandel said, “We (Volunteer Firefighters in Colombia) are very grateful for the [Ballyclare] donated PPE which will be put to very good use. On this occasion we will be concentrating on the south of the country (departments of Valle de Cauca, Cauca, Huila, Caquet, Putumayo and Nario) which have been particularly hard hit by the ongoing terrorist problems which stunt normal community development leaving many volunteer fire departments devoid of any PPE.”

Ballyclare Limited is committed to supporting fire and rescue communities across the world. We would like to commend Devon & Somerset Fire and Rescue for the work they undertake in South America and are pleased we were able to help in some way. We wish the Colombian fire and rescues services well and are glad to be able to provide them with protective and safe firefighter clothing while they navigate the dangerous situations their roles require.

The information above was in conjunction with a report provided to Ballyclare Limited by Devon & Somerset Fire and Rescue.