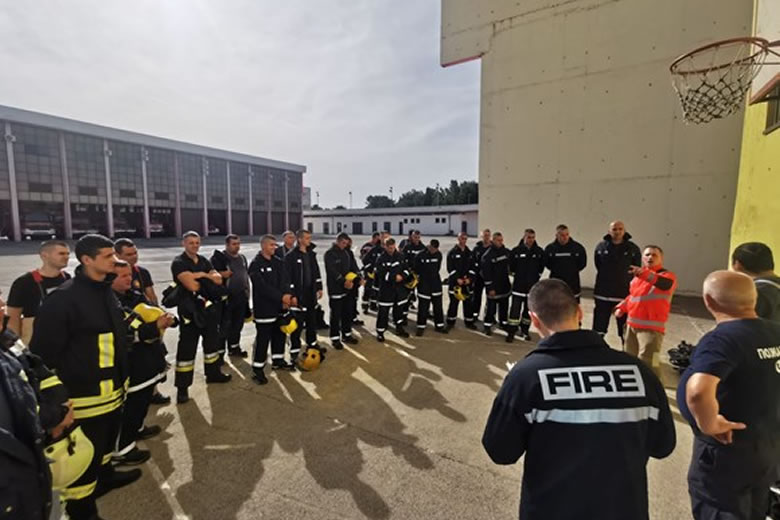 A volunteer team of firefighters from Greater Manchester have provided specialist firefighting and rescue training to their counterparts in the Balkan state of Montenegro.

The six-strong Greater Manchester Fire and Rescue Service team joined up with the Association of Firefighters and Rescuers of Montenegro and the British Embassy through the UK fire service humanitarian charity Operation Florian.

Over the course of one week, the team were involved in training more than ninety-five firefighters. The key aim was to enhance the skills and knowledge of the Montenegrin firefighters to improve firefighter and public safety.

The training took place in the capital city of Podgorica and the town of Berane in the north of the country. The training included both practical and theoretical training in; incident command and multi-agency working, breathing apparatus, road traffic collision rescue and swift water rescue.

The Greater Manchester team had the opportunity to train together with Macedonian, Serbian and Montenegrin firefighters in Berane. This was the first time that groups from these different countries had been given the opportunity to take part in this type of training together.

In Podgorica, the team also supported the training of the country’s first woman firefighter.

Station Manager Steve Twinn said: “Working in Berane with local and surrounding fire stations has provided a firm base for future training. It has developed relationships locally, regionally and nationally. As well as securing the foundations for future training in the UK.”

We hope that the Montenegrins will be able to raise funds to bring a team of firefighters to the UK early next year to provide instructor training.

Fundraising is also taking place to send two women firefighters from Montenegro and Macedonia to attend next year’s Women in the Fire Service national training weekend.