Urgent action needed to protect firefighters from risk of getting cancer 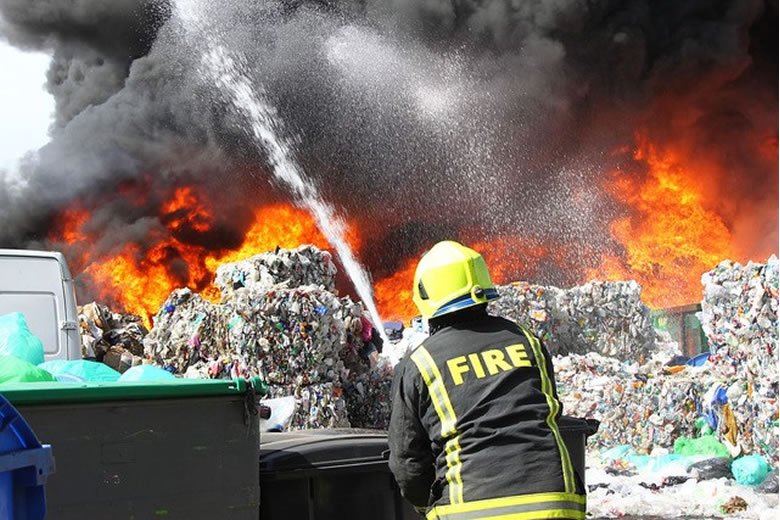 Urgent action needed to protect firefighters from risk of getting cancer, scientists find

Ground-breaking research has revealed the serious health risks to UK firefighters following exposure to toxic fire effluents, the chemicals emitted during a fire, in an independent University of Central Lancashire (UCLan) report commissioned by the Fire Brigades Union (FBU).

The work is a UK first and the latest in a growing body of international evidence suggesting an increased risk of firefighters developing cancer and other diseases. Fires produce a cocktail of toxic, irritant and carcinogenic chemicals in the form of aerosols, dusts, fibres, smoke and fumes or gases and vapours.

The report includes a summary of UCLan’s testing on-site at 18 fire stations as well as over 10,000 responses to a national firefighter survey run jointly between the FBU and UCLan.

Indoor air testing at a number of fire stations and training centres highlighted that UK firefighters are still being exposed to the high levels of toxic contaminants during and after a fire, as cancer-causing chemicals remain on PPE clothing, equipment, and elsewhere at the fire ground. Test samples revealed carcinogens inside firefighters’ helmets, on PPE, and even on breathing apparatus mask filters.

More than 10,000 currently-serving firefighters were surveyed in order to better understand UK decontamination practices and the prevalence of illness, revealing:

Scientists have created a best practice guide for fire and rescue services, putting forward a number of urgent recommendations to minimise firefighters’ exposure to toxic fire effluents. This includes:

In most states in Canada and the United States, presumptive legislation recognises certain cancers as occupational diseases amongst firefighters.

In the UK, it has so far been concluded that there is not considered to be enough evidence to link occupational exposure to carcinogenic fire effluents and the higher risk of cancers. This means that, if a firefighter believes their illness is work-related, they are required to prove it – an almost impossible retroactive task.

Ahead of the report’s publication, the Environmental Audit Committee recommended that the Health and Safety Executive implement its report’s recommendations on improving firefighters’ work environments (NOTE 2). In response the government confirmed that it would instruct HSE to monitor the research and to ensure fire and rescue services identify risks to firefighters (NOTE 3).

UK law requires firefighters’ personal protective equipment (PPE) to meet heat-resistance, heat transfer, and water resistance requirements, but it is not required to protect wearers from toxic gases and particulates.

This best-practice report is the first stage of ongoing research examining the link between firefighters’ exposure to toxic fire effluents and the risk of cancer and other diseases.

“Firefighters risk their lives every day to keep their communities safe. But it’s clear that the risk to their health doesn’t stop when the fire has been extinguished.

“Sadly we often see serving and former firefighters suffer from cancer and other illnesses. Every firefighter knows the fear that, someday, they and their family could receive the devastating news – but we’re determined to do all we can to reduce the risk of firefighters developing these terrible diseases as a result of their job.

“There are some hard truths for fire and rescue services in this report – and far more needs to be done to protect firefighters from cancer and other illnesses. And among firefighters, there are still some myths to dispel, which is why regular and up to date training on the risk to their health is so essential.

“This research is a crucial first step to definitively proving the link between firefighting, toxic contaminants, and cancer in the UK. The Health and Safety Executive must urgently implement the recommendations to bring life-saving measures into place as soon as possible.”

Anna Stec, Professor in fire chemistry and toxicity at the University of Central Lancashire (UCLan), said:

“These recommendations are vital if we are to improve firefighters’ health and well-being, keep them safe and prevent exposure to toxic chemicals, which can lead to life-changing problems or premature death. They must be implemented swiftly to reduce the health risks firefighters face.

“This report highlights some of the risks and sources of contamination that firefighters are exposed to on a regular basis, and how these can be controlled. We hope that this guidance will be adopted and used by the fire sector across UK and beyond so the overall exposure of firefighters and their families is reduced.”

Sid McNally joined Essex County Fire and Rescue Service in January 1995. In 2012, when he was 48, his wife noticed a lump on his neck and insisted he go to his GP, who referred him to the hospital.

They took a biopsy of his neck and decided to remove the lump. After surgery, he was diagnosed with cancer of the base of the tongue. The consultant asked how many cigarettes he smoked per day, but he had never smoked.

The consultant had already diagnosed one of Sid’s colleagues, Steve, with the same head and neck cancer. Tragically Steve, also a non-smoker, died several years later.

“I feel I was lucky as my cancer was identified at an early stage. With chemo and radiotherapy treatment, I managed to return to work in just over six months. Sadly my mate Steve, who I’d served with on the same watch for three years, did not survive.

“Contaminants were not understood for much of my time in the service and therefore weren’t taken seriously. When I joined, we wouldn’t even wear breathing apparatus when attending fires in the open, including care fires. Nowadays there are a lot more precautions and my station definitely overcame that badge of honour culture where we were proud of our dirty kit.

“I believe if the current recommendations had been in place when I first joined the service, I am in no doubt that they would have made a difference to me and my colleagues. If we’d known and we’d had these measures, we’d have used them and fewer of us would have got sick.”

The independent scientific research was commissioned by the Fire Brigades Union (FBU), the trade union representing firefighters and control staff in the UK. The research was part funded by the FBU and the Firefighters 100 lottery.