Home Fire Fighting Articles Training for Marine Firefighting – what do you need to know?

Training for Marine Firefighting – what do you need to know? 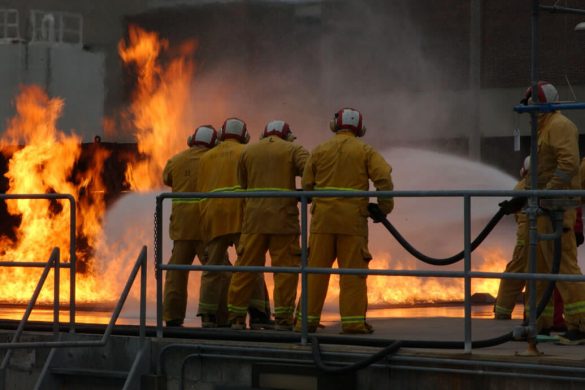 A fire on a ship has similarities to land-based fires. However, firefighters can have the mistaken attitude that a fire is a fire, no matter where it is. Experienced firefighters understand that you never stop encountering new things and learning from them. Every fire is different in some way or another so Training for Marine Firefighting is different. That’s what makes this job so interesting.

There are many crucial differences between training for marine firefighting on board a ship and fighting a structural fire, a good example being access. Unlike a building, there are no doors to get on to a ship at anchor. There may be an ‘accommodation ladder’ angled and unsupported down the side of the ship.

If you are then able to step from the pitching and rolling deck of your boat onto this ladder you will find that each step will send this possibly thirty year old, 80-100 foot, unsupported accommodation ladder bouncing several feet up and down. Just climbing this thing is a chore. Add bunker gear and it becomes an exhausting and unsafe challenge! What about your tools, masks, hose and any other special equipment that will be needed? The equipment problem is answered by looking on the deck of most large ships. They must load and unload their own supplies and heavy machine parts so there will be some form of lifting device. Whether it is a boom, a davit or a crane, it is the best way to get your equipment and fire gear aboard.

Once aboard you will be confronted with something you might be familiar with. It is a high rise building with about a dozen major operating systems. Only this building is on its side, and can move. Just as building construction is important to structural fire fighting, knowledge of ship construction can be the difference between life and death to shipboard fire fighting. If you get lost during a search (very common at ship fires) the knowledge of bulkhead and frame markings may either lead you out, or enable help to get to you.

Some questions you should ask yourself are:

There are several places aboard ship where detectors and alarms will indicate the source of smoke and heat. Would you know where to find them? After you determine the location of the fire, how are you going to get there? Aboard ships there are several sets of fire plans and ship plans which will give you the layout of the ships decks, stairs, phones, watertight bulkheads, self closing fireproof doors etc. Would you know where to look for these plans and if you found them, would you know how to read them?

If you were able to solve the problems I have just presented then possibly you may not need training in Shipboard fire fighting. Personally, I’m not young enough to know everything! I hope I have captured your attention enough for you to realize that you may need this information.

This series of articles is not intended to teach you everything about marine fire fighting. The US Coast Guard combined course in basic/advanced shipboard fire fighting for mariners is 45 hours of lectures and practical application. My articles will only allow me to discuss a few of the problems we just mentioned. I will be writing about a field of fire fighting that has been neglected in both training and budget allocation for many years. I hope that these articles will give you some important safety information but I also want them to demonstrate to you that your fire and rescue service must take marine fire fighting training seriously.

The next article will start with the basics. We will learn the nomenclature of some areas and items aboard ship you will need to know. You don’t have to become an ‘old salt’, but you should know direction aboard. Forward, aft, amidships, bow, stern, port, starboard, below, and above. You will learn the markings on the outside of the ship, the plimsoll line, draft markings, hold bulkhead marks, which will all give you valuable information about the stability of the ship and possibly the location of the fire. We will also mention some of the structural elements of a ship that may apply to marine fire fighting.

In future articles we will discuss vessel stability and de-watering and will feature some shipboard safety and tactical procedures that can be used to advantage to enable your firefighters to operate safely at a shipboard fire and then go home uninjured after the job is done.

Remember, your area doesn’t have to have a port in its district for this information to be important. If your area is merely adjacent to a waterway where these ships pass, you may be called when its engine room erupts in fire as it passes your jurisdiction. You may also be called in on mutual aid to a neighbouring area that does have a port or river frontage. Are you ready?

Tom Guldner is a retired Lieutenant of the New York City Fire Department’s Marine Division and is a Principal Member of the NFPA Technical Committee on Merchant Vessels. His company Marine Firefighting Inc. is involved in consulting and training mariners and land based firefighters in all aspects of marine fire fighting.

For more information, go to www.marinefirefighting.com