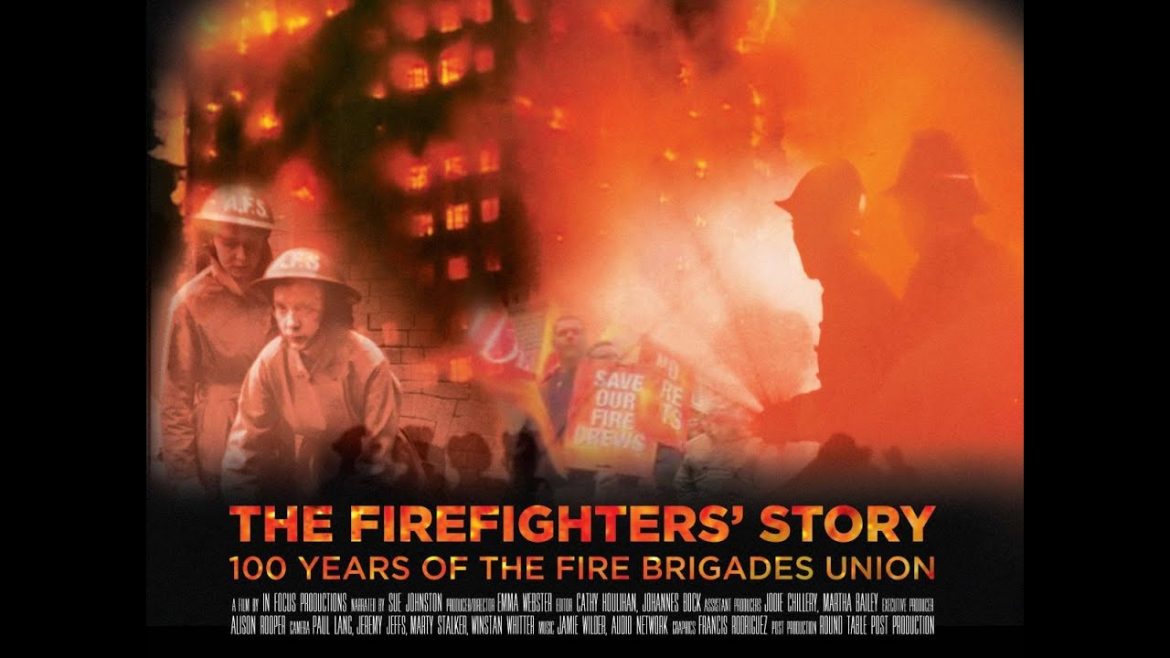 The Firefighters’ Story: 100 years of the Fire Brigades Union traces the history of the FBU since its inception at the end of the First World War, and the contribution the union has made over ten decades to improve public and firefighter safety through its campaigning work.

Known as ‘tombstone legislation’ these improvements generally follow big fire incidents such as the Manchester Woolworths fire of 1979 which resulted in a ban on foam filled furniture. The Firefighters’ Story, narrated by actress Sue Johnson of The Royle Family fame, explores several major fires – such as the Glasgow Cheapside fire of 1960 in a whisky and tobacco warehouse in which 19 firefighters died – and their subsequent impact on safety.

The film, produced by In Focus Productions for the FBU to mark its centenary this year, uses archive footage throughout, including the Blitz which shows the incredible bravery of the firefighters Churchill called ‘Heroes with Dirty Faces’. More than 900 firefighters lost their lives during the war. The often forgotten contribution of the 88,000 women firefighters who worked on the frontline as well as in control rooms are depicted in the film as part of the huge recruitment of auxiliaries who helped the war effort

The film examines the appalling conditions and ‘continuous duty’ system early firefighters worked under, and the militaristic discipline, with pensions unheard of and holiday and sick pay almost non-existent. These firefighters, who lived in fire stations in cramped conditions with their families, were crying out for a union to represent them.

Matt Wrack, FBU general secretary, said: “As we reach the end of our first hundred years as a trade union and start our second, we wanted to mark it in a memorable way. This film will be something for both current and future generations to learn from, not just about the value of firefighters to communities over the last century, but the significant contribution FBU members have made to public safety, and of course the safety of its members.

“The FBU has never been solely concerned with the important issue of members’ pay and conditions – we have always had a wider role in society that is concerned with keeping citizens safe. We are extremely proud to have made such an impact on safety through our long history of campaigning and lobbying. And now, 100 years after we began, we have the Grenfell Tower atrocity to address. We will do our utmost to ensure that policies around social housing, building regulations and fire safety will be extensively improved so that people living in tower blocks are safe.”

The Fire Brigades Union (FBU) is the voice of firefighters and the fire and rescue service in the UK.

The FBU represents over 85% of the uniformed staff of the UK fire and rescue service. Our members are frontline public service workers — covering the roles of firefighter to area manager, including emergency fire control staff and firefighters working the retained duty system.

The FBU is the only recognised trade union negotiating nationally with fire and rescue service employers on behalf of firefighters and emergency fire control staff on the National Joint Council (NJC).