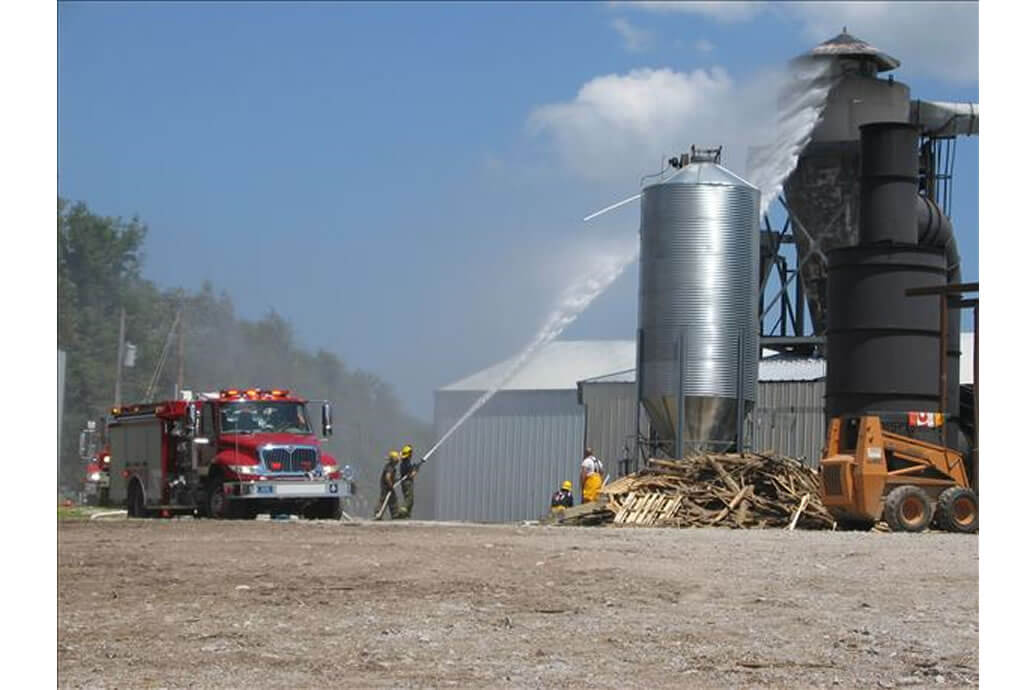 The replacement of fossil fuels with renewable fuels has an impact on fire safety issues in many ways. In particular, the use of solid biofuels presents new risks and challenges for the industry and first responders alike. One common type of refined solid biofuel is wood pellets which are often stored in large silos after production or shipping. In the case of a silo fire, it is important to understand the nature of the fire and to use appropriate fire fighting response tactics.

In order to improve our knowledge of fire development, detection and extinction techniques in silos, two main tests series have been conducted at SP Technical Research Institute of Sweden briefly described below. Experience from these projects has resulted in recommendations concerning proper extinguishing practices.

The main purpose of the first project conducted in 2006 was to study fire extinction techniques in silos and to provide a basis for guidelines concerning the tactics to be used. The project also provided valuable information about the initial fire development of a simulated spontaneous ignition in the stored material and the possibility for early detection of such a fire.

The silo used for the tests was 1 m in diameter and 6 m high. Close to the base of the silo, a ventilation duct was installed, which was used both to provide ventilation to the silo during the “pre-burn” phase and for injection of inert gas during the extinguishing phase. The silo was filled with wood pellets up to a height of 5 m during the tests. Local auto-ignition was simulated using a coiled heating wire placed in the pellets, located centrally in the silo.

The experimental results from one of four tests are summarized in Figure 1. The extension of the pyrolysis zone was mainly downwards, towards the air inlet while a heat/moisture wave, with a temperature less than 100 C, slowly moved upwards, see photos figure 2. Although the distance from the point of ignition to the pellet surface was only about 2.5 m, it took about 20 hour before the fire could be detected by gas analysis in the top of the silo, clearly indicating the problems of early fire detection of smoldering fires in silos. 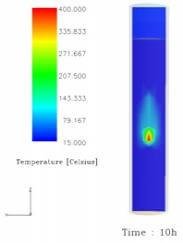 Figure 1. Visualization of the recorded temperatures inside the silo during one of the fire tests. 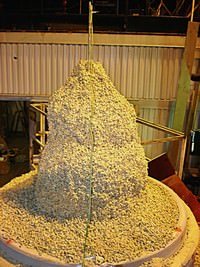 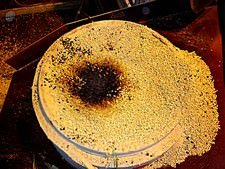 Figure 2. Photos taken during dismantling of the silo. Left – the pellets formed a congealed pile in the top part of the silo. Right – the pyrolysis zone about 0.5 m below the ignition source.

The purpose of the second project, conducted in 2008, was to investigate how nitrogen should be injected into a real silo during extinction to achieve optimal gas distribution. The experiments were performed in a 300 m3 steel silo with a diameter of 6 m and a height of 10.5 m and filled with about 260 m3 of wood pellets, see Figure 3. In total, five gas filling tests were conducted where the gas was injected from the centre of the base of the silo, or alternatively at one point along the silo wall. All tests were conducted in a “cold” silo (no fire) as the main focus was to study the gas distribution in the bulk material. The tests showed that the gas distribution was significantly influenced by the gas flow rate, the location of the inlet and the properties of the bulk, showing the need for several distributed gas inlets when inerting large diameter silos. 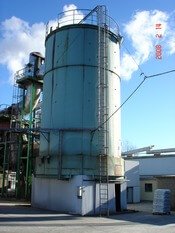 Figure 3. Photo of the 300 m3 test silo used for the gas distribution tests.

The results from the first silo project have successfully been applied to several real silo fires in in Sweden. In one fire incident, auto-ignition occurred in a silo, 47 m high and 8 m in diameter, filled to about 40 m with wood pellets. Elevated temperatures had been noted for some time and it was planned to empty the silo within the next few days. However, before such action could be taken, smoke was seen emerging from the top of the silo and the fire brigade was called. Initially, extinction was attempted using the application of liquid CO2 to the top volume of the silo. Approximately 35 tons of CO2 were applied intermittently over a period of approximately 18 hours. The application seemed to control the fire but it was not possible to verify how much of the gas penetrated into the bulk. Consequently, it was not possible to determine when a discharge operation could be safely started.

Nitrogen was therefore injected close to the silo base according to the recommendations from the silo experiments in 2006. In order to control the effect of the gas injection, temperatures and concentrations of CO, CO2 and O2 were measured in the top of the silo. In total, nitrogen injection continued for almost 65 hours without interruption until the silo content was discharged. Approximately 14 ton of nitrogen was used, which gives a total gas consumption of approximately 5.6 kg/m3, well in line with the recommendations from the research project.

Based on both the results of the research projects and practical experience of real silo fires the following recommendations are given:

Henry Persson is working as a Project Leader at the Fire Dynamics section at SP, the Swedish Technical Research Institute, mainly with testing and research in the area of, fire protection, fire extinguishing systems and extinguishing media. He has been working at SP since 1979 and is actively participating in the International and European standardisation work as the principal Swedish expert. The ISO group for fire fighting foams, ISO TC21/SC6/WG4, has been chaired by Mr Persson. Mr Persson has been project leader for a large number of BRANDFORSK projects and was the project leader at SP for the EU foam research project FOAMSPEX and has been participating in several other EU-projects.