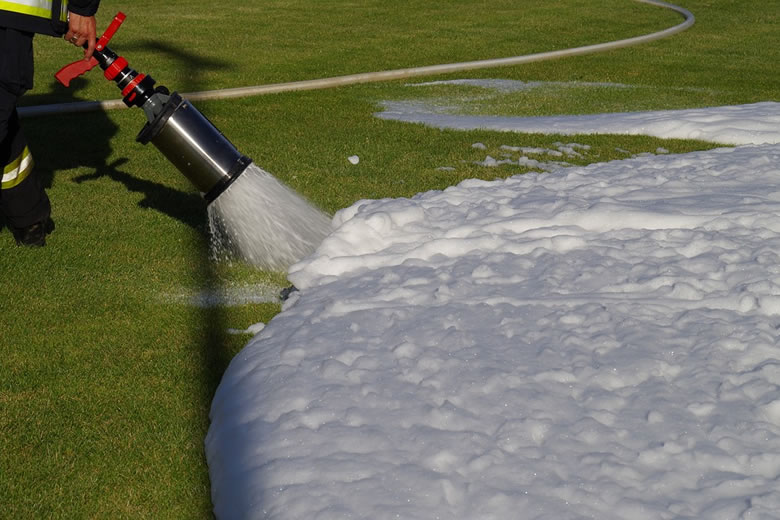 When the serious discussions started around 2010 about high performance Fluorine Free Foams (long before we had added the aconyms of SFFF, PFF, FFF or even NFF) one of the common lines we heard from the industry was that foams without fluorochemicals were “nothing new”. As a statement was entirely correct as pure protein foam were around before the invention of AFFF, and then when synthetic chemicals started to be used we introduced dedicated Class A foams and multi-purpose (detergent) synthetic foams that could be deployed as low expansion foams even if they were developed primarily as medium or high expansion foams.

Firstly these chemicals were Oleophobic which basically meant that they did not want to “mix” with the hydrocarbon chemicals in the fuels, and tended to resist or repel the fuel from the outer wall of the bubbles. In firefighting terms this meant that the bubbles did NOT pick up the fuel when the foam was directed onto a burning fuel surface.

Secondly the fluorosurfactants in the foams impacted what is known as the interfacial tension at the fuel / foam interface and this lead to the creation of an aqueous layer being created between the fuel and the foam bubbles. Foams that were able to create this layer became known as “Film Forming Foams”.

With many years of development and a limited number of foam manufacturers, manufacturing foam products following a similar formulation, it is understandable that the fire performance standards and associated design standards were based on the PFAS containing foams.

When you consider what could be called geographically based standards from UL and FM, over EN, then EN 1568 adopted a rating system and EN 13565-2 (the foam system design standard) applied correction factors on the minimum application rates depending on the fire performance rating achieved in the EN 1568 fire test ! UL and FM adopted a PASS / FAIL approach but tied the fire performance test into foam qualities (expansion ratio and 25% drain time) achieved with real world discharge devices. UL and FM also had specific test criteria for foam sprinklers whereas EN just stated that foam agents needed IA, IB or IC rating to be used in non aspirated sprinklers !

Foam manufacturers, end users and the standards bodies however had some 50 years of experience and the knowledge that manufacturers were basically following the same basic receipe when formulating their foams. PFAS containing foams were regarded as forgiving and with good tolerances for different fuels and different discharge devices.

Where strict adherence to a “UL or FM System” was not required it was fairly commonplace to see suppliers and consultants accepting hardware and foam that was not necessarily tested and approved together. Of course under EN 13565-2 this was not a necessary requirement as the standard was absoluted based on the assumption that one foam with a top side performance rating would perform the same as another foam with the same top side performance rating !

The transition to fluorine free

Industry is beginning to understand that we are dealing with new technologies in the foam formulation. Unlike PFAS containing foams manufacturers are not following (at the moment) the same basic receipe. Current comercialised SFFF’s are based on each manufacturers’ formulations of chemicals, have different physiochemical properties, and exhibit very different performance across different fuels and with different application techniques. Rightly, or wrongly, as SFFF’s started to be marketed there was a lot “negative marketing” that went beyond questioning the difference in performance to actually questioning whether or not SFFF’s “actually worked”.

This has led to end users, specifiers and consultants questioning the ability of the foam for their application. At Fomtec we welcome these questions as this allows us to discuss the holistic approach to the transition away from PFA containing foams, whereby the foam concentrate is “part of the solution” and needs to have been tested and approved with the foam proportioning and discharge devices. Fomtec as a manufacturer is well aware that current SFFF’s are reliant on the foam blanket, and within this the stability of the bubbles, to suppress a fire, and our testing is focussed on determining the limits of performance with all the discharge devices we test with, on the different fuels !

Fomtec has never tried to claim that litre for litre that our Enviro SFFF’s are equivalent drop-in replacements for a good quality AFFF or AR-AFFF. Like the transition from Halon 1301 Fomtec, and our competitors, are striving to make the best performing alternative firefighting foam that meets the environmental legislative requirements as well as the firefighting performance standards!

Whether a new requirement or planning the transition away from PFAS containing foams the end user is looking for answers on what foam to purchase / specify based on specification, suitability for their mission and of course price and availability. When they study most manufacturers data they will be looking for statements on the approvals that the product holds !

As stated earlier in the article the test standards are mostly written around the knowledge of the performance of PFAS containing foams. Although in their infancy, we see that SFFF’s currently do in general exhibit more sensitivity to different fuels, to the type of water used to create the foam solution, to the foam qualities generated by the discharge devices (and hence the performance of the discharge devices across their flow range / inlet pressures), and to the type of discharge device (forceful – type III, or gentle – type II).

We see that end users and consultants are now asking whether the approvals on the foam they are now being offered are relevant for their real world applications. For Fomtec we believe that the tolerances with SFFF’s are currently smaller than we saw with PFAS containing foams and this is part of the reason that the Enviro Programme includes more than 1500 fire performance tests (so far).

How does an end user decide what test standard to apply when choosing an SFFF?

Sometimes the end user is not going to be given a choice because of the legal or insurance requirements of the location or the mission / application. For example if they are municipal fire brigade in Belgium they might have a requirement to use an EN 1568 -3 and -4 approved foam, or if they are the Fire & Rescue Service at an airport in the UK that requirement maybe to use the minimum of an ICAO Level B foam.

In general the ideal situation is to apply, and request, the test standard that most closely mimics the real world application of the end user. It is completely impractical to expect all applications to be covered but we can look at some areas that are covered in some of the common test standards:

Most standards currently work on a grouping system or have a set fuel that is used in the fire testing. When we look at hydrocarbons this is most commonly heptane, although under ICAO it is Jet A-1 or Kerosene, and currently for Mil Spec it is Gasoline (Under the proposals for a new fluorine free Mil Spec for land based facilities two fire tests will be carried out on Gasoline and Jet A-1).

When water miscible fuels are considered the usual fuels used to represent the fuel groups are IPA (for alcohols) and Acetone (for ketones), although under UL and FM it is quite common to see additional fuels being added by different manufacturers.

For a topside device such as hoselines, monitors, foam makers water immiscible (hydrocarbons) always start their test programmes with a direct (forceful) Type III application, whereas for water miscible (polar solvents) the programmes use an indirect (gentle) Type II application.

For EN 1568-3, ICAO and IMO the nozzle is fixed for the duration of the application, whereas for UL and FM once 90% control is achieved an operator is allowed to pick up the nozzle and to move around 2 sides of the test pan. For the DOD Mil Spec the operator manual fights the fire immediately and is allowed to move all the way around the circular test pan. For the water miscible fuel fires under all the fire performance test standards the application uses a fixed nozzle and the foam is directed at a backboard on the test pan and allowed to slide down the board onto the fuel surface.

Standard (non aspirated) and foam/water sprinklers (aspirated) test protocols such as UL 162, FM 5130 and VdS require that a grid is arranged over the test pan and the test protocols define nozzle spacing, elevations and flow rates per nozzle.

Where are the deficiencies in the test standards?

Performance on different fuels with SFFF’s is a major issue as even on hydrocarbons the question of just allowing heptane as a representative fuel is being asked by the standard bodies. The latest FM 5130 standard (May 2021) already states under 4.2.2.3

“When testing SFFF concentrate, Heptane is considered representative of hydrocarbon liquids with the following characteristics:

Data from the testing at Fomtec would indicate that grouping of the polar solvents and working with the reference fuels of IPA, for alcohols, and Acetone, for ketones is just as problematic.

Finished foam qualities of expansion ratio and 25% drain time are extremely important with SFFF’s but many of the test protocols use a set nozzle and pressure as part of their approval that variations in foam qualities are not taken into consideration. UL and FM for their top side approval testing DO require that foam qualities used in successful fire performance testing are matched to foam discharge devices. At the other end of the scale the current EN design standard for foam systems EN 13565-2 has the statement when considering non aspirated discharge devices: “Consult manufacturer”

It is certainly arguable that the foam manufacturer should be able to provide good advise, but there are no standards or test protocols mentioned ! It was mentioned earlier that the same EN design standard removed the requirement for foam with IA, IB or IC when considering non aspirated sprinklers, but again the change was to “Consult manufacturer” !

The future of foam

Anything we say here is an opinion, but we would like to say it as a “considered opinion”. Expect standards and testing that expands the hydrocarbon fuel testing required, and potentially some more fuels as test fuels in the water miscible.

The EN 1568-3 committee is looking at adding some variation in expansion ratio into the test protocol, and hopefully they will also consider the importance of 25% drain time ! We can also hope that the “consult manufacturer” is withdraw and replaced with reference to an internationally recognised test.

Here at Fomtec the development programme we named the “Enviro Programme” continues and we are well over 1500 fire tests now as we add data for different fuels, different foam qualities, different discharge devices and operational techniques. When a client asks questions about SFFF our responses will be based on data not opinion !