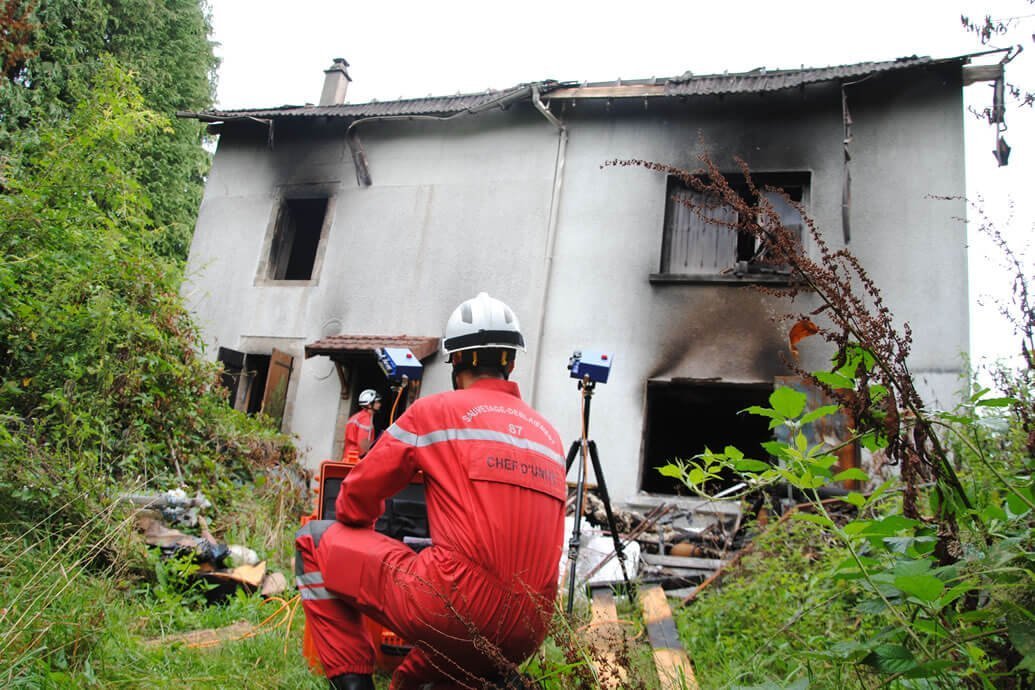 Here is the testimonial of Lt. Jeremy LAVERGNE – Rescue and Clearance Section Chief:

“Like all Fire Departments, SDIS 87 deals with the problems raised when structures collapse following fires, explosions and so on. A certain number of accidents or near-accidents (chimney or roof collapse near personnel during attack or clearance phases) have encouraged SDIS 87 to design safety procedures to reduce the risk of injury caused by elements falling on fire and rescue personnel.

Led by SDIS 87 Rescue & Clearance unit personnel, these discussions have enabled a certain number of procedures to be put in place to monitor and alert personnel involved in order to clear a site quickly and effectively if there is a risk of collapse. Despite everything, it is not easy to detect problems in buildings and the traditional method of dedicating a safety observer (personnel responsible of structure stability monitoring) would appear to be the weak point in the system.

This is why we have put all our efforts into finding an automated system that would enable us to Introduce equipment more accurate and reliable than the human eye. After a testing process we chose the movement monitor, LEADER Sentry Movement Monitor.

Since purchasing this equipment it has been mobilised at the request of the Rescue Operations Commander, either with the Research, Rescue and Protection Unit and all its equipment, or transported on its own by a unit manager responsible for operating it. Presented during Senior and Firefighting officer training, this equipment has been used increasingly more often as more and more personnel are trained to use it, demonstrating that it provides a solution to a significant field problem.

Initial feedback shows that it is used most often to secure post-accident clearance phases when building frontage or structural elements are threatening to collapse. To a lesser extent (but still consistent with the operational statistics), the equipment is used to protect personnel while extracting victims from building collapses or during monitoring operations while a rescue and clearance section manager assesses building damage.

In conclusion, the LEADER Sentry Movement Monitor is fully operational at SDIS 87 and seems to respond to significant requirements in the field. However, the personnel operating on site must not lower their guard, but the LEADER Sentry is a useful addition to simple human observation. The LEADER Sentry B2 (LEADER Sentry equipped with two lasers) allowing the monitoring of two different structures or two axes of the same structure, increases its detection capacities and its geographic coverage area. This equipment plays a vital role in post-accident site security policy.”

For more information on LEADER group please visit their website at www.leader-group.eu/