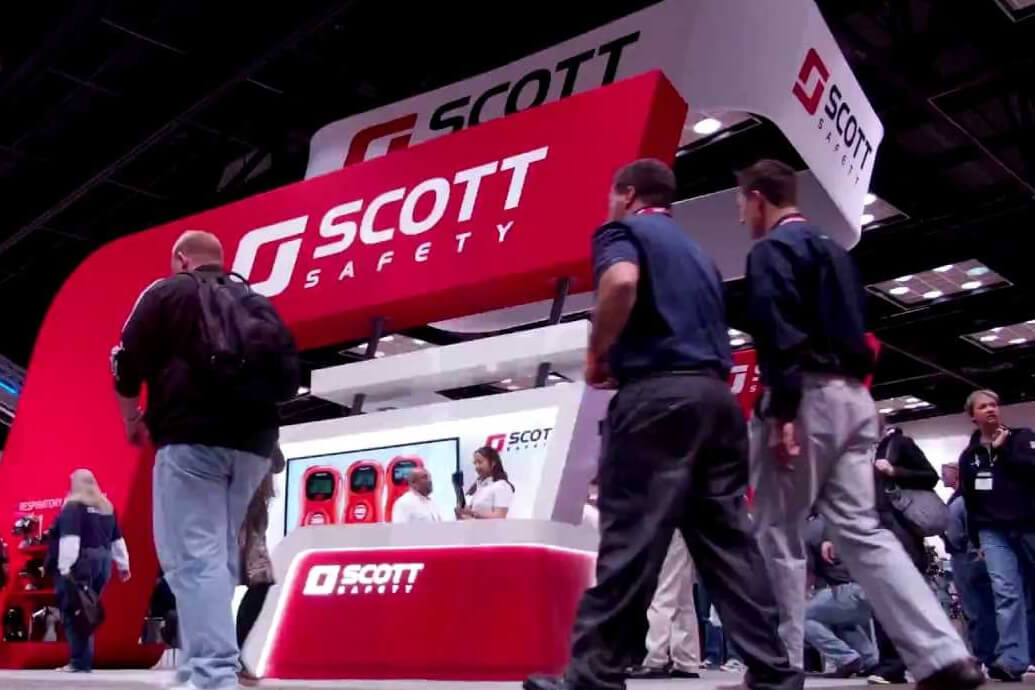 Record numbers of fire buyers met at one of Scott’s three show locations at the world’s flagship exhibition for the fire prevention. The disaster relief and safety and security community had the opportunity to see live demonstrations of new products designed to reduce user burden and incorporate real-time telemetry, situational intelligence and communications in hazardous environments. These technologies were fixed, portable or even deployed via a robot to provide intelligence on the specific makeup of the fire and highest risk factors.

Testament to the company’s determination to be the leading innovator in equipment for firefighters and first responders, Scott Safety’s future gazing, invite only “Firefighter of the Future booth called for leading firefighting officers and other key stakeholders to join the Scott Safety team and share in its newest thinking. Invitees were shown the latest Scott Safety innovations, reflecting the change in the way that the business is looking at the future of safety in this arena.

Scott Safety was also proud sponsor of the coveted 2015 Toughest Firefighter Alive (TFA) competition. Located outside the exhibition hall, this challenge drew huge crowds and countless daily competitors, hoping to prove their strength and skill. This trial of strength, co-ordination and fitness for individual firefighters and teams is acknowledged to be the world’s hardest firefighting competition.

For firefighters entering the unpredictable environment of an inferno, the latest X-380 thermal imaging camera powered by ISG Technology was one to look out for. The camera now utilises both hot and cold spot tracking to enable firefighters to navigate in the safest areas. Using this technology, firefighters can instantly see and create paths through cooler spots and avoid the highest risk areas such as floors or ceilings likely to collapse in the blaze. The cold spot tracker enables first responders to locate and pin point thread or valve gas leaks as gas in general will be colder in temperature than the environment surrounding it.

The latest portable gas detection technologies were also on show including the BM25 transportable multi gas detector from Oldham. This solution bridges the gap between Scott’s portable and fixed gas detection range, packing all the benefits of a fixed system area monitor in to a rugged, user-friendly and transportable instrument.

For firefighters keen to procure SCBA, Scott Safety not only showcased the ProPak-f and ProPak-fx, part of its hugely successful ProPak range but also gave visitors the chance to try it on. Both products offer an unequalled level of performance and user comfort with the ProPak-fx featuring an adjustable backplate on a rigid backframe construction for durability and performance. The Scott Safety ProPak-f/ProPak-fx can be specified in a number of configurations including Split Demand Valve Coupling (SDC), Y-Piece (Y2C) and attachments for Airline, which can also be used for Rescue Second Man and decontamination purposes.

Visitors to the stand could also see an exciting example of Scott Safety’s work with partners to help advance the capabilities of its technologies. Acting as the ‘eyes’ of the brigade, the portable ROV1 robot from a British brigade Scott Safety works with, can now be deployed to get closer to a burning building than is physically safe for firefighters and provide imagery and data that would otherwise be unattainable. Using the X380 thermal imager, firefighters can pinpoint the centre of the fire and essentially ‘see’ through the smoke to plan their extinguish plan.