Retained Firefighters in the UK 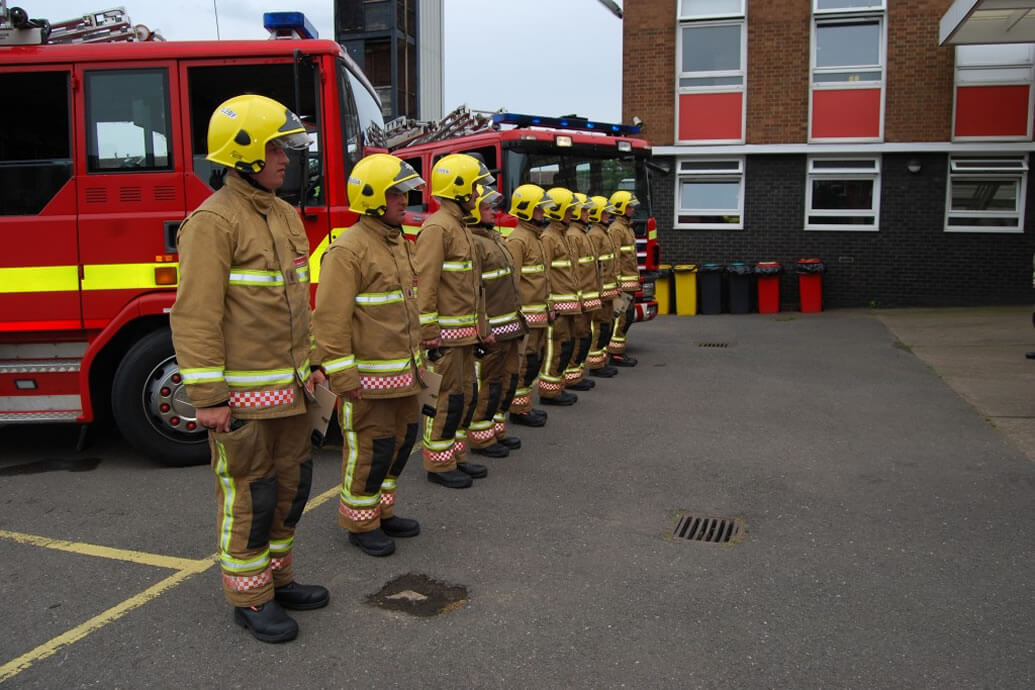 Retained Firefighters in the UK, also known as a Firefighter working the Retained Duty System (RDS), RDS Firefighter, part-time firefighter or on-call firefighter, in the United Kingdom and Ireland is a professional firefighter who may have full-time employment outside of the fire service but still responds to emergency calls within their local area when required.

Having been a retained fire fighter myself some years ago, it was with great pleasure that I was asked to write an article about the RDS (Retained Duty System) as they are today.

Within the UK, the majority of fire services/brigades are made up from RDS (retained duty system) firefighters due to having large rural areas where the population per mile2 is to low or the risks are not high enough to warrant a wholetime station. Larger metropolitan fire services/brigades such as London, Manchester and the West Midlands are just some that are predominantly covered by wholetime firefighters due to the high population and industrial risks.

Retained firefighters are better known as being retained than part-time, as the hours they cover in their retained roles are far more than those worked in a part time job. Some RDS members are on call for 120 hours a week as well as carrying out their day job.

The role of the retained fire fighter, has been, and still is, a key part of the fire and rescue service, in some counties they make up the majority of the fire service response.

RDS firefighters carry out the same operational roles as a wholetime fire fighter in many FRS’s (fire and rescue services), in some cases due to work loads and capacity it is not conducive for the RDS to be able to maintain certain skills, and these FRS will only train them to a certain level of response. With most things in the FRS, it will depend on the operational requirements and the ability for the crews to be able to maintain their skill sets in a specific subject, which allows them to work within the safe person concept.

Some RDS crews are trained to use specialist equipment such as heavy rescue, aerial appliances and also to become part of USAR (Urban Search and Rescue) teams, these are but some of the many roles RDS firefighters carry out on a daily basis.

Retained firefighters are recruited by passing various tests, on being successful they are then put on training courses, for example some will attend a 2 week core skills course (hose running, ladders and many other topics) followed by a 2 week breathing apparatus course (different fire services will have different training schedules and methods) they are then given a development pack which must be completed within a certain timeframe, this program is a structured training program that is carried out at the fire station where they are based over a period of 18 months+ entailing various practical and theoretical sessions. The development folder must be completed to become a proficient firefighter, which means they have demonstrated competency in all the different areas within the firefighter role map.

Retained firefighters attend a 2.5-hour training session once a week; again this may vary by service. During this period they will be given a brief on critical safety information, updates and carry out training sessions to maintain their operational skills and competencies. Yearly, 2 yearly or 3 yearly training courses are attended at their FRS (fire and rescue service) training center, these are required to maintain their operational license and keep up to date with any new operational developments and procedures. It also gives them the opportunity to carry out training with facilities that are not available on station.

The training courses delivered to the RDS crews are the same as wholetime firefighters and quite often there is a mix of both on a course, which in my eyes is a good thing as they both respond to the same level of incidents. It’s also a good time to exchange experiences and knowledge etc.

One issue is the increase in operational knowledge and extra skills placed on firefighters on a regular basis, this puts extra strain on our RDS crews as they only have a limited number of hours to train a week, not only having to maintain their current skills but also maintain and learn new skills. This demonstrates the growing pressure on RDS crews to maintain competencies with an already full training schedule.

With the current economy and the ongoing cuts the FRS faces, the RDS are being used more and more to fill the gaps, which is the direction most FRS are now having to look at taking. The pros and cons of this is something that is often open for debate.

An ongoing problem that fire services face is, will the local communities be able to support the demand of recruitment? By this we mean ‘will there be people interested within the community to take up such a role?’. Will there be people willing to take on such a demanding job both mentally and physically? It also hugely affects family life with the commitment required to maintain operational cover, the cover that is needed to make sure there are enough firefighters with the right skills to ensure a fire service has sufficient crew with the right skills to be able to respond to emergencies.

That said the RDS firefighters are a valuable asset to their local community forming strong relationships within the local community and as a close-knit team. The RDS bring a lot of additional skills to the role as a firefighter, as many have day jobs that have useful skills that can be crossed over and used at incidents, for example, a plumber plays a key part when attending a flooding incident in someone’s home, an electrician can offer additional advice when attending incidents involving consumer boards etc.

In summary the RDS section plays a very important role within the FRS and will always be needed, in the coming years their numbers will surely grow to make up the mainstay of most FRS’s across the UK.

By Jon Curley, RTC Rescue. As always I welcome your views rtc.rescue@gmail.com