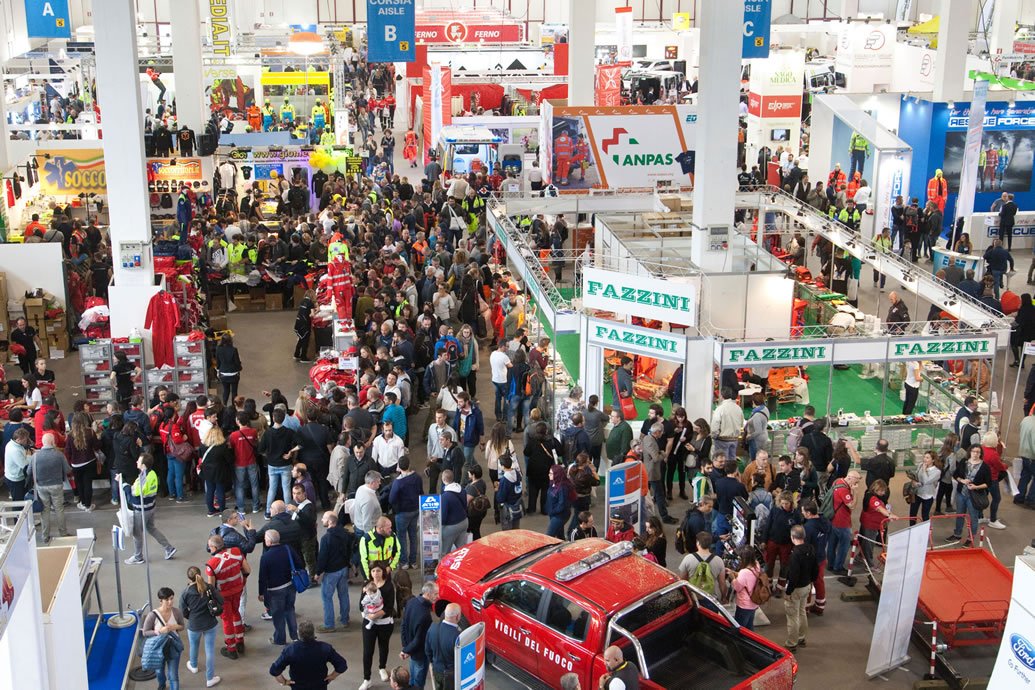 REAS powered by INTERSCHUTZ, which recently came to an end in Montichiari, Italy, received positive ratings from exhibitors and visitors alike. Over the three days of the show, some 23,000 industry experts and volunteers came to learn about current trends and the latest new products in emergency management. As of this year, REAS has officially been designated an “international trade fair”, and during its three-day run it confirmed its standing as an important event for the European market. REAS 2018 provided a detailed overview of the civil defense and rescue service sectors, while its coverage of fire prevention saw further growth this year.

“REAS has reaffirmed its position as the most important industry gathering south of the Alps for civil defense, rescue services, fire prevention and workplace safety”, says Andreas Züge, Managing Director of Hannover Fairs Italy, a subsidiary of Deutsche Messe, which stages the INTERSCHUTZ parent event in Germany. “REAS is known especially for its extensive coverage of safety issues. In addition, the cooperation between REAS and INTERSCHUTZ has helped us to raise our international profile.”

This is confirmed by Germano Giancarli, president of the exhibition company Centro Fiera: “In today’s exhibition industry, it is essential to be in dialogue with international partners. The partnership with INTERSCHUTZ, which started six years ago now, is all about two-way dialogue – and has proved very successful.” This year, for example, saw a further rise in the percentage of foreign buyers in attendance. However, REAS remains focused primarily on the Italian market. “The Italian system of emergency management, based on close collaboration between public authorities, associations and volunteer aid organizations, is highly regarded throughout the world”, says Giancarli. “REAS ensures that the emergency services make their voice heard every year, and it encourages dialogue between local authorities, central government bodies and associations.”

REAS also focused attention on international cooperation in emergency management and civil protection – such as that between Italy and Germany. “International cooperation is needed now more than ever”, says Dirk Aschenbrenner, president of the German Fire Prevention Association (vfdb). He led the visiting delegation from the vfdb, which is now a traditional feature of REAS. Accompanying them was the rescue dog Timmy, the much-loved official INTERSCHUTZ mascot. “The aim is to further improve the speed, efficiency and productivity of the fire and rescue services”, claims Aschenbrenner. “REAS offers excellent opportunities for sharing knowledge and experience. At the same time, it provides a foretaste of the flagship international trade fair INTERSCHUTZ 2020 in Hannover, which is sponsored by the vfdb.”

In addition to the displays by exhibiting firms and organizations, REAS 2018 also hosted a packed program of lectures and panel discussions, as well as seminars and workshops for visitors wishing to enhance their professional skills. One event that proved especially popular was the conference organized by ANCI, the National Association of Italian Local Authorities, on the theme “The new civil defense code – the reform of the third sector and the role of volunteers.” Looking at all the agencies involved in the coordination of emergency relief work, the conference addressed one of the key issues in civil defense. Also very well received was the conference organized by the region of Lombardy under the title “The local police between technological innovation and legislation,” in which one of the topics discussed was the trialing of body cams in video surveillance aimed at improving traffic safety in towns and cities. Another highlight was a roundtable discussion on the coordination of all institutional and operational elements in the prevention of forest fires.

The next REAS takes place from 4 to 6 October 2019 in Montichiari, while the next INTERSCHUTZ – the world’s leading trade fair for the fire and rescue services, civil protection, safety and security – runs from 15 to 20 June 2020 in Hannover.