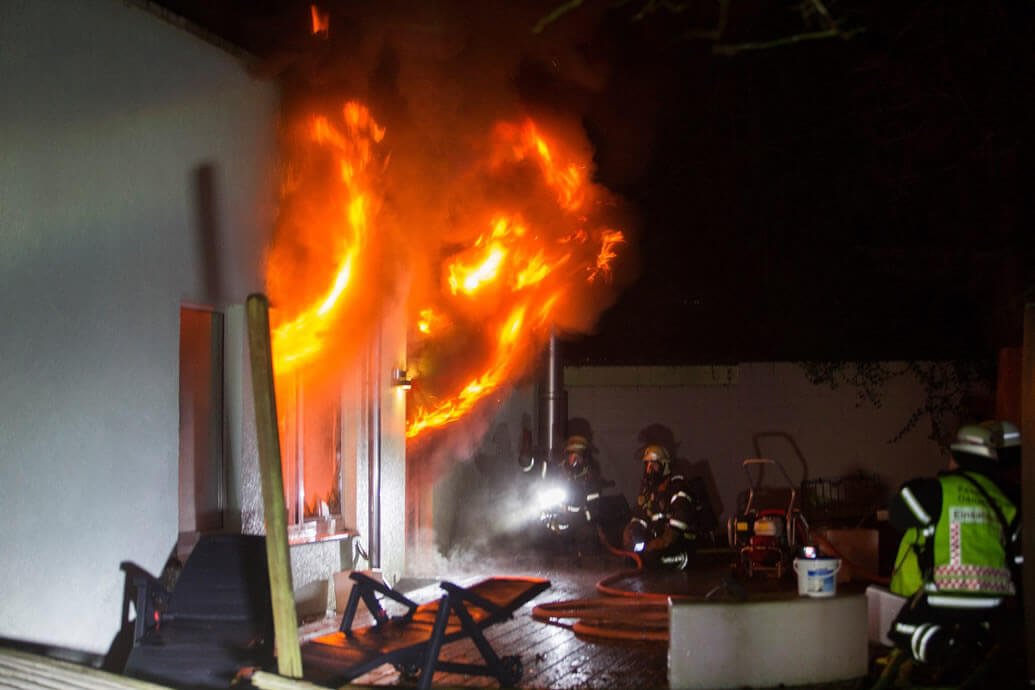 Real Firefighting Experience. There it was. The fire you’ve been waiting for a long time as a firefighter (if you’re young and daring); or as an Incident Commander the fire you’ve feared, for you know what can happen. I can reflect afterwards that it has gone well. Nobody was seriously injured and we saved the building. But a critical 20-minute period of this fire will not be forgotten so quickly.

This fire attack and how the fire was dealt with has a long history. It began with a training visit to Sweden in 1996, having experienced two serious fires in Berlin where I was based during officer training. Two firefighters were seriously injured at one of these fires. Then followed a resulting manuscript from me published in Germany (“Flashover-Game over”). It continued with a real fire training at the SouthTech Fire Academy in Florida; some fierce fires in Liberty City and Washington DC; devouring the books of Giselsson & Rosander, Grimwood, etc.

At the first time we met Paul still had hair and “FireNerd” Lars did not look like a Yeti . I’ve debated with famous German fire instructors like Cimolino, Ridder, Reick, Gerhards, Stöhr, Fuchs, and Feucht about firefighting. I’ve also been working with various colleagues from Dusseldorf, Kassel and Celle to develop their new flashover container training. Since 1999 hundreds of firefighters have been going through the Osnabrück container training fires and I also tried things with my guys in derelict abandoned buildings, which are best left unwritten! But my whole personal history not only helps, it weighs like a heavy load on your shoulders when you go to such an assignment: so many facts, opinions and experiences – but not a clear roadmap.

“Sauna fire in a fitness centre with people reported trapped”. The first thing that comes to mind: Damn, how often have colleagues at such sauna fires already been injured or killed. I’m feeling under pressure as the other officers and I divide and sectorise the command functions: As one is commanding the search and rescue operations, I take care of the fire. The primary fire attack route into the building has already been decided against by the first squad leader (attack from the unburned side…), he has found a shorter path through an alternative door. Inside, all doors are closed to prevent the spreading of smoke: there are many high-tech gym machines which still can be saved. 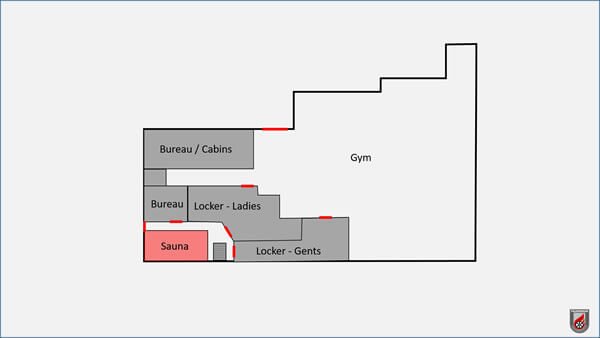 On a slippery terrace, next to the building, I meet the first two attacking crews and a squad leader (as seen in the picture above). Somebody has already set a ‘smoke stopper’ (I think: ‘Cool, someone has remembered the anti-ventilation tactics’) but I also noticed two windows next to it are broken (anti-ventilation is gone…). Nasty grey-brown smoke is flowing out of the building, the kind you can produce in the “can” by closing the door on a fully developed fire. ‘Oh oh’. The sauna (4x4m) is said to be on the right side – after 4m on the right side from a narrow hallway. Risk analysis (German version of B SAHF) presents us with a hazardous fire, we call it “mad fire”. In addition to this, all flammable gases developed are accumulating somewhere in the large building (previously used as a warehouse). It seems a ‘bomb’ is forming in front of our eyes! Occupant status is reported as ‘all clear’. Shall we even go in there at all “just to fight fire”? On a positive side, the 4m attack path looks like an acceptable approach. I also have the best guys on shift today: good squad leaders, great firefighters. They are ‘racing horses’. If we can knock down the fire from the outside (transitional attack), then we should be safe. Maybe it flashes, but if the guys have their bellies to the ground and do not enter more than 4m, we are fine. So the order went out: Attack! Go inside! 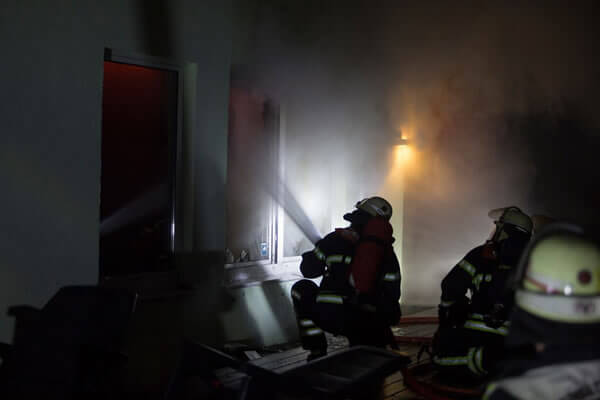 “HISS” Boom; window panes shatter and smoke is suddenly blowing into my face. When the smoke lifts after a few seconds, I see the guys laying on the ground. The Squad leader got caught, he leans against the wall of the house and coughs. I check everyone. OK? OK? Are you fine? And of course, all say they are doing well. Some want to fight, others do not admit that they are not really comfortable. OK. This fire wants to ‘dance’. Invitation accepted! Work hypothesis: Most of the flammable gases that were inside the building just burned off, it should be safe now. First, two fog nozzles from the outside. 2 x 400 L / min (200 GPM) should have a lasting effect (in Europe, that’s a lot if water for an attack line). Damage by water is a secondary concern, the alternative is a “public parking area instead of a fitness centre”. But we can’t start yet. At first we have to wait for a RIT, then we have a burst hose, then the tank water is gone before we have defrosted a hydrant and so on and so on. “Grrrrr”. The fire thanks us with a beautiful show of flames in a rollover. Looking good but tactically frustrating!

A few times smoke is ‘pulsing’ out of the windows (mini-backdrafts). ‘Aha’. There are still flammable gases. A squad leader wants to put a fan in position due to a misunderstanding. No, not at all. Nobody wants a gas whirl. When there is water again, the first team starts crawling inside (the same guys who were hit by first smoke explosion ….) on my order. Afterwards they told me that it was extremely hot, but bearable on the ground as they approached the sauna the nozzle operator was able to hit the fire for a few seconds – and then for the second time: HISS. BOOOM – BOOOOOOM. Everything is covered by a smoke screen – again a moment of shock. That’s it. Full scale retreat. Clear the building. Roll Call. Let it burn… We are preparing a large scale defensive attack. After a short discussion with the Chief the strategy is clear: Defensive; protecting exposures; staging; catering etc.

On the way back from the command car I noticed that hardly any smoke is leaking out of the building. Disbelievingly I see how only a few columns of steam issuing out of the building. What’s that? The last attack has probably broken the fire – we still have a chance. For the third time: Attack! And indeed: Now the next team can proceed almost undisturbed and completely blacken the fire. How cool is that? Unbelieving grin also on the faces of my colleagues: We actually did it, we are the coolest guys in the world. With a permanent grin, I distribute backslappings, ask if all are ok and look after whether we can improve the operations hygiene. Rehabilitation for the crews. Actually, I still can’t believe it. After the smoke cleared I have a look inside: collapsed walls, fallen down ceilings, bulging drywall walls – the consequences of the second smoke explosion. Ops. Serious doubts. Was the second attack really the right decision? Actually, the result is right (building saved, no one seriously injured) – but have you played out of wrong ambitions with the lives and health of the guys? Even now, where I sit here and think about yet again, I’m in doubt.

The lessons I learned, which I already knew, but again clearly confirmed: It makes a huge difference, whether you are in an almost empty container to fight an almost trivial fire load with some wicked painting / injection / impulse techniques or whether you want to extinguish a fierce fire with a potentially killing heat release in an unknown building. Industry, science and instructors provide us with a lot of very nice toys and tools: Injection nozzles, anti-ventilation, 3D-fire-fighting, CAFS, transitional attack, PPA, PPV and so. And I’m sure that for every tactical option there is an ideal fire scene. But you might not identify it during initial size-up, so sometimes you just have to keep it simple. In the post-incident analysis (which ist still going on)  we found some options I might have used but which didn’t come to my mind during that 20 minutes. 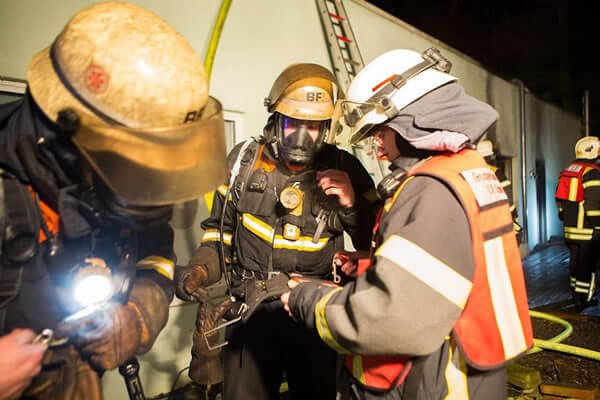 The true foundation of the fire service: The well-trained and motivated firefighter – Real Firefighting Experience.

I learned that one of the most essential difference are the people you work with. If they are not well-trained, if they do not trust you, if they do not have the attitude and if they are not almost as crazy as you are, then you can tear your ass off at such a fire and it will go down the drain. The silent nodding (combined with a slight grin), which I received this evening several times, is far more for me than just a “small victory”. It’s an honour and a privilege. It is the highest decoration a fire officer can get.

To support this article there is a video called The Difference