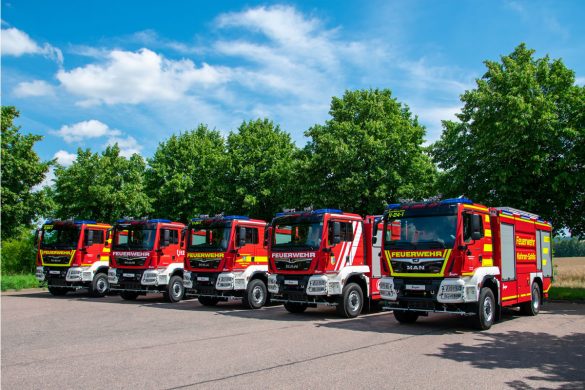 ZIEGLER hands over 5 TLF to the district of Leipzig Mühlau.

On August 4th, 2021, the excitement in the Saxon district of Leipzig was big –a total of five TLF 4000 were officially handed over to the fire departments of Groitzsch, Großbothen (City of Grimma), Lobstädt (Community Neukieritzsch)as well as Eschefeld and Kohren-Sahlis (both City of Frohburg).

The five structurally identical vehicles were built at the ZIEGLER plant in Zagreb, Croatia and completed and handed over by ZIEGLER Feuerwehrgerätetechnik in Mühlau.

From the outside, the vehicles, each with 5,500 liters of water and 500 liters of foam onboard, differ only in their design. This is only the same with the two vehicles of Frohburg, otherwise each municipality has chosen a different design of the lettering and color applications.

A technical description of the vehicles can be found on the following page.

ZIEGLER has also received another order for 7TLF 20/20to the City of Madrid.These vehicles will be delivered in mid-2022.A technical description of the vehicles can be found on the following page.