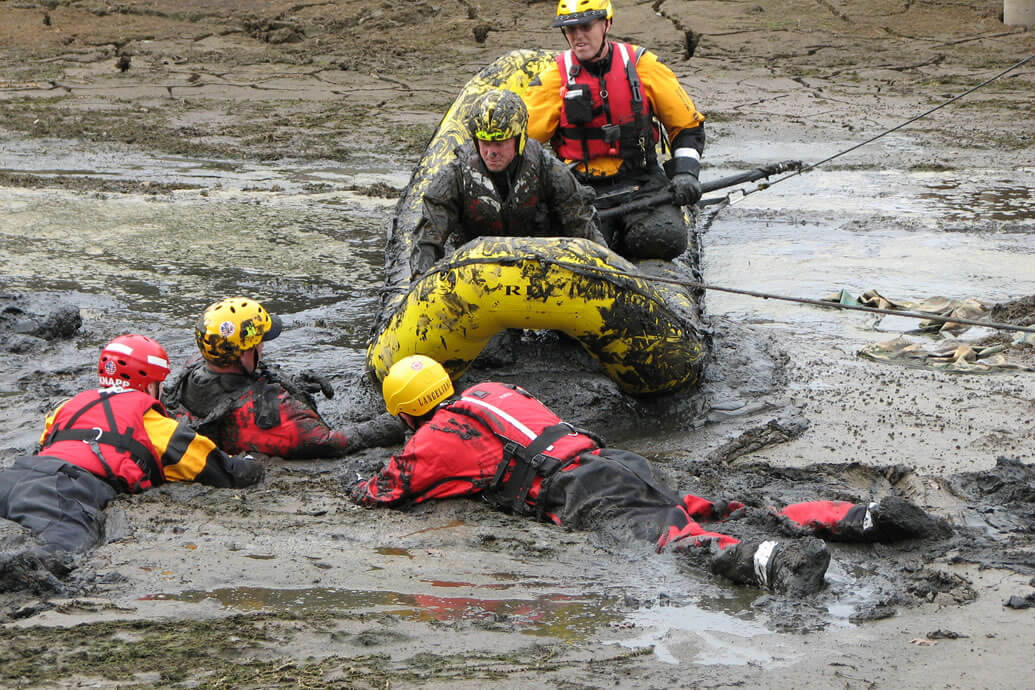 Mud Rescue involves the use of specialist equipment to recover people and animals from the mud or sinking sand that lies along coasts, river embankments, and lakes. A typical rescue involves using an inflatable raft to support the sinking casualty whilst the crew then use either water or air to soften the mud, allowing the casualty to be pulled to safety.

Incidents where people get stuck in deep mud are particularly hazardous. If not rescued quickly enough, a victim may sink further down, which can be hastened by panicking and moving. In addition trapped victims could be swept away by the water in areas of large tidal variation or by strong currents.

Teams of rescuers require special expertise that is different but related to water rescue, and a mud rescue kit is used to effectively lift and carry the victim from the mud. This typically consists of a mud rescue sled, mud rescue lance and ropes of varying lengths, typically 100m – 200m long.

The Mud Lance injects water or air to assist in the release of any suction effect created by the material that the victim may be trapped in.

It is recommended that compressed air be used for dry substances and estuary type mud, and river silt and water for heavier soils such as clay like substances. If the casualty is human a securing device such as an inflatable rescue path and life jacket should be attached prior to the injection of water or air.

As with every other form of rescue, prevention measures are the key to keeping people safe from becoming victims in the first place. This is why there have been recent safety campaigns such as in Lancashire, UK, where walkers and visitors to Morecombe Bay are at risk of becoming stuck in the vast mudflats. Lancashire Fire and Rescue Service in partnership with the RNLI have been running a summer safety campaign to warn residents and visitors about the dangers of the quicksand.

Another Fire Service with specialist mud rescue teams is Girdwood Fire & Rescue Department in Alaska, USA. Here is a typical rescue procedure used by this service and others to save a victim from muddy water and quicksand:

Mud rescue is a relatively recent specialism. However the technology to handle incidents has developed fast in order to reduce the risk of injury or even death. Rescue services also recognise their role in making the general public aware of the very real, but often overlooked dangers of muddy environments. This compliments their growing expertise to respond quickly when someone does become a victim.