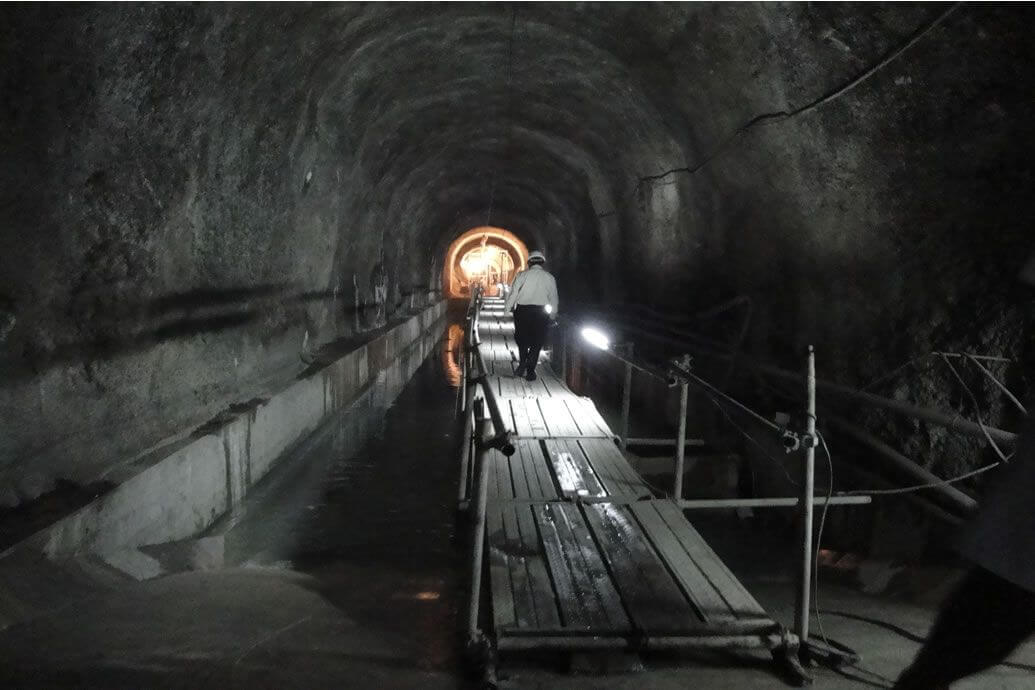 METRO Tunnel Fire Tests in Sweden were recently undertaken by the SP Technical Research Institute of Sweden, Department of Fire Technology which formed the subject of a recent two-day conference. Haukur Ingason and Anders Lönnermark report. 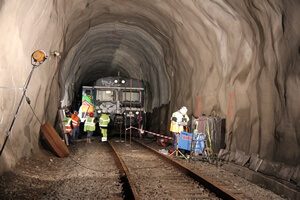 SP Fire Technology is responsible for the large scale tests, where the aim is to determine an appropriate design fire for metro/commuter trains. The commuter trains used were transported from Stockholm to Arvika, a distance of over 400km. On the way to Arvika, the three commuter trains, which comprised one motor wagon and two passenger wagons, made a halt at Västers, where they where equipped with the necessary measuring instruments, and the internal lining of one of the wagons was changed from combustible to non-combustible. This was done by installing aluminium profiles on walls and ceilings. The seats in the same wagon were also replaced with more modern ones. The aim was to see if there was any difference in the fire behaviour of the wagon types. Another parameter applied was the amount of luggage used in the tests. The amount, approximately 5.4 kg/m2, was the same as was found in a survey carried out on the Stockholm metro. 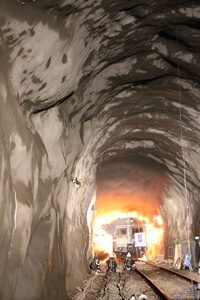 The work on design fires involves investigating which parameters will affect the spread and progress of a fire, and the nature of the conditions both inside and outside a burning carriage. The work includes comparing test results at various reduced scales with those of full scale tests carried out in a railway tunnel which is the culmination of the work.

With access to three commuter train carriages, the main purpose of the tests is to investigate how a fire develops, and what are the consequences of an explosion in a carriage. This work was carried out with two different types of interior standards: the normal interior standard of a commuter train carriage, and an interior which is more similar to that of an underground metro carriage in Stockholm. Mälardalen University was also involved in the work to determine the design fires and in carrying out the tests.

The full scale tests were performed in the old Brunsberg tunnel, located between Kil and Arvika in western Sweden. This abandoned, 276m tunnel lies on a siding about 1km long. It was taken out of service when a new tunnel was constructed close by to reduce the sharpness of a bend in the route. 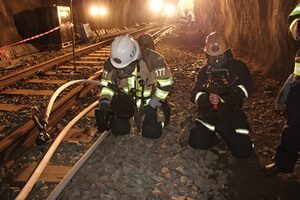 Performing fire tests such as these requires major resources, and so data acquisition was extremely comprehensive. Gas temperatures at numerous positions, heat release rates, gas concentrations and smoke inside the carriage and the tunnel, as well as radiant fluxes and gas velocities, were measured. The tests were also filmed from several different angles using both ordinary video and infra-red cameras.

Fire and rescue personnel from Greater Stockholm, Arvika and Höga Kusten-dalen areas were involved in order to investigate ways of tackling such fires. Also investigated were the behaviour and determination of thermal loads to which personnel are exposed during this sort of firefighting. The results will be of value in a number of areas, including:

– As input for fire design rating;

– Assessment of effects of fire exposure on people in the tunnel;

– Investigating methods of tackling such fires; 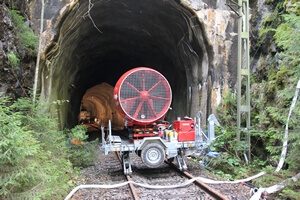 A two-day seminar was staged on September 13-14, 2011, in connection with the large-scale tests, and was attended by over 170 participants from 18 different countries. On the first day, participants were given the option of visiting the tunnel with buses laid on to transfer them from the conference centre to the tunnel. The group was divided into subsets and shuttled at different times to the tunnel to avoid congestion.

Having arrived at the test site, the different groups disembarked and boarded trolleys for the final leg of the journey as the buses could not get closer than 300m from the portal. Visitors were allowed to enter the tunnel and walk past the commuter train that was to be tested. This opportunity for a site visit was much-appreciated, as visitors were given the opportunity to smell, feel and touch the test object prior to the actual test and to get a feel for the confined space and relevance to the metro scenario.

Once back at the conference centre, they were able to watch a live broadcast of the tests on television screens in the auditorium. They could also listen-in to the live radio communications between the fire brigades and testing personal.

A few presentations about the project and other related subjects were given to the attendees while they waited the start of the tests. The following day, presentations were given about various fire safety aspects in metro systems, as well as about the test results. This offered a workshop style atmosphere for open discussion of tunnel fire safety together with the aim of the tests and the utility of the results developed. 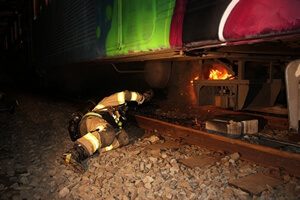 It is clear that this type of large scale testing is both very complicated and difficult to undertake. Due to the few tests that were possible, there was limited potential to vary the different parameters and conditions. However, what became clear was the importance of the choice of lining materials inside the carriage on the fire behaviour. Further, the importance of luggage and its contribution to the overall fire load was clearly demonstrated as its involvement in a fire can lead to a very rapid fire spread. On the other hand, high-performance lining materials can considerably delay the onset of flashover.

A phenomenon seen in tests carried out by SP in 2003 in the Runehamar tunnel was observed once again. The bulk of air in the tunnel started to pulsate, resulting in flames and smoke travelling backwards and forwards at a very precise frequency. The control of back-layering was shown to be very important. When the mobile ventilator used could no longer maintain the set speed due to the size of the fire, a rapid development of backlayering occurred. This surprised the fire fighters inside the tunnel. The heat release rate was most likely higher than obtained in other similar tests, but the final results of the analysis will be given at the ISTSS conference in New York, March 14-16, 2012. More information about ISTSS can be found at: www.istss.se. The Metro project has already produced much new information on fire development, evacuation and fire fighting. Watch this space for more information as it emerges. 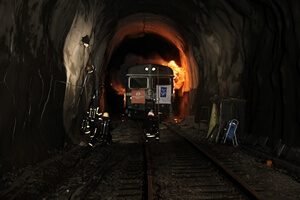 The Metro project (www.Metroproject.se) is a three year undertaking, running until the end of 2012, with Mälardalen University (www.mdh.se) in charge. Its objective is to conduct comprehensive research to improve the safety of travel, work and rescue in underground railways. The project is unique in Sweden given that it examines the fire performance of underground public transport.

Testing was performed in the old Brunsberg tunnel between Kil and Arvika in western Sweden. The abandoned tunnel is 276m long and is situated on a 1km-long siding.

The project is divided up into seven work packages; subjects under investigation include: design fires, evacuation, technical and organizational solutions, control of fire gases, extraordinary loads on structures, and rescue work.

The chief financer of the project is the Greater Stockholm Area Transportation Company (SL), which financed the majority of the full scale tests and also provided the commuter train carriages used. Other financers are the Swedish Civil Contingencies Agency (MSB), Swedish Fortifications Agency (FORTV), Swedish Fire Research Board and the Swedish Transport Administration. The total budget for the project amounts to over US$2 million (SEK14m).