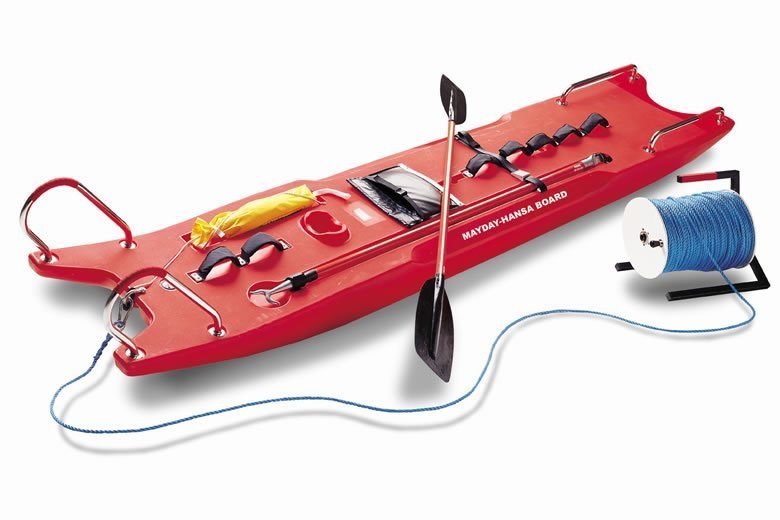 The Mayday-Hansa-Board is used by professional life rescuers and water rescue teams all over the world to rescue victims of water and ice rescue. It was developed from a surfing board by the company Mayday Scandinavian International AB in cooperation with Swedish professional life rescuers at the Fire and Rescue Department, the Life Rescue Society.

The Mayday-Hansa-Board has been in use by professional rescuers for the last 15 years all over the globe. In Sweden and the Scandinavian countries, the board is included in the official training programme for professional life rescuers in the life rescue schools. Almost every fire department in Scandinavia is equipped with a Mayday-Hans-Board. The first rescue vehicle out to a surface accident is equipped with a Mayday-Hansa-Board as standard.

Best described as a four-season surface rescue board it has been specially designed for faster and safer life rescue on water, mud and ice. Patented in 19 countries it has been used in many successful rescue operations of people and animals. It is import that the rescuer feels safe when operating in a rescue situation on ice and open water. The whole concept behind the Mayday-Hansa-Board is that the board provides the rescuer with nearly all the equipment he needs for water and ice rescue as well as being able to safely transport both victims and rescuers at the same time

The Hansa-Board is used by professional life rescue personnel and is recommended for emergency units, fire departments, emergency training schools and life-saving associations.

For more information and see how the MayDay Hansa Board is used in Ice Rescue Techniques.

To contact this supplier or receive more details please complete the request form below.