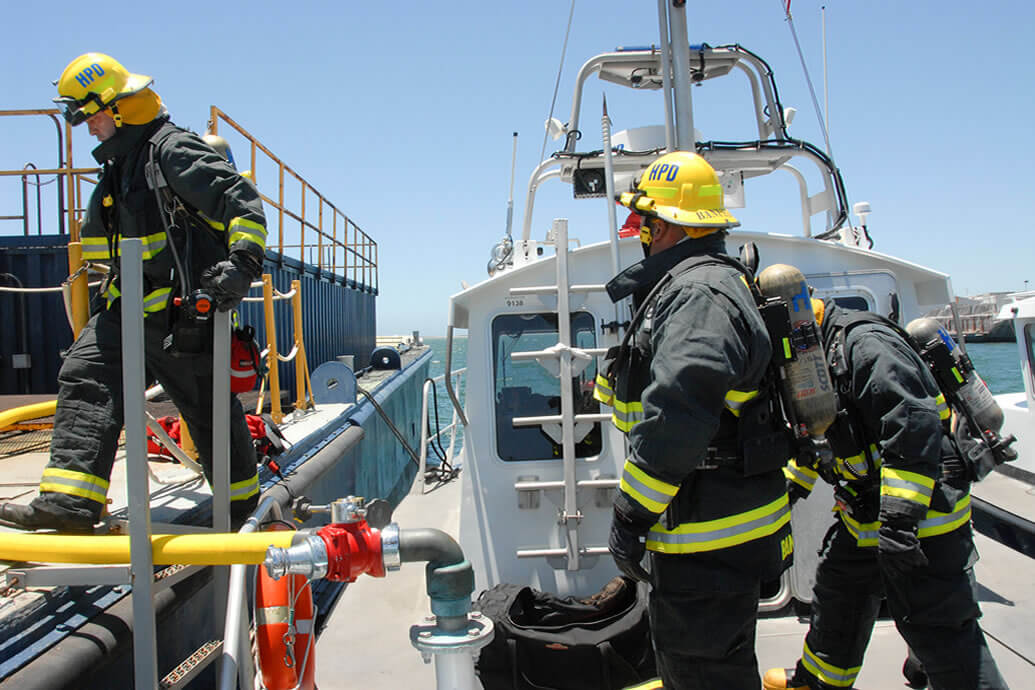 Marine firefighting is a general term used to describe activities to extinguish any types of fire, however caused, in a marine environment. For many years this meant dealing with fires on seagoing vessels, or more specifically, shipping. It was not until the 1930s that the first structures, other than ships, began to populate coastal and then deep water locations. In fact, the first structure to be erected on the sea bed out of sight of land was the Ship Shoal Block 32 well drilled for oil exploration in 1947 off the Louisiana coast in the Gulf of Mexico. Since that time, fixed and floating platforms of many types, and for a variety of uses, have been located in the world’s seas and oceans.

Current regulatory arrangements in the UK, and commonly in other areas of the world, reflect the changing face of marine hazards management. Marine firefighting has for almost a century been part of the wider issue of safety at sea which has resulted in the regulatory framework being conceived and developed by marine safety organisations. Those contributing to the regulations and safety standards which cover shipping are SOLAS (Safety of Lives at Sea) which issued its first fire safety regulations in 1974, IMO (International Maritime Organisation) and a variety of regional and national regulatory bodies. In Europe, the EU uses the MarED (Marine Equipment Directive), which encompasses a range of standards, to regulate marine firefighting activity, whilst in the USA this responsibility falls to the US Coast Guard (USCG). Elsewhere in the world, regulatory authorities include the Australian Maritime Safety Authority (AMSA), the China Classification Society and the Russian Maritime Register of Shipping.

However, in some countries, particularly in Europe, a split of responsibility exists between those organisations required to handle shipping and vessel related fires in rivers, docks and coastal waters above low water mark and the way such matters are handled in international waters. In the UK, the Maritime & Coastguard Agency (MCA) has a statutory duty for the initiation and coordination of civil maritime search and rescue. There is also an assumption that assistance will also be provided in coastal waters when possible. To this end the Maritime Incident Response Group (MIRG) was formed in 2006 which consists of 15 strategically located shore based fire & rescue services.

Out at sea, all aspects relating to safety on marine structures is the responsibility, in the UK, of the Health & Safety Executive. The relevant statutory provisions governing firefighting on UKCS offshore installations are the Offshore Installations (Prevention of Fire and Explosion, and Emergency Response) Regulations 1995, SI 1995 743, better known as the PFEER Regulations, together with the Approved Code of Practice and Guidance – ISBN 0 7176 1386 0.

The Regulatory authorities with responsibility for these matters in Australia and USA are NOPSA (National Offshore Petroleum Safety Agency) and BOEMRE (Bureau of Offshore Energy Management, Regulation and Enforcement), respectively.

At one time, marine fire risks were primarily associated with shipping and the vessels or their cargoes. The principal causes of fires at sea on vessels are accidents, collisions, mechanical failure in engines and cargoes catching fire. On passenger vessels, fires are the result of collisions, on-board accidents and mechanical failure. In the 21st century, the seas and oceans are increasingly becoming sites for static structures. Many of these are associated with oil, gas and other mineral exploration and harvesting in which mechanical processes, working in volatile environments, are required to bring gaseous or liquid hydrocarbons from beneath the sea bed to production platforms and then onto ships or into pipelines to bring them ashore for processing. Other structures, both fixed and floating, are also being erected at, or towed to, locations in many coastal waters around the world. These include offshore wind farms, tidal and wave power renewable energy installations, scientific research and monitoring stations as well as military and defence installations.

Clearly the range of fire hazards associated with these different activities varies widely and will depend considerably on the risks of accidents, combustibility of the materials used in structures, the types of cargoes carried in ships and the flammability of minerals being extracted on petrochemical production platforms in these marine environments. In some situations, firefighters will be able to work onboard, depending on the severity of the fire, but, following a blow out or explosion aboard an oil rig or gas production platform, fighting the ensuing fire may only be possible from firefighting vessels.

Also, the characteristics of the fires facing firefighters will reflect the volatility and flammability of the materials involved in the conflagration. Some materials burn much hotter than others. Some will throw off burning shards or molten materials, some can be unpredictable either due to the composition of the flammable materials involved (in particular hydrocarbons and chemicals) or prevailing weather conditions. Wind speed and direction can be particularly variable out at sea and can cause rapid changes in the levels of hazard experienced by firefighters.

Personal protection to suit the conditions

As with land-based firefighting, the type of protection required is increasingly being designed to protect against the specific nature of the hazards most commonly encountered.

New marine firefighting standards introduced for use throughout Europe equate the hazards, if not the conditions, associated with typical shipping fires with those commonly experienced in structural fires. This has led to the new MarED standards, enshrined in EU Commission Directive 2010/68/EU, to adopt EN 469 (2005) as its benchmark for basic protective clothing for firefighting (A.1/3.3). This means that, throughout the EU, local fire & rescue authorities can deal with ship-board fires occurring in rivers, docks and coastal waters wearing their regular structural fire kit.

For parts of the world outside the EU, a new international standard has recently been developed and was published in June this year. The new standard, BS ISO 22488:2011 [Ships and marine technology – shipboard firefighters’ outfits (protective clothing, gloves, boots and helmet)], has drawn substantially on the work undertaken for the recently issued European Standard.

Close proximity firefighting involving gas and oil fires, whether on production platforms or aboard ships, require protection from the intense heat and flames produced in such ‘hot fires’ and call for quite different types of protective garments. In the past, these have been typically manufactured using an aluminised fabric for the outershell which has the capacity to protect against intense flame lick and a reflective property to reduce the impact of radiant heat on the wearer. In some circumstances this type of firefighting will require PPE satisfying ISO 15538 (2001) – Protective clothing with a reflective outer surface (A.1/3.3).

Marine firefighting garments have traditionally been designed to incorporate a yellow outerlayer to signify its use by emergency incident crews on board ships as well as other types of fires at sea. Frequently known as ‘fleet suits’, these garments are now made to provide the same protection as those used for structural firefighting on land. This means that garments meeting EN 469 (2005), as used by European municipal firefighters, can also be deployed by them when dealing with shipping fires on river estuaries, in ports and docks and in coastal waters.

For fighting fires involving shipping at sea, and for other marine fire emergencies, an alternative is the new design fleet suits which are being introduced to the market to coincide with the implementation of the new EU Commission Directive in December 2011. An example is the new Bristol Fleet Suit, an internationally recognised design with Wheelmark certification. This is available in 2 options meeting either EN 469 (2005) Level 1 or Level 2.

As with all PPE, compatibility is important and appropriately matched helmet, boots and gloves should be supplied. In Europe these should be to MarED approved standards, and include helmet to EN 443, gloves to EN 659 and boots to EN 15090 whilst the new international standard, BS ISO 22488:2011, when introduced, may be adopted in other parts of the world.