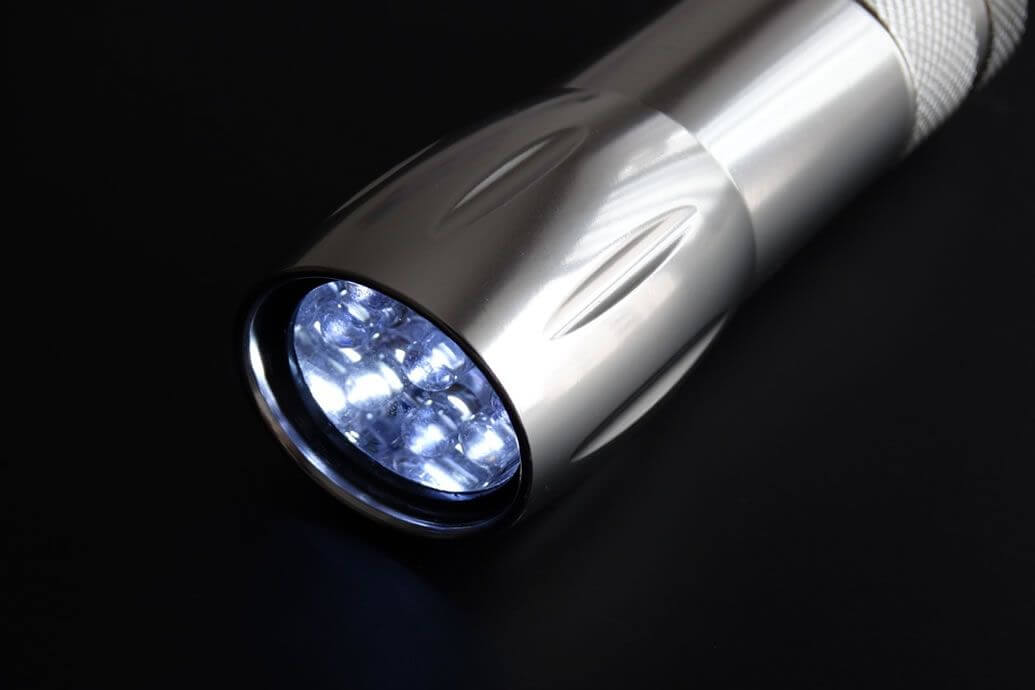 Fire Services in the UK have had to comply with the DSEAR (Dangerous Substances and Explosive Atmospheres Regulations). We look at the affect of this ATEX legislation on the portable scene lighting equipment used by fire fighters.

LED or Light Emitting Diode technology is the next generation light source for lighting in general, and for portable safety torches in particular. The white LED was developed in 1996; from very limited initial application, LEDs have seen greater and greater use in portable lighting over the last 10 years.

White LEDs were originally restricted to low power devices such as the widely used five mm package. It was not until the development of the high-power 1-watt LED, six years ago, that a serious contender to the filament lamp emerged. 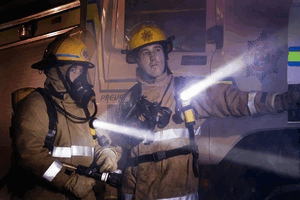 Fitted for Life and Zero Maintenance

Incandescent lamps use a comparatively fragile tungsten filament light source, susceptible to fracture if subjected to impact from knocks or drops. LED technology offers far higher reliability from an inherently more robust construction with greater resistance to rough use. Furthermore, the 20-30 hour typical filament life of an incandescent torch bulb is insignificant when compared to the 25,000 plus hour life of an LED. LED light sources are ‘fitted for life’ and will more than last the life of a torch, requiring zero maintenance.

LEDs have always been marketed as offering greater efficiency than incandescent filament sources, more lumens per watt. Until recently this has been a difficult comparison to make because of significant differences in achievable light output levels. With the advent of the high power LED, the true comparison can be made. 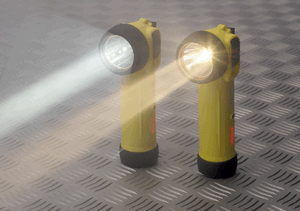 Currently the difference in efficiency between halogen incandescent torch bulbs and LEDs can be double (typically 12 lm/watt on low voltage halogen lamps compared with 24lm/watt on high power LEDs), with the promise from LED manufacturers that efficiencies can and will increase in the near future.

In addition to the benefits already outlined, LEDs offer real advantages for portable hazardous area equipment. They are a ‘cool’ solidstate technology; they do not present the hazards of hot filaments in incandescent lamps, but lend themselves to higher levels of protection with the opportunity of use in Zone 0 equipment.

LEDS give an excellent, controlled light, considerably whiter with a higher colour temperature than halogen lamps. However, with high power LEDs still in their infancy, there has been a lack of experience and knowledge in applying optics. “Off the shelf” solutions are available, generally developed for commercial lighting installations, but often not suited to torches. Portable lighting manufacturers are starting to develop products with bespoke LED optics, some offering very impressive solutions. 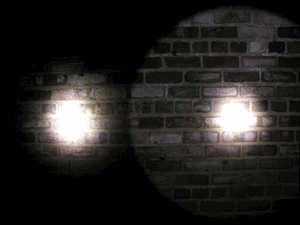 These can all give problems, but the latter can create real hazards in a critical situation where surrounding obstructions or obstacles are not visible. Users have reported with such products that when pointing the beam straight ahead, nothing can be seen on the ground, above, or to the sides, “which is like walking with blinkers on”.

Traditionally the light output from torches has been measured in “candlepower”. This can give an indication of light intensity, but does not give the full picture, with no suggestion of how effective the beam is. A fuller picture is given when looking at the power of the light source in watts (generally the more watts the brighter, although different types of source can be more or less efficient). The lumens output from the light source will convey the amount of light generated by the bulb or LED, and finally the lux value for the torch or lamp will identify light intensity at a particular distance, typically five metres.

Ultimately the recommendation is to take a number of different torches into a dark or smoke filled area and compare the light. This is the only way to get a true feel for how effective the beam spread and intensity is, in the actual conditions. 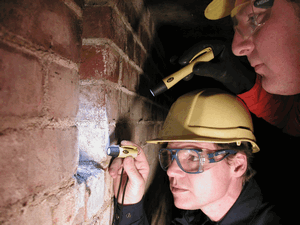 Safety torches have traditionally used low power zinc cells; now with newer methods of assessment and changes in safety standards, ATEX torches using high power alkaline cells are becoming the norm. Alkaline cells typically have three to four times the capacity of zinc cells, giving the benefit of a higher power light output for a longer duration. Users must beware though; safety torches now have restrictions, allowing only specified brands and types of cells to be used.

Consideration should be given to the number and size of primary cells required by a particular torch, and how long the cells will power the light source, as this will affect product “life-time cost”. Small sized primary cells can be less expensive than larger cells, but will have considerably less capacity; generally D sized cells offer the best value with the lowest price per “watt hour”.

Additional features are now becoming available with primary cell safety torches, such as spare bulbs and low battery warning indicators. Such features can attract a price premium; however users should not forget the benefits. In addition to the added user safety from the low battery indicator, particularly in confined spaces where the risk of being ‘left in the dark’ is reduced, users are reporting environmental and financial benefits over previous practice, now cells are replaced only when they need to be.

In the past, rechargeable Ex equipment has been regarded as unreliable, users reporting bad experiences with devices such as rechargeable torches, radios and gas detectors. Reliability problems appear to have centred on nickel cadmium (NiCd) and nickel metal hydride (NiMH) battery chemistries, and have related to ‘battery memory’ and loss of capacity. Battery suppliers claim the problems relate more to control and use of the rechargeable batteries, rather than the batteries themselves. 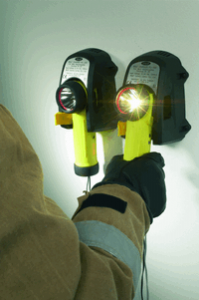 Rechargeable battery technology has made many advances in recent years. As a result of consumer demands for an ever-increasing array of electronic devices to be made available with greater reliability, and without the inconvenience and expense of primary cells, rechargeable batteries and the associated charge and discharge control technology has improved immeasurably.

Lithium Ion (Li-Ion) rechargeable battery chemistry has emerged over recent years as the battery technology of choice for high-end electronic equipment from cell phones to laptop computers. The key advantages of Li-Ion cells are a very high power density with a low weight, high cell voltage, environmentally friendly, low selfdischarge, no memory effect and a fast charge rate. The advances in rechargeable battery control technology and the use of Li-Ion cells are starting to be applied to rechargeable ATEX torches.

The selection of one battery system over another comes down to a number of factors:

Other Factors to Consider

Some emergency service organisations now look at a “spend to save” policy, believing that spending more on better specification, better performance and lower maintenance equipment will give long term cost savings.

Torch technology has changed dramatically in recent years, making it important that the Service keep up-to-date with developments. It is critical that equipment is selected, used and maintained correctly to give safe and reliable operation.