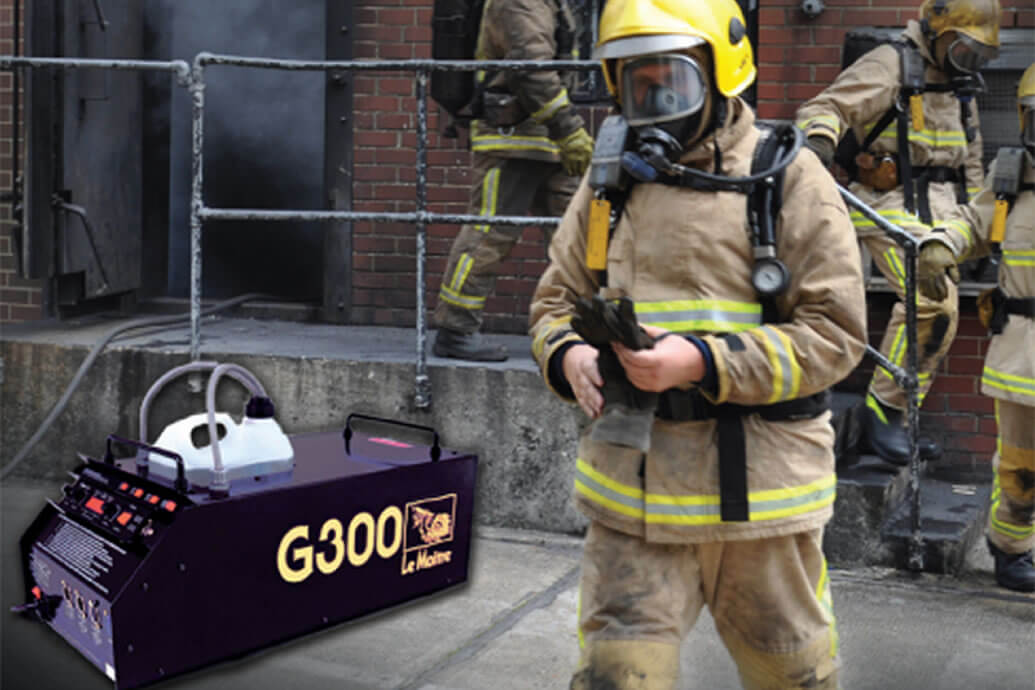 Le Maitre G300 celebrates 20 years: Le Maitre is celebrating the 20th anniversary of its renowned G300 Smoke Machine – an industry standard around the globe which has been widely adopted by theme parks, theatres, cruise ships and the emergency services for breathing apparatus training.

The G300 was Le Maitre’s second generation high powered smoke machine, following on from the Smoke Processor 3 series, and at the time of its launch was commented on by competitors as setting the standard by which all other machines would be judged. Le Maitre’s goal at the time was quite simply to make a machine that was better than anything else on the market. This has clearly proved to be the case with sales still going strong and many of the unique features still not being able to be emulated by other manufacturers.

Le Maitre came up with and patented its “Layered Block System” called Genesis – hence the ‘G’ of G300. The system is used in all Le Maitre’s professional smoke machines to this day.

The G300 was in fact to exhibit many firsts including; the first digital smoke machine on the market; a sensor to detect when the fluid level was low; microprocessor control.

Another key development criterion was to create a powerful machine, yet one that could also operate continuously without having to turn off and re-heat. Another first and a very much sought after feature.

During its development, haze was also becoming a big issue in the industry. Le Maitre took the ingenious and unique step of deciding to include a haze option in the G300. No other machine since has been able to achieve this combined functionality.

Efficiency and cost of ownership were further considerations in the engineering of the new machine. A short heating pipe of just 1m allowed the G300 to be powered by much smaller wattage heaters than competitive models, but still give immense power. Competitors have not been able to emulate this and instead use cast block systems with 5m of tubing inside. Furthermore, while a G300 heater block can be dismantled and serviced or replaced, a cast block cannot, becoming scrap once it reaches the end of its life. Even if the heater still functions it cannot be removed from the cast block and has to be thrown away as well.

As if all these features of this unique smoke haze and machine weren’t enough, the G300 became even more versatile when Le Maitre introduced its Freezefog Pro. Combining the two units with liquid CO2 created a complete new low smoke generator system capable of producing spectacular volumes of a low fog effect.

The G300 was an immediate success, and sales continue worldwide at high levels today. The theme park industry has been a major adopter of the G300. Disney Theme parks have used it not only as a smoke machine/hazer, but have also had it adapted to give a realistic steam effect. It was also used for the ET and King Kong rides at Universal.

Fire and Rescue agencies were amongst the first to purchase the G300, specifying it as their preferred machine for training. Four G300’s were used in the Channel Tunnel to check the ventilation system, before it was opened to the public in 1994. It continues to be widely used in training and emergency simulation exercises such as the recent Exercise Deep Reach in the Glasgow subway, run as part of Scotland’s training for large scale emergencies at events such as the forthcoming Commonwealth Games and the Ryder Cup.

The G300 is N.A.T.O codified and used by the Armed Forces for training and also sold to the United States Navy.

It has of course also been embraced by another group of Le Maitre key customers, – theatres, touring companies and cruise ships, for whom the ruggedness, versatility and high output has won them over, along with the high quality smoke fluids, approved by Equity.

Combined with Le Maitre’s range of water-based smoke fluids, the G300 gives the safest smoke. The higher the pressure internally in the heat exchanger, the higher temperatures the fluid is heated to. This can lead to molecular charring causing free radicals to be formed. This in turn can lead to all sorts of unpleasant molecules being formed. Whereas with a low pressure system such as that used in the G300, the temperature is much easier to control and the G300 is able to produce smoke that had not been burned at high temperatures – which is often the smell that one associates with the high pressure type machine.

The brains behind the design and development of the G300, Dave Roffey, can be extremely proud of his creation. Dave is still working in R&D at Le Maitre today, and continuing to make ground breaking machines for the company.

“Within Scottish Fire and Rescue we are continually reviewing our operational equipment to ensure personnel have the best available. The fact that we have used the G300 smoke machine since its introduction speaks volumes. From single appliance stations to our state of the art training centre the G300 is not only the only smoke machine we use but the only one we need. As the training officer for Glasgow I need a smoke machine that is reliable, adaptable and easy to use and this is the G300.” George Baggley, Glasgow Training Officer, Scottish Fire and Rescue

“We have been using G300’s ever since I’ve been working in the industry which is for at least a decade and it’s part of our furniture. We have found them super reliable and always our go to smoke machine. We’ve never looked at replacing them as they are perfect for purpose and cover all our smoke effect needs.” Marcello Vigo, Technical Manager, Butlins

“We have had used many G300/Freezefog Pro systems to make heavy fog. Six units were used for Eurovision Malmö 2014. They covered the huge stage in just 10 seconds and despite strong air currents, the smoke stayed hanging low to the ground. I can’t recommend these machines enough – they work just GREAT!” Markku Aalto, Owner, Oy Pyroman Finland Ltd