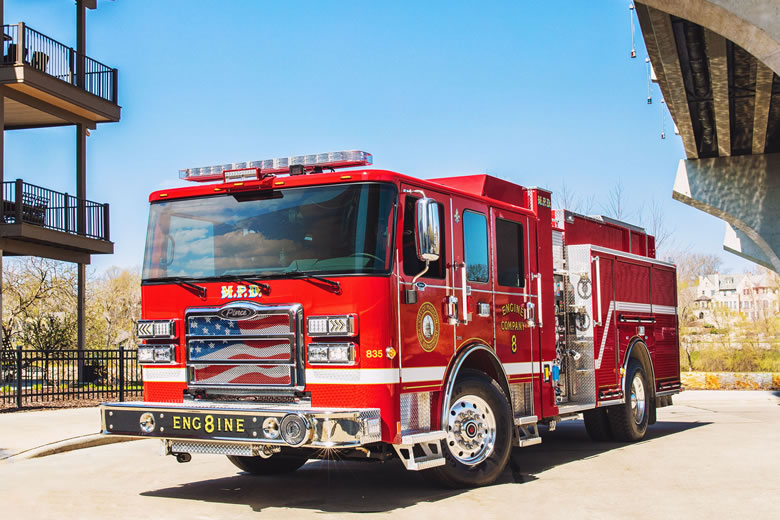 Around 20% of all CO2 emissions originate from internal combustion engines, causing a significant impact on global warming.  Most countries globally are committed to reducing the amount of carbon dioxide they emit in order to reduce global warming.  Electric and hybrid vehicles are one means of doing that.

In 2021 the electric vehicle industry celebrated the 20th anniversary of the introduction of the first mass-market hybrid vehicles and the 10th anniversary of practical electrical cars.  Sales of electric cars jumped by 160% in 2021 to 10 million vehicles worldwide.

By 2025 20% of all new cars sold worldwide will be electric, according to a report by the investment bank UBS. That will jump to 40% by 2030, and by 2040 almost every new car sold around the world will be electric, says UBS.

So what about emergency vehicles?  It’s one thing to be able to power a small, light car by battery, but what about a 20 ton plus fire engine?  Has battery capacity developed sufficiently to power a firefighting vehicle electrically?

The answer is yes, several manufacturers have recently released either hybrid or fully electric fire engines.  This has come about by a reduction in battery costs of 50% in the last 5 years, making the size of battery require to power a fire engine a feasible cost.  Battery life has also extended dramatically, increasing the number of miles achieved on a single charge.

With plans to ban the sale of combustion engines by 2030, the UK government is forcing a change in vehicle manufacture and usage, and this will include firefighting vehicles.

Electric and Hybrid Fire Engines now on the Market

This means that the Z6 HYBRIDdrive is usually powered purely electrically at airports. Depending on the driving profile, a corresponding range even allows over 80% of the journeys to be made electrically. When it comes to an operation where every single second count, the Z6 HYBRIDdrive really comes to its own. The electric motor and combustion engine accelerate the 39 ton vehicle, to its top speed without competition. Here, the values are on a par with an 8×8 chassis with diesel drive.

The Z-Class has a great water tank capacity of 12,500l with a foam tank of 1,500l.  Special features include Z-control of the latest generation, Z-vision, a light mast with 8 LED spotlights and rapid intervention hose reels.

For the RT, the developers at Rosenbauer didn’t just improve what they already had, but instead reconsidered the entire fire engine concept. The objective was to conceive the future of firefighting vehicles.  The RT is a hybrid vehicle that will run fully electric throughout most cities but then also has a combustion engine for further afield.  The Los Angeles fire department has recently taken delivery of its first electric RT.

In terms of firefighting equipment, each RT model can be individually tailored to suit the operational scope: The volumes of the water tanks range from 1,000 l to 4,000 l, those of the foam tanks from 50 l to 400 l. Both normal and combined normal/high pressure pumps are available. All available pumps can be operated either purely by the battery-powered electric motor or, especially in the case of longer operations, using the diesel-powered range extender.

The Vector is a fully electric fire engine that allows operators to drive and pump on solely battery power.  It delivers unrivalled performance, range and efficiency.  High-capacity batteries provide 327 kWh of total storage, the biggest of all the electric fire engines, with 800 volt DC.  Battery Thermal Management System (BTMS) keeps the EV batteries at optimal temperature for best performance.  The water tank holds 2,000l, with the foam tank holding 2,950l.

The Vector has the option of a range extender combustion engine to allow for further reach.  This is compact with low emissions and automatically charges the batteries as it runs.  However it is not necessary for normal urban operations.  It also has a customisable cab, body and pump house to suit requirements.

The Volterra is a hybrid fire engine that contains an internal combustion engine to extend range and pumping power.  An Oshkosh patented parallel-electric drivetrain featuring an EMIVT allows zero-emissions operation when powered by the integrated onboard batteries.

Pumping can be solely powered by the battery for shorter operations, or automatically switches to the combustion engine for longer periods of pumping.  Therefore loss of battery power does not inhibit pumping.

The EVO is the first fully electric fire engine to be developed in Europe, by Scottish firm Emergency One.  The engine has a 220 mile range making it practical for all purposes.  It can store 1,750 litres of water and 1000 litres of foam.

The Scottish Fire and Rescue Service has commissioned an EVO as a test vehicle, due to be delivered in early 2023.  The region of Herault in France has also ordered several.

The E1 EV0 can be built to Britain’s BN EN1846 Pumping Appliance regulations, although the firm says it can also be adapted to different location regulations.

Emergency One director Michael Madsen said: “The EV0 exceeds the standard’s requirements for driving range and pumping performance at zero emissions, whilst the optional onboard smart charger provides resilience at protracted incidents.

“The EV0 as specified for SFRS carries the same inventory as a traditional pumping appliance, is one of the first of its kind in the UK, and the first to feature an innovative all-electric rear drive axle installation.”

So it is clear that battery capacity has progressed significantly enough to power large fire engines, both to drive them and pump.  As the technology improves even further we will undoubtedly see more such vehicles being developed and used.  This can only be good news for the environment and contribute towards lowering emissions.

Is Electric the Future for Firefighting Vehicles? is written by Caroline Grey Contributing Editor at Marcus Media.