IR Technology Use in Rescue Services 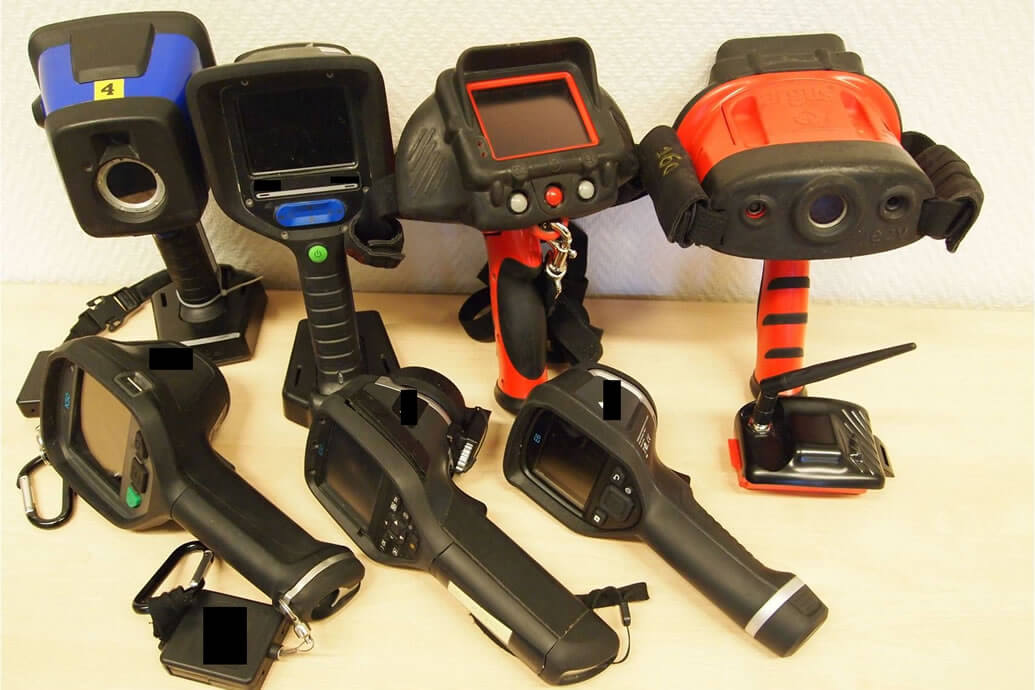 How a thermal imaging camera works

All objects that are warmer than absolute zero (c. -273°C) give off energy in the form of electromagnetic radiation. This radiation is categorised based on its wavelength, and all wavelengths immediately above visible light can be categorised as radiant thermal energy or infrared radiation. Thermal imaging cameras contain a sensor that detects infrared radiation and converts it into electric signals, which are displayed on an LCD screen as an image. Thus, it is possible to see infrared radiation, which is ordinarily invisible to the human eye. The image becomes clearer as the difference in infrared radiation between objects increases. Thus, two objects that are the same temperature can appear to be different temperature when viewed using a thermal imaging camera. This is often due to the fact that different materials vary in how they emit infrared radiation. This property is termed ‘emissivity’, and a higher reflectivity results in a lower emissivity. A simplified rule of thumb is that shiny materials generally look colder than they really are. Variations in temperature are thus more obvious in one object that is made of a single material than a collection of objects that are made of different materials.

Performance of IR Technology Use in Rescue Services

The performance of a thermal imaging camera depends on the number of pixels and resolution of the IR sensor, the firmware of the camera, and the resolution and size of the display. Some cameras take both IR and digital images and merge these to produce an image with more detail. A fire environment is often rich in contrast, meaning that it can be difficult to catch more subtle, low-contrast details. High Dynamic Range (HDR) is an imaging technique that is used to achieve a better image clarity by incorporating a broader range of exposures in the image, resulting in a greater level of detail. Thermal imaging cameras can also experience issues with image noise and the imaging surface heating, causing over-sensitivity and image lag.

From cameras for smoke divers…

When thermal imaging cameras initially became popular with rescue services, they were designed to be used indoors during fires in buildings, and primarily to assist smoke divers in orientation and searching for people in smoke-filled buildings. These handheld thermal imaging cameras were also designed to assist smoke divers in assessing the likelihood of accumulated fire gases igniting.

Thanks to IR technology, the temperature and movement of fire gases can be monitored, meaning that firefighters are better able to prevent the ignition of fire gases by cooling them. IR technology facilitates the interpretation of ongoing changes in a fire inside a building, and may provide insights that can inform strategy and choice of methods. As an operation unfolds, the effects of the chosen extinguishing methods can be studied in real-time, and strategic choices can be made based on the images produced by the camera.

…to the scanning of buildings

A smoke-diver operation that focused on conducting extinguishing in the room in which the fire started was once the favoured strategy of rescue services. However, the working environment that the firefighters encountered in doing so featured high temperatures, poor visibility, and poisonous smoke. Among other things, the requirements of safety and working environment regulations have meant a gradual change in terms of operational priorities, meaning that the focus has turned to extinguishing from the outside. It is also increasingly common that smaller vehicles are used when personnel factors do not allow smoke-diver operations to be carried out. In such scenarios, the extinguishing strategy is to slow the spread and growth of the fire until either the fire has been extinguished or reinforcements have arrived. Positive pressure ventilation fans and new types of extinguishing system improve the ability of firefighters to initiate an operation from the outside of the building. IR technology comes into its own in this context, as it facilitates the finding of the source of the fire, determining of the spread of the fire within the building, and analysis of the results of extinguishing efforts in real-time.

Additional application areas of IR Technology Use in Rescue Services

IR technology can also be used to:

A thermal imaging camera can be invaluable during an operation but there are many parameters that may impact an outcome, and both theoretical knowledge and practise are required in order to correctly interpret any given situation.

When IR equipment is to be purchased, it is important that the specific needs of the rescue service in question be determined, and possible contribution of the equipment analysed. IR equipment may provide support for a range of different types of task, and the selection of cameras needs to be made based on the specific purposes to which they may be put. Below, several questions for a rescue service to consider when selecting IR equipment are listed:

The technology summary has been produced using the SPAR programme, which also conducts objective evaluations of products for rescue services. The information from the evaluations is intended to provide rescue services with support when making decisions relating to purchasing new technological equipment.