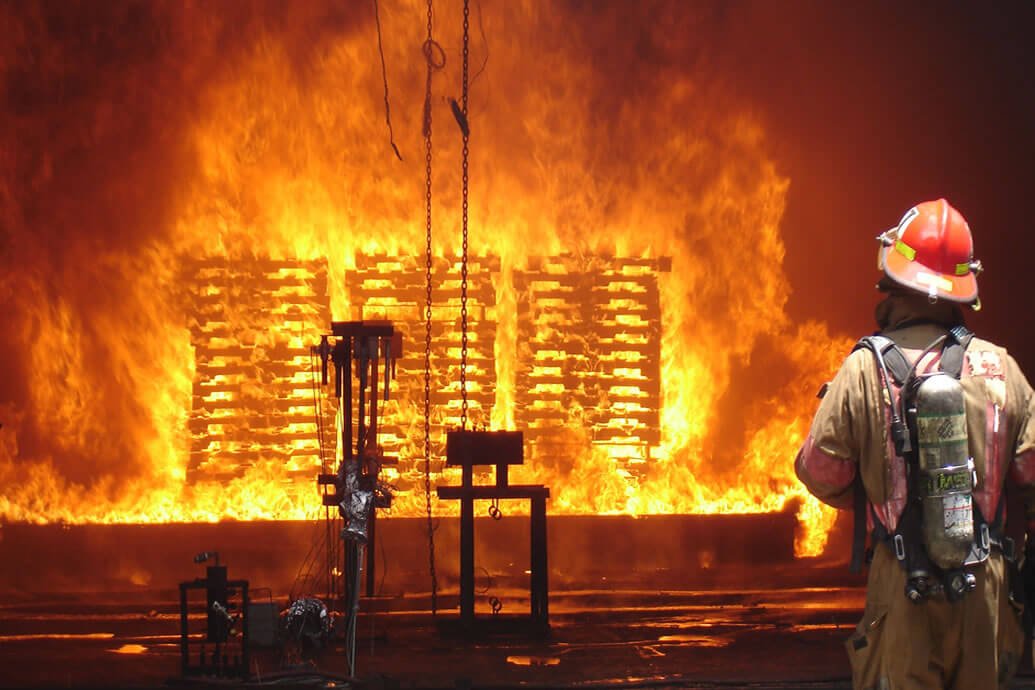 SP Technology burns 20 m of ethanol in the ETANKFIRE project

ETANKFIRE is investigating how ethanol and petrol mixtures burn, and is developing suitable methods for extinguishing tank fires. An important stage of the work was achieved in August 2012, when SP Fire Technology carried out two fire tests. Performed on a very large scale, these experiments were the first of their kind in the world.

The effect of the poolfire area

Up until now, ethanol fire tests have been conducted only in small scale. The conclusion drawn from these tests has always been that petrol fires produce higher heat flux than ethanol fires. From this, it has been assumed that a petrol fire would also be more dangerous in a large scale. What has been overlooked in this reasoning is the effect of differences in the combustion behaviour of the different liquids. Petrol fires produce large quantities of smoke, which increases as the size of the pool fire increases. Ethanol does not have the same tendency to form smoke, which means that it burns more efficiently than petrol does, which can result in a considerable increase in heat flux from large scale fires.

of the main purposes of the tests were to obtain information on heat flux at different distances from the fire, and to measure the burning rate. In order to obtain as much information as possible over 40 measuring points were set up to record temperatures and heat flux levels around the fire. A special design of a plate thermometer, specifically suitable for outdoor use, was developed for the tests. Based on the measured temperatures, it was possible to calculate the heat flux levels around the pool.

The tests were filmed from several angles, using both video cameras and IR cameras in order to obtain information on flame height, flame temperature and flame area. 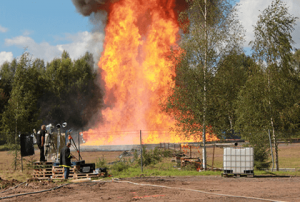 The fire tests were documented with video cameras and IR cameras.

The two tests were performed at the local Fire and Rescue Services training grounds at Bysjön in Borlänge, each using 20 000 litres of ethanol fuel. The concrete basin that was cast especially for these tests had a diameter of 18 m and a surface area of over 250 m. The first test involved E97, which is a mixture of 97 % ethanol and 3 % petrol, and also known as denatured ethanol. E97 is the ethanol grade that is stored at the petroleum company fuel depots.

The second test was carried out using the E85 commercial product (85 % ethanol and 15 % petrol).

Excellent weather conditions when the tests were carried out meant that the measured data from both tests are directly comparable with each other. There was a notable difference in smoke production between E97 and E85, with E85 producing significantly more smoke than E97 due to its higher petrol concentration.

Ethanol fire tests in this scale have never previously been carried out. The scale, in combination with favourable weather conditions and successful tests, provides highly reliable data that can be used for future research and risk assessment and planning of future fuel depots.

Results from the tests

The results from the tests are still being processed, but one very important conclusion is that large scale ethanol fires produce high heat flux levels. The results also clearly demonstrate that the effects of scale must be considered when assessing the risks associated with fires in flammable liquids.

Up to now, no one has succeeded in extinguishing a large tank fire of burning ethanol. As ethanol is a polar liquid, it dissolves the foam that is normally used to extinguish a petroleum fire. The next part of the project will therefore investigate methods of extinguishing ethanol tank fires by means of fixed installed systems, as well as investigating the equipment and tactics needed for a mobile extinguishing operation by the Fire and Rescue Service.