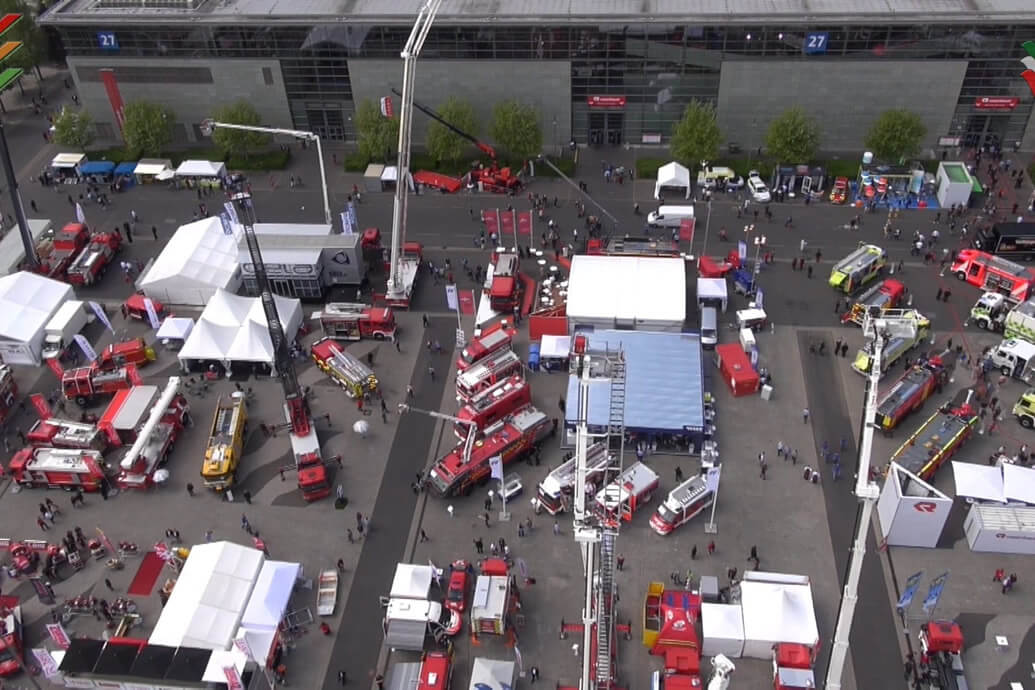 Interschutz reaches new heights as the gates closed on what proved to be a record-breaking INTERSCHUTZ, as the world’s flagship exhibition and networking hub for the fire prevention, disaster relief and safety & security sectors. Approximately 1,500 exhibitors from 51 nations were in Hannover to showcase their products and services – an all-time high. The six-day show attracted an enthusiastic audience of 157,000 visitors from around the world (compared with 123,266 in 2010). Particular praise was reserved for the high quality of trade visitors from the sectors of fire prevention, disaster relief, rescue services and safety/security. This added up to INTERSCHUTZ 2015 being the biggest and most well-attended edition of the event ever.

INTERSCHUTZ 2015 delivered an outstanding performance in every area – number of exhibitors, attendance and total display area. Visitors experienced a plethora of highlights, including aerial ladders and telescopic platforms which reached record heights and conflagrations that were extinguished in a matter of seconds on the open-air site. The event also featured a number of world firsts.

“This edition of INTERSCHUTZ struck a resounding chord, displaying a stunning array of innovations, tremendous international drawing power and keen interest on the part of visiting professionals,” remarked Dr. Jochen Köckler, Member of the Deutsche Messe Managing Board. “But this was not merely a top-notch exhibition; it also excelled as a one-of-a-kind community happening, thanks also to the strong backing of our partners: the German Fire Protection Association (vfdb), the German Fire Service Association (DFV) and the German Engineering Federation (VDMA),” he added.

Dirk Aschenbrenner, President of the German Fire Protection Association, also spoke at the Saturday press conference. His take on INTERSCHUTZ 2015: “The event surpassed all expectations – not only in terms of the statistics, but also due to the remarkable atmosphere here at the sector’s flagship fair. Our goal of making the world a bit safer has been achieved in outstanding fashion at the biggest-ever INTERSCHUTZ, which truly lived up to its pledge: ‘Destination: Future’.”

Hans-Peter Kröger, President of the German Fire Service Association (DFV) highlighted the special character of the event: “INTERSCHUTZ is the ultimate success story. Rather than being just a platform for selling products and services, it has become a cult event for fire services everywhere!” He went on to note the event’s special significance for volunteer firefighters: “This fair has given our firefighting volunteers of every age bracket, from kids on up to retirees, a huge shot of inspiration and motivation for the years ahead.”

And in the words of Dr. Bernd Scherer, Managing Director of the German Engineering Federation (VDMA): “INTERSCHUTZ is more than just a trade fair. It sets the course for the industry and represents a networking event for the community of ‘helping hands. The enormous interest in technology and innovations displayed here has resulted in firm investment plans and we are highly optimistic with regard to the 2016 business year.”

Popular events in the “Rescue” display category at INTERSCHUTZ 2015 consisted of the Rescue & Disaster Relief Forum and the Emergency Medical Symposium, which provided in-depth coverage of all the key rescue display topics. The fire brigade segment offered a convincing array of events like the “Destination: Future” voluntary firefighters’ convention, staged by the German Fire Service Association, which successfully underscored the importance of preserving the institution of voluntary fire brigades. And the Safety & Security segment focused on critical infrastructure issues, drawing the participation of numerous specialists from the field.

Exhibitor displays at the event were complemented by a diverse supporting program featuring product presentations, competitions and live shows throughout the week. Spectators were delighted by the spectacular demonstrations and competitions such as “The Toughest Fireman Alive” and the “German Rope Rescue Championship”. And the vintage fire truck exhibition, mounted in partnership with the Hannover Tram Museum, further contributed to making INTERSCHUTZ 2015 an unforgettable experience for the entire community.

The next INTERSCHUTZ will run from 15 to 20 June 2020 in Hannover, running congruently with the 29th German Fire Service Day.