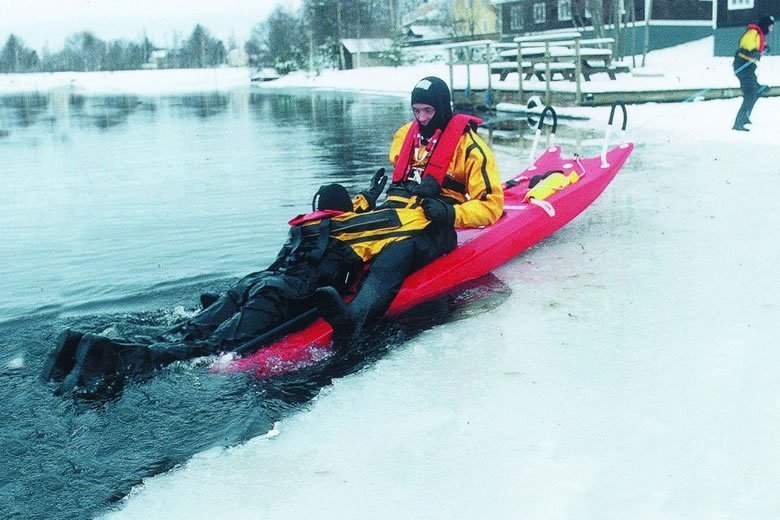 When Urban Kraft, a keen Swedish windsurfer, was practising for a windsurf competition on an ice-covered sea, he could have never imagined the outcome. He noticed that as the ice was breaking his floating board had the potential to be used as an ice and water rescue platform. He worked closely with the Swedish lifesaving association, professional’s rescuers and developed a stable rescue board that could be used to transport both the victim and rescuer at the same time. His idea became the Mayday-Hansa-Board, an essential piece of lifesaving equipment used by professional rescue teams around the world.

Stockholm Fire Captain Alf Alexanderson was one of the first persons to test the Mayday-Hansa-Board, which is manufactured by Mayday Scandinavian International AB in Sweden. Having tested this piece of equipment in the field for over 15 years, he knows that it could improve water and ice rescues everywhere. Captain Alexanderson highlights “It is important that the rescuer feels safe when operating in a rescue situation on the ice and open water”.

The whole concept behind the Mayday-Hansa-Board is that the board provides the rescuer with nearly all the equipment they need for water and ice rescue, the features include:

While running an ice-rescue training module for Stockholm Fire department´s rescue personnel, Alexandersson tested all the equipment designed for rescue operations. “The Mayday-Hansa-Board came out best in every situation Alexandersson says, some very difficult and dangerous operations made us focus on how a rescue could be performed better and safer, the Mayday-Hansa-Board was the best answer”. When a rescuer wears a dry suit the rescuer is enabled to reach a person in most  water and ice conditions. Alexanderson says “I have never experienced a tool that works as well in different types of scenarios as the Mayday-Hansa-Board, and I say that based on my own experiences”.

As well as being carried on rescue vehicles, applications for the board include being carried by helicopter and as a compliment aboard boats. The board can be used as a sleigh or a stretcher and has been used by divers and fire-fighters as a sledge to transport equipment.

The Mayday-Hansa-Board has been in use for over 15 years on the global market. In Sweden, every fire department is equipped with at least one Mayday-Hansa-Board, and the first responder vehicle to a rescue operation is equipped with the board as standard. The board is carried on the roof sometimes in a specially made aluminium box; on custom made vehicles the board housing is included in the concept design.

Training and using the Mayday-Hansa-Board

Fire captain Alexandersson focuses on the following key points when training with the board.

Rescue Captain Alf Alexandersson says, “With the Mayday-Hansa-Board as life insurance, I can focus on the rescue operation without anxiety for my own security. I can be confident that when there is a dangerous situation I am able to perform a good and professional rescue operation”.

Training together for Rescue Coordination

Preparing for Search and Rescue Operations