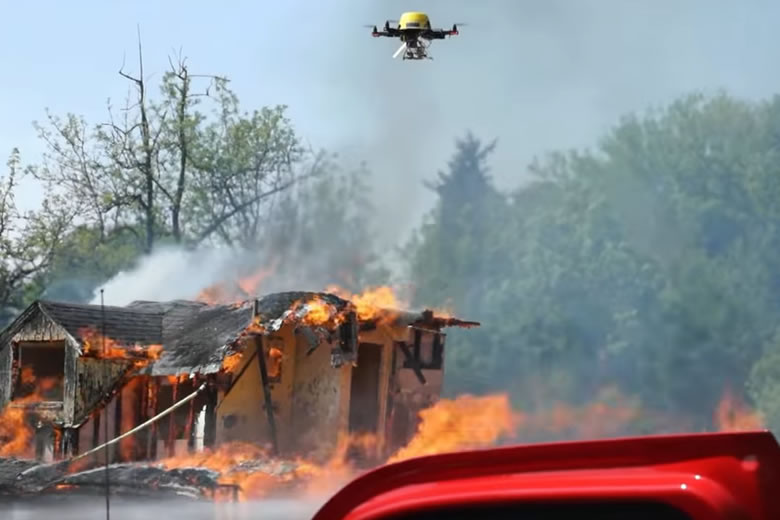 Far from an isolated incident, wildfires are a growing problem across the world. Climate change is disrupting traditional weather patterns, leading to an increased risk of fires – even here in the UK, as April’s Marsden Moor fire demonstrates.

Unfortunately, it can be difficult to suppress wildfires with traditional firefighting methods. In a hot, barren climate, tinder-dry brush and undergrowth are a potent fire risk that can quickly burn out of control. At the same time, tight budgets and falling staff levels mean that fire services are under more pressure than ever. One in five firefighter roles that existed in 2010 no longer exists.

To protect citizens, their teammates and the UK’s infrastructure, some firefighting units are looking to new tools to assist them – in the form of drones. While it might seem like an idea that belongs to the distant future, it is in fact much closer than you might think.

The future of fire detection, mitigation and suppression

In turn, this increases safety for your fire service and minimises lost time. Fire services such as the West Midlands Fire Service are already using drones with thermal imaging cameras to improve situational awareness.

The potential of drones extends far beyond fire detection. In the near future, these vehicles will mitigate and suppress fires too. Pilot initiatives are already underway, such as the Windracers’ SWARM project with the UK’s Future Flight Challenge, which is using multiple drones to suppress forest fires with water and fire suppressant drops. This creates a ‘swarm’ of drones that can function as a coordinated system.

In the event of a wildfire, the fire service could deploy the unmanned drone swarm from a remote location and send it to the impacted area to create a rain-effect over the fire. Because the drone swarm does not rely on human intervention, it has significant benefits over traditional firefighting methods. Firstly, it reduces the potential of harm to the unit, which would otherwise have to operate in perilous environments. As well as this, drones can operate in all visibility conditions – day or night – giving them significant advantages over helicopters.

Not only that, but in densely populated areas and cities, drones will be able to assist with fires in skyscrapers, offering visibility and access to higher floors that firefighters may historically have struggled to reach.

The 2030 vision for blue light services

Unmanned aerial vehicles and drones will become a cornerstone of blue light services in the near future. Their flexibility, cost efficiency and agility will make them an asset to fire services across the UK and the wider world. Employing ground-breaking technologies like this could transform the emergency services and better protect citizens. They are already helping with search and rescue operations, and hold even greater opportunities for all blue light services, not just fire and rescue.

Now is the time for fire services to build on the success they have already had with electric flight technology to develop and expand the use of drones for safety and rescue operations. This can support the work of fire and rescue services by enabling rescuers to provide the fastest and most effective response, covering large areas in any weather conditions, while reducing the risk to crews and the public.

By 2030, the Future Flight Challenge, in collaboration with UK emergency service units, is aiming to develop drone operations that transform rapid first response in a range of scenarios, including citizens rescue, fire response and situational awareness. It is looking to those in search and rescue to join in and advance the next generation of aviation in a way that best suits the sector’s needs.