Hose manipulation with jets of liquid 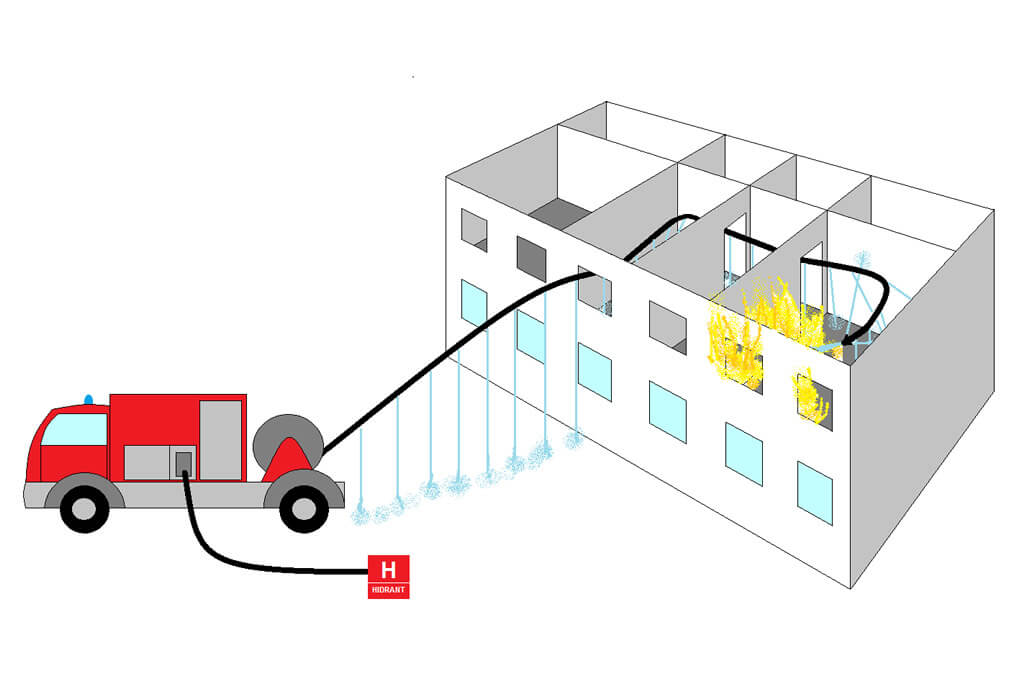 The Fire Product Search team were recently contacted by Davor Eberl with an interesting invention in the search for a technically more advanced and safer strategy of fire fighting – Hose manipulation with jets of liquid.

Application of the liquid-jet control principle and related thrust forces

Hose manipulation with jets of liquid

Abstract
Innovation was drafted-in in the search for a technically more advanced and safer strategy of fire fighting. The resulting solution has a strong interdisciplinary character as it requires and utilises knowledge from mechanical engineering, electrical engineering, as well as computer science.
In all of the existing patents that exploit the thrust forces of jets of liquid, the jets have always been positioned at the end of the supply hose only. This fact severely limits the range of access by known solutions as the gravity force of the supply hose and contained liquid is too large and inappropriately oriented to allow any serious practical usage. Distribution of the jets of liquid and their thrust forces along the supply hose is the natural solution to this problem and actually the essence of this innovation. By adding the ability for changing and controlling the thrust and direction of every single jet of liquid, we have obtained a device which can take off and allows us to control its stable hovering and movement.

1. Introduction
In order to achieve stable hovering of the hose, the thrust forces of jets of liquid need to have the same sizes and opposite directions in relation to the resultant gravitational and potential wind forces that the hose is exposed to. Any changes in the sizes or directions of the forces spoil the balance and result in movement of the hose.
The beginning of this article describes the presented device’s construction and utilised principles. The relevant physical background is included in order to explain its influence on feasibility and usefulness. Presentation of the current prototype is followed by a section related to the control of the device. Theoretical usage possibilities are briefly explained at the end of the article.

2.1 Device description
The basic building element of the system (Figure 1) is an active unit for splitting the flow of liquid, which is comprised of an inner sleeve (pos. 1) and an outer housing (pos. 2) [1, 2]. Sealed rotation (pos. 5) of the housing around the inner sleeve is controlled by a small electric motor (pos. 10) via gear transmission (pos. 11). Electronically controlled valve (pos. 8 and pos. 13) together with a nozzle (pos. 9) are attached fluidly to the rotatable outer housing. The valve regulates the flow of the liquid exiting the housing and flowing towards the nozzle. In general, the jet of liquid is perpendicular to the axis of the unit but this angle can be changed within a limited range by rotating the nozzle in the plane going through the imaginary axis of the unit.

Such a unit construction allows arbitrary control of the flow and direction of the jet of liquid and at the same time the necessary control of the size and direction of the corresponding thrust force.
When the aforementioned control units are serially interconnected and appropriately spaced with segments of flexible high pressure hose and one end is connected to a source of pressurised liquid, we obtain a device that can overcome its own weight and allows us to control its stable hovering and movement.

The size of the jet thrust force is regulated by changing the flow of the liquid through the valve and the nozzle. The maximal thrust force has to be greater than the total weight of the device segment that it has to carry. This includes the weight of the unit, the adjacent segment of the hose and the weight of the contained liquid.
Thrust force (F) of a jet of liquid (Equation 1) depends on the square of its exit speed (v), the exit surface area (A) and the specific density (?) of the selected liquid (? of water = 1000kg/m^3) [3].

The exiting speed (v) of the jet (Equation 2) depends on the difference (?p) between the pressure of the liquid in the hose and the external air pressure, and also on the specific density (?) of the selected liquid [4, 5].

A factor c_v (0 ? c_v <1) is decreasing the exiting speed of the liquid due to the pressure drop in the exit installation. This pressure drop mostly depends on the valve position and is used for regulating the thrust force.
The results of theoretical calculations pertaining to a single segment of the device showed that sufficient thrust force can be achieved with existing pumps for liquids.

2.2.1 Influence of the pressure on the device’s feasibility

Calculations derived from equations (1) and (2) showed that the volumetric flow rate necessary to achieve a certain thrust force decreased considerably with any increase of pressure ?p (Figure 2). At higher pressures, the exiting speed of the liquid was higher and the nozzle diameter for achieving the same thrust force was smaller.
This means that the pressure of the liquid source has an important influence on the feasibility of building a useful hose manipulation device. Higher pressure and smaller volumetric flow rates of jets distributed along the length of the hose at the same time mean lower speeds of the liquid streaming through the hose and a smaller pressure drop along its length.

The results of these calculations point to the conclusion that the theoretical length of the device mostly depends on the power of the pump needed to provide sufficient volumetric flow rate of liquid at sufficiently high pressure and on the capability of the device to withstand such high pressure.
?
3. Prototype design

The inner sleeve, the housing, the valve and the nozzle are all machined from aluminum, whilst the base for attaching the servo motors and the toothed wheel are 3D printed with ABS plastic.

Every unit of the device is equipped with its own microprocessor controller and the necessary sensors for determining the position and movement of the unit. This electronic circuit generates signals for direct control of the servo motors. It can be programmed and parameterised for autonomous operation. It is also capable of mixing input command signals with the pre-programmed response signals that are based on the sensor inputs.
For more complex movement and controlled reshaping of the device, the operation of the controllers has to be coordinated by a computer. A two-way communication with every single controller has to be established and constantly maintained for that purpose. The cable that powers the device can also be used for establishing the necessary communication network.
Based on the data received from the controllers, the computer is able to determine the position, the shape and any movement of the device. This information is used for calculating and issuing of corrective commands to corresponding controllers.

The selection of appropriate sensors depends on the size and specific usage of the device. Electronic gyroscopes and accelerometers for all three spatial axes are the most probable and almost mandatory sensors. Additional sensors may include pressure sensors, magnetometer-based compasses, GPS receivers, ultrasonic distance sensors, and sensors for measuring wind and temperature.
For a precise remote control of the device, optical and/or thermal cameras could be mounted at the end of the device. For guidance through the narrow openings and inside the buildings, stereoscopic cameras would be very useful for providing a 3D FPV (First-Person View) to the operator.

Searching for a new safer way of firefighting was the main motivation and the source of the idea. For the firefighting purpose, the device would need to be thermally insulated against external high temperatures. Luckily, the water flowing through the hose effectively cools the device from inside. Part of the water could even be sacrificed and used for cooling the external surface of the thermal insulation.
For urban firefighting usage (Figure 4), the device would most probably be equipped at its end with at least one (potentially thermal) camera and a larger remotely directed jet of water with compensated thrust force (with opposite jets). Installation and usage of the sprinklers for generating a fog of small water droplets is possible practically anywhere on the device.

In order to avoid unnecessary loss of water for reaching the level of a fire on higher floors, the reel where the device is wound could also be mounted on top of an extendable pole or a ladder.
A large scale device for wildfire fighting would require a very powerful pump and practically endless source of water within the vicinity of the pump (river, lake or sea). Vessels floating on the water seem to be very well suited for that purpose due to the abundance of water and the presence of a powerful driving engine which can also drive the pump. Curtain created by the jets of water would be expected to be very efficient for extinguishing and preventing the spread of wildfire.

The reservoirs often have very small openings. This fact usually makes cleaning and maintenance of the interior a difficult task. Most likely there are corners that are almost impossible to reach.
When using a smaller scale version of the aforementioned device, every corner of the reservoir interior can be reached. Powerful jets of liquid can mechanically remove and flush-out the accumulated sediments.
In the case of hydraulic reservoir maintenance, jets of hydraulic oil could be used instead of water. Spending time and effort on removing water from the reservoir could be eliminated in this way.
Similarly, the device could be used for the removal of moss and rotten leaves from the roofs of buildings.

5.3 Some other usage possibilities

Transporting a rescue rope to a drowning person on heavy seas, or on thin ice
Transporting the towing rope between ships or landing rope on heavy seas
As a mobile device for the irrigation of farmland
For snow production and covering the ski slopes (with some technical adjustments)
Quick laying of a temporary water supply installation
For decorative purposes as an attractive dynamic fountain
Underwater manipulation and rescue operations (capsized vessels)

This article presents the basic idea of a granted Slovenian patent and a pending international PCT patent application for a hose manipulation device with jets of liquid. The main idea of the invention is to lift and control the hovering and movement of the device connected to a source of pressurised liquid.
Basic theoretical calculations of thrust force in relation to flow rate and pressure were introduced. For 10 N of thrust force, water flow rate of 13 l/min is needed at 1 MPa pressure.
The presented patented device can be used for different applications such as firefighting, cleaning and maintenance, rescue purposes, etc. A prototype of the presented device was recently constructed and the first measurements will be performed in the near future.