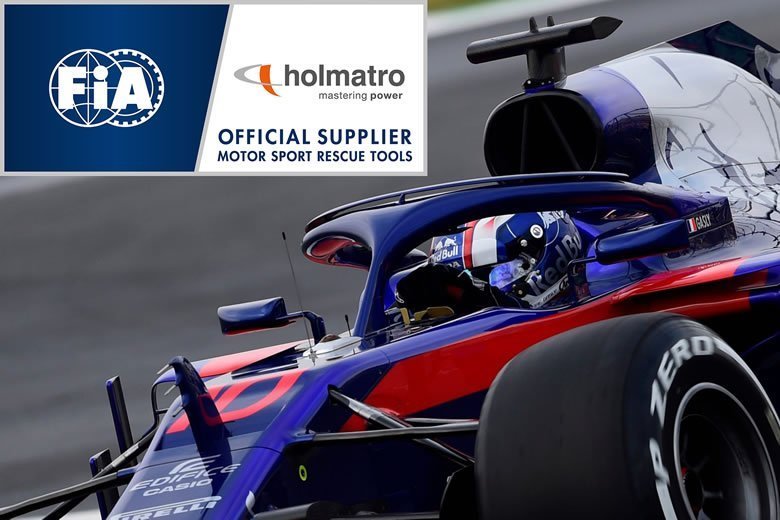 As officially announced at the FIA Conference 2019 in South Africa on May 1st, Holmatro is now a FIA Official Supplier and will provide its latest hydraulic cutting and spreading equipment to FIA sanctioned circuits worldwide.

As part of the new agreement Holmatro will work with the FIA Safety and Medical departments to provide equipment along with training to support local crews and ensure the highest standards. In addition, FIA National Sporting Authorities will have direct access to FIA approved and standardized Holmatro rescue equipment for its racing series.

From Race to Road Safety

Having supplied tools for the IndyCar safety team since 1991, Holmatro has become a leader in manufacturing rescue equipment to assist in the quick and safe extrication of race drivers following incidents on track. Holmatro’s cordless and powerful tools are ideal for the motor sport environment, where drivers need to be extricated from carbon fibre monocoques and high-strength roll-cage structures. Over the years it has been Holmatro’s goal to translate their learnings in racing into innovative rescue tools that raise the level of global post-crash response.

Adam Baker, FIA Safety Director, said: “We are delighted to be able to provide Holmatro’s state-of-the-art equipment to our circuits worldwide. It is crucial that rescue teams have access to the latest rescue tools which meet the rigorous standards we set and to training programs that further enhance safety.”

Harm Hermans, Holmatro CEO, said: “Holmatro is proud to be chosen as an official supplier to the FIA and bring our rescue equipment to circuits worldwide. We believe in constant improvement and innovation when it comes to safety, and this is a further demonstration of the quality of our world-class tools and extrication training & consultancy.”

The Fédération Internationale de l’Automobile is the governing body of world motor sport and the federation of the world’s leading motoring organizations. Founded in 1904, it brings together 240 national motoring and sporting organizations from more than 144 countries, representing millions of motorists worldwide. In motor sport, it administers the rules and regulations for all international four-wheel sport, including the FIA Formula One World Championship and FIA World Rally Championship.

Holmatro is a leading rescue equipment manufacturer founded in the Netherlands in 1967. It is the single biggest global supplier of innovative high-pressure hydraulic rescue tools worldwide, with manufacturing facilities in the US and the Netherlands. With over 400 employees, it has three headquarters worldwide to serve authorized business partners in more than 160 countries.