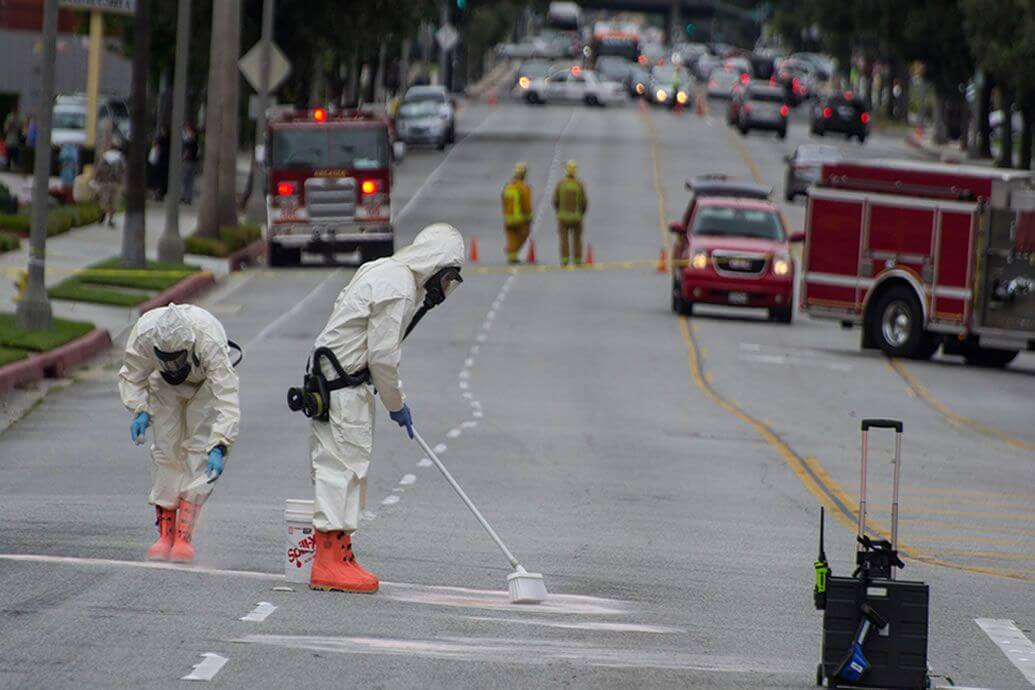 Early one evening the driver of an 18-wheel tractor trailer was suddenly cut-off by another vehicle and forced into evasive manoeuvres, swerving left and right in the midst of a construction zone on busy Interstate 80. After hitting the brakes and stopping, he heard and felt his cargo tumbling and falling.

This was no ordinary cargo of garden-variety consumer or durable goods; inside were nearly two dozen 55-gallon drums of hazardous materials – heavily concentrated peroxides, hydroxides, hypochlorites, nitric acid and sulphuric acid. On checking the back of the vehicle the driver discovered that the barrels had been knocked over. They were leaking. He immediately calls 911.

First on the scene was Mike Bradley, a Type-One hazmat team coordinator and Fire Captain of Roseville’s Engine Company One with his team. Immediately recognising the severity of the incident he requested the balance of the hazmat task force. This brought Truck 1 with Captain Greg James, Battalion Chief Kevin Morris, and several California Highway Police officers.

Confronted by a strong odour, and upon reviewing the driver’s Material Safety Data Sheets paperwork – which indicated the chemicals’ high concentrations – Kevin Cullison, the Technical Reference Specialist contacted experts at the chemical company. His worst fears were confirmed. The chemists told him that it was a volatile cocktail of acids and bases that, if mixed, were prone to rapid chemical chain reactions. If it combusted there was the potential of a fast-moving firestorm of massive proportions.
“You mix one of the very concentrated bases with of the very concentrated acids and there’s the threat for a caustic, chlorine gas cloud,” said Bradley. The 313-bed Sutter Roseville Medical Centre and two major hotels were located a mere half-kilometre downwind; sitting ducks to a potentially toxic, life-threatening cloud.

Morris, Bradley and James led the pre-entry briefing to outline strategy and tactics – investigate what spilled, identify with certainty the spilled material, and determine the appropriate next steps. “Do we simply right the barrels? Are the barrels damaged, and do they require over-packing in a larger barrel? Do we transfer the materials into a new, undamaged container? You really don’t know what the best course of action is until you are in the hot zone,” says Bradley.

The 11-member team decided to do a Level A entry with the two first responders (and their back-ups) protected by certified NFPA 1991 (Standard on Vapour-Protective Ensembles for Hazardous Materials Emergencies) hazmat suits, having breathing apparatus contained inside the lightweight, fully-encapsulated ONESuit Flash chemical protective hazmat suits. “Going into the truck, righting those barrels within that toxic stew, we didn’t want any risk of exposure for our guys,” Bradley notes.

Interstate 80 is a transcontinental highway that runs from downtown San Francisco, California to Teaneck, New Jersey in the New York City Metropolitan Area – the second-longest Interstate Highway in the United States. The spillage incident caused two lanes to be shut down; emergency lights were brought in to the staging area, and the two first responders entered the truck. They crawled over and around the heavy, leaking barrels, righted them one by one, and applied absorbents over the remaining chemicals on the base of the vehicle floor.

Crisis contained and mission accomplished, private contractors moved in afterward to do clean up and safely repack the materials for shipping to their original, final destination. Describing the entire process as an eight and a half hour “adventure,” Bradley gives voice to what legions of hazmat personnel know from training and first-hand experience: “Everything in hazmat is done in a very methodical fashion. No steps are skipped because the consequences of somebody coming into contact with those chemicals are really awful. So you make the plan, you make a back-up plan, and then you formulate a back-up plan to the back-up plan.”

That level of precision and risk-abatement is certainly the case in terms of equipment and protective garment choices as well. Little did Bradley know at the time that another incident was lurking just 30 days in the future.

The Union-Pacific’s Davis Yard in Roseville, the country’s largest rail switching facility west of the Mississippi, is stretched out over a vast four square kilometres. It was here that a rail car’s compromised pressure valve sent its contents – syrupy, sticky, caustic sulphuric acid at 98.2 percent concentration, the highest concentration allowed by law – spewing into the air and over the sides of the shipping container.

“This is serious stuff – if it comes into contact with you it will burn you and it is very difficult to remove,” says Bradley.

The crippled, spewing rail car (dubbed “a puker”) was tugged to a dedicated emergency repair line spur at Roseville. Bradley’s team and Battalion Chief Morris converged on the scene and were briefed by Ben Salo, the railroad’s dedicated hazmat expert.

One can only guess what first responders at that incident were thinking. An incident in the same train yard nearly 40 years ago is part of local folklore. On April 28, 1973, 18 boxcars loaded with bombs en route to the Concord Naval Weapons Station began detonating in the yard after one of the cars caught fire. More than 6000 bombs detonated, injuring more than 350 people. The explosions caused damage to 5500 buildings.

In this latest incident, Salo’s diagnosis was that the sulphuric acid contents blew out the rail car’s frangible disk valve system, similar in function to a safety relief valve but not able to be resealed.

A three-person, Level B entry team prepped to enter the railcar and contain the situation by replacing the busted valve. They went with ONESuit Shield, a level B suit which shares its level-A cousins’ lightweight and user-comfort profile but without the internal breathing apparatus.

“Sulphuric acid at that high concentration does not have a very high vapour profile so we didn’t need the Level A,” says Bradley.

The combination of experienced first responders, the proper protective equipment, and the team’s monthly training drills, quarterly practice drills, and annual proficiency examinations paid off yet again for their safety and that of their neighbours. Faulty valve removed and new valve installed, and the crisis was successfully averted.

At the time, Bradley noted that his team had used “other Level B suits in the past that were certified to NFPA standards” but due to the flexibility and comfort of ONESuit Shield, he is replacing his older Level B older suits with ONESuit Shield. Given the recent unwelcome frequency of hazmat incidents in this small city of 110,000 people, one can hope that his orders have already been placed.

Roseville is no stranger to major hazmat incidents. 40 years ago 18 boxcars loaded with bombs began detonating in the yard after one of the cars caught fire. More than 6000 bombs detonated, injuring more than 350 people. The explosions caused damage to 5500 buildings.

For further information, go to www.saint-gobain.com