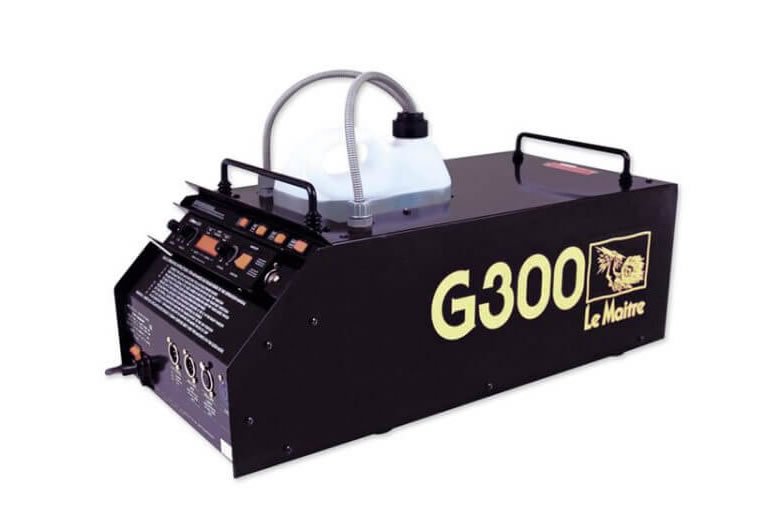 The G300 Smoke Machine is a dual-mode machine, offering water based smoke and haze. Designed to perform in the most demanding of applications.

The G300 can be used with Le Maitre’s own Industrial Smoke Fluid. This water-based, non-toxic fluid is perfectly engineered for BA training. A combination of mono/polyglycol, glycerol and de-mineralized water, produces a dense white smoke with consistent particle size and a lengthy hang-time, sustainable even at high temperatures.

The G300 uses a low pressure system to produce the safest smoke. The higher the pressure internally in the heat exchanger, the higher temperature the fluid is heated to. This can lead to molecular charring causing free radicals to be formed. This in turn can lead to all sorts of unpleasant molecules to be formed. Whereas with a low pressure system such as that used in the Le Maitre’s machines, the temperature is much easier to control and the units are able to produce smoke that has not been burned at high temperatures.

As with all Le Maitre Smoke Machines, the G300 uses a patented “Layered Block System” called Genesis. Along with this they use a short heating pipe of just 1m which allow the smoke machines to be powered by much smaller wattage heaters than competitive models, but still give immense power. Furthermore, Le Maitre’s heater blocks can be dismantled and serviced or replaced, while competitive a cast blocks cannot, becoming scrap once they reach the end of their life.

The G300 Smoke Machine is made in the UK.

Other products by Le Maitre