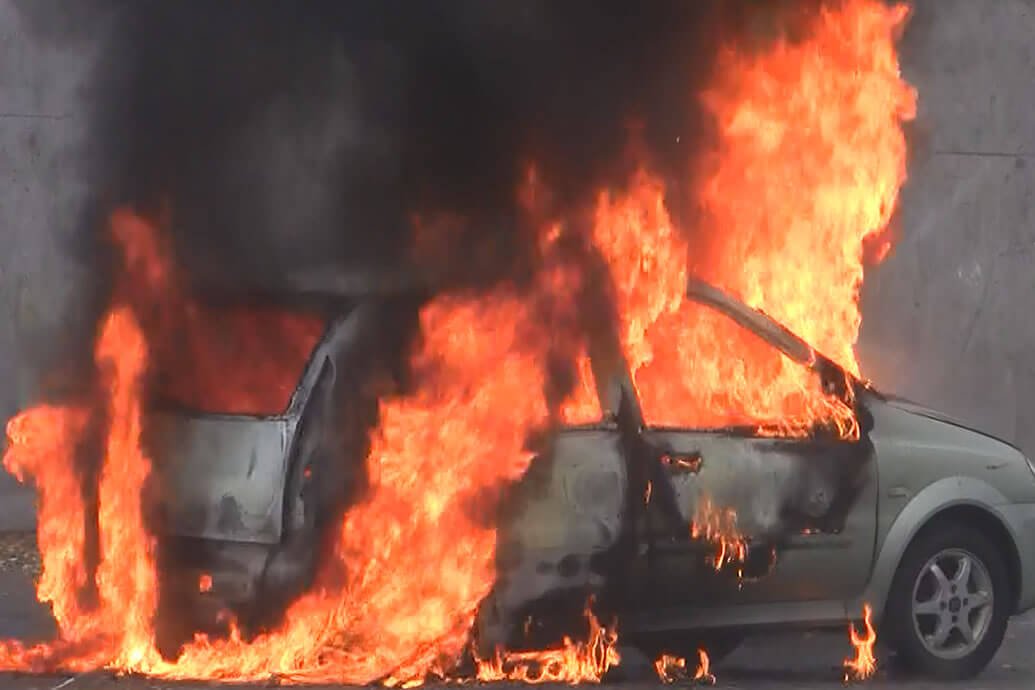 In collaboration with Skien Fire Department, Grenland Energy and the University College of Southeast Norway, SP Fire Research has performed a Full Scale Electric Vehicle Fire Test on two electrical vehicles (EVs). The aim was to study how the battery pack in an EV behaves when exposed to mechanical damage, if the car catches fire, and how much water is needed to extinguish the battery fire. Our contribution was financed by the Norwegian Directorate for Civil Protection (DSB). 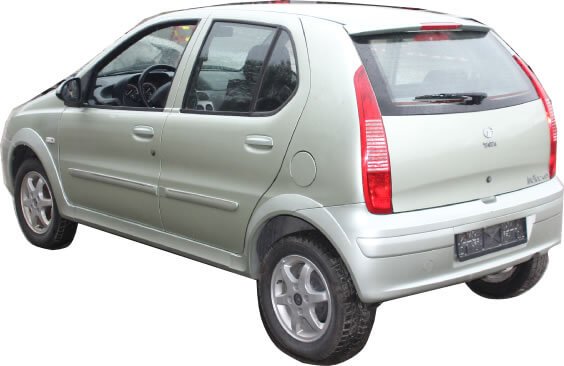 Two fire tests were conducted-  a fire was initiated by mechanical damage in one test and ignited by an external fire source in the other test. The cars were imported gasoline cars with brand name Tata (Figure 1), and were rebuilt to EVs. The batteries consisted of a 26 kWh Li-ion battery with Nickel Manganese Cobalt Oxide (NMC) cathodes and were divided into 12 modules (Figure 2), with 30 cells in each module. Thermocouples were used to monitor the temperature on the battery surface and in the coupé. Smoke development was monitored by visual observations. 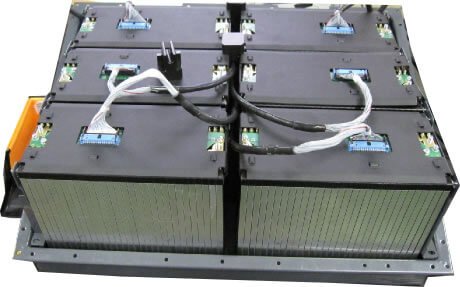 The aim of Test 1 was to study whether a mechanical impact on the car could initiate thermal runaway in the battery and lead to a fire. The car was lifted to 20 m with the rear end pointing downwards. The car was dropped and hit the ground with a velocity of about 70 km/h, which can be related to a car crash from behind. Temperature curves from test 1 are given in Figure 3. 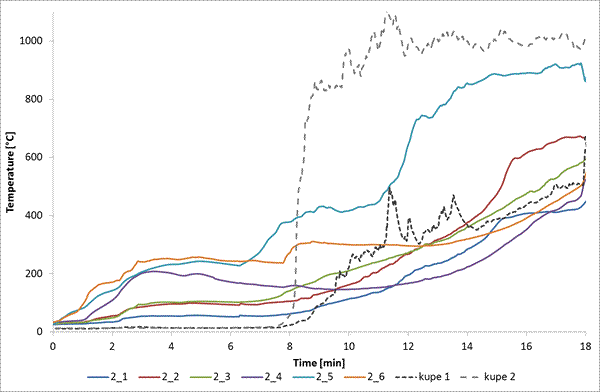 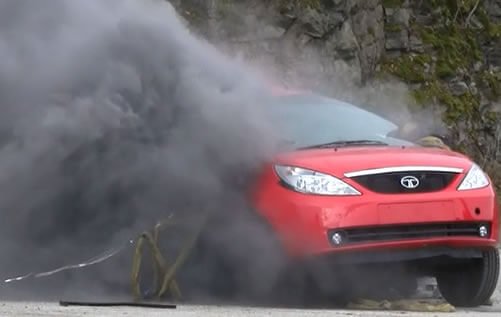 However, after about 6 minutes the temperature increased quickly again and the battery started to burn (Figure 5). The fire spread to the rest of the vehicle, and after 9 minutes the car was engulfed in flames. The car was allowed to burn freely thereafter, and was completely burned out after 90 minutes. The battery pack, however, was warm for a long period after the flames had extinguished. The temperatures measured on different parts of the battery pack were between 310 and 540 °C during the 150 minute period after the impact. 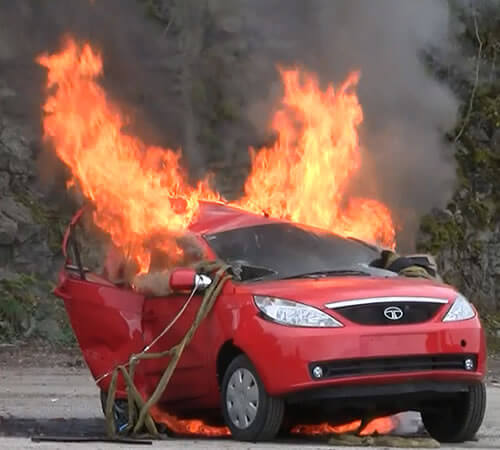 The aim of Test 2 was to initiate thermal runaway in the battery by external heating of the battery and the car, and to investigate how much water is needed to extinguish the fire. A small propane burner was positioned under the vehicle, directly beneath the position of the battery. Temperature curves are shown in Figure 6 and Figure 7. 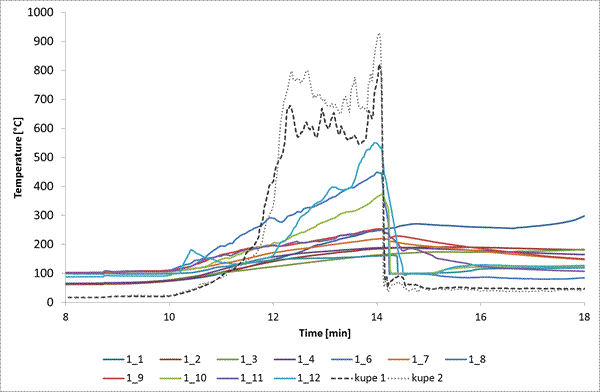 Two extinguishing attempts were performed. The first attempt was conducted after 14 minutes (Figure 6). All visible flames were extinguished and about 100 liters of water were used. The fire reignited shortly thereafter and grew to full size again. 28 minutes after start of the test the second attempt was carried out (Figure 7). At this point the car had been fully engulfed in flames for several minutes (Figure 8). The attempt lasted for about 4 minutes, and 550 liters of water were used. The flames went out and the temperatures did not increase again. 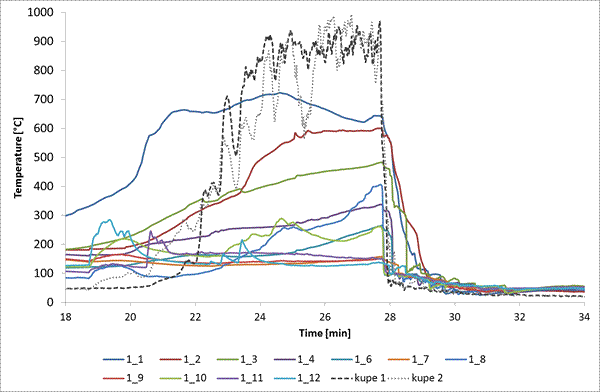 Earlier experience with automotive battery fires have shown that large amounts of water are needed for extinguishment. The result from this test, however, shows that both the amount of water needed and the time consumed are similar to a conventional car fire.

By studying the temperature curves and the batteries, it was found that the battery cells did not reach thermal runaway in Test 2. When the battery has not reached thermal runaway, it is expected that an EV fire can be extinguished just as fire in a conventional vehicle. 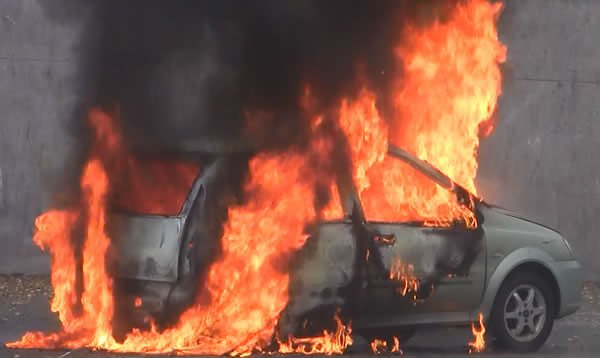 1    A vehicle battery may suffer great damage due to a mechanical impact, and thermal runaway may be initiated that results in a fire.

Although the battery started to burn in Test 1, it is important to know that this will not happen every time a collision occurs. This will be affected by several factors, such as impact energy, how well protected the battery is, and what type of battery chemistry is used.

1    A battery where thermal runaway has occurred may be hot for a long period of time.

A battery that is hot for a long period may affect how it should be handled after a collision, and by whom.

2 – Even if an EV burns heavily, the battery cells may not have reached thermal runaway, and the fire may be extinguished like a conventional car fire.

If the result from Test 2 can be reproduced for other EVs, this is an important finding. It could mean that an EV that catches fire due to an external cause (spread from external fire, arsonist etc.) may be extinguished like a conventional car fire.