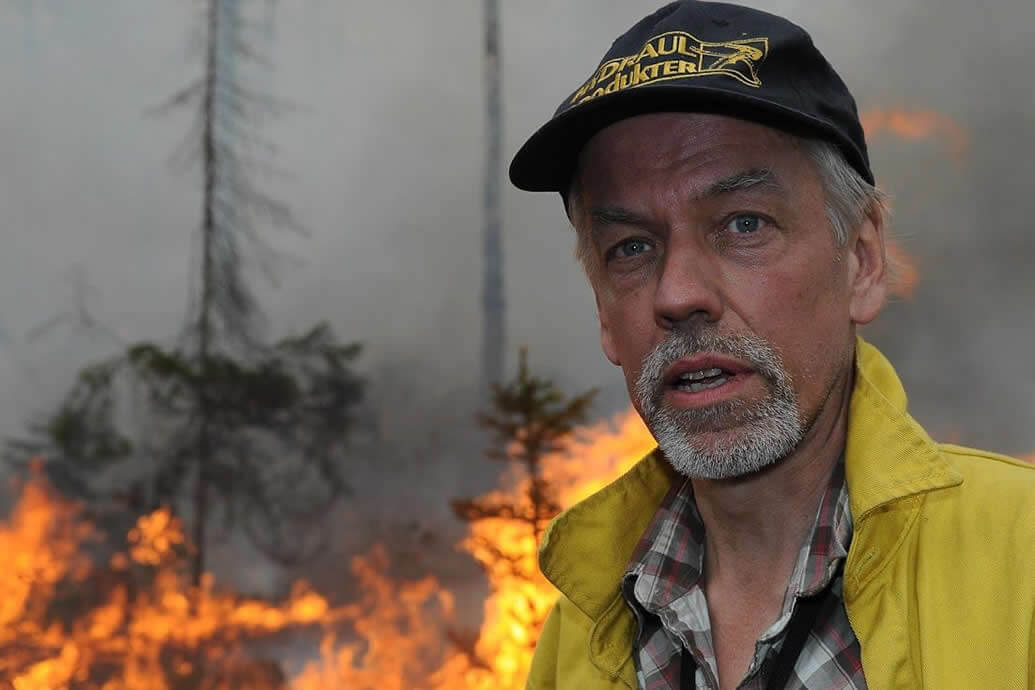 Forest and Grass Fires in Sweden are examined in a collaboration with the Swedish University of Agricultural Sciences (SLU) and the Swedish Meteorological and Hydrological Institute (SMHI). SP has analysed the wildfire situation in Sweden with regard to geographical distribution, time, and weather and the work, commissioned by the Swedish Civil Contingencies Agency (MSB), is part of a larger project on future-preparedness and risk evaluation in a changing climate.

The fire in Västmanland County, Sweden, in 2014, in which one person was killed, 25 buildings burned down, and many people evacuated, has raised the question of society’s preparedness for and knowledge of wildfires in general, and forest fires in particular.

Generally, wildfires are not a big concern in Sweden. Fires are a natural part of the life cycle of a forest, and significant for the preservation of biodiversity and the cultural landscape. At the same time, wildfires pose a risk to property, health, and lives. Larger fires may also affect functions that are essential to society, leading to local environments being seriously impacted and high financial costs. The fighting and eventual extinguishing of a wildfire is a very resource-intensive operation for municipal rescue services.

For the analysis of the wildfires, MSB’s incident database (IDA), which covers all incidents that have led to the deployment of a fire brigade unit since 1996, was used. A ‘wildfire’ was defined as ‘fire – not in a building’, wherein the fire objects were ‘productive forest including clearings’, ‘other tree-covered land’, and ‘other non-tree covered land’. For the years between and including 1996 and 2014, an annual average of 4,807 incidents was reported, corresponding to a burned area of 2,919 hectares (ha). These fires were categorised as follows: grass fires (fires in which >50% of the area was ‘non-tree covered’), small forest fires (a maximum burned area of 0.5 ha), and large forest fires (a burned area of >0.5 ha).

The division by size was made so as to distinguish between those that were potentially dangerous and those that were extinguished relatively simply, during the initial attempt. It should be noted that these statistics only relate to fires that resulted in a fire brigade dispatch. Thus, they do not cover those that extinguish by themselves before an alarm is raised, or that are extinguished by a rapid civilian response. 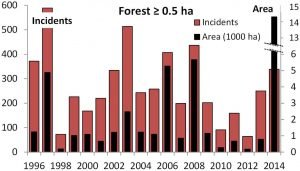 Figure 1 – Forest and Grass Fires in Sweden: The number of large forest fires and corresponding burned area for the period 1996-2014.

Table 1 – Forest and Grass Fires in Sweden: The number of incidents and corresponding burned area logged in the database for the 19 years (1996-2014) that the study encompasses.

In addition, it is estimated that roughly 2000 ha of land is burned in a controlled manner as part of prescribed burning – a substantial percentage of the total area burned annually. Roughly half of all wildfires are grass fires according to the table above, and only 5-6% are large fires, although these contribute a majority (80%) of the burned area. The very largest fires dominate the area burned, with the forest fire in Västmanland County in 2014 causing burned area for 2014 to be five times that of an average year.

The number of fires and area burned vary greatly between years. Warm, dry summers contribute heavily to the total number of fires and burned area; in 1997, for example, nine times more large forest fires were reported than in 1998 (Figure 1). Distribution over the course of a season depends on both geographical location and the kind of fire that is being studied. In general, the season for forest fires in southern Sweden begins in March/April and ends at the beginning of September; in northern Sweden, the season begins much later due to the lingering snow cover (Figure 2).

Throughout the country, large forest fires are unusual before May. The grass fire season begins early in the spring, when the sun climbs higher and the temperature rises. Just a few hours of low atmospheric humidity can cause the remnants of last year’s dead grass to become combustible. When fresh grass grows over the course of the spring, the fire spread is heavily reduced even during dry weather, and the occurrence of grass fires decreases drastically.

A majority of the fires are caused by human activity. Lightning strikes are only the seventh most common cause of ignition; however, lightning strikes may be the cause of several fires reported as ‘unknown’. For small fires, the misuse of open fires, including the burning of grass on private land, children playing with fire, arson, and poorly extinguished camp fires, is dominant. The number of fires increases by 20% at weekends, when more people spend time outdoors in forests, fields, and so on.

It should be noted that, although children playing with fire and arson result in many fires, the total area burned by these fires is relatively small. Lightning strikes are, however, a very common cause of ignition of large fires, as they can occur in very sparsely populated areas and thereby may take a long time to both discover and reach in order to extinguish. Another cause, which is more common for large fires than small ones, is ignition caused by sparks. This often occurs in connection with forestry machinery, in particular land scarification.

The statistical distribution of fires that affect an area of over one hectare very clearly follows a power law, such that the probability of a fire growing to a certain size, x, is described by

. For Swedish conditions, α = 2.0, which means that large fires contribute less to the total burned area than in North America, for example. Using this distribution, it is possible to calculate the statistical recurrence interval for fires of a certain size (Figure 4). 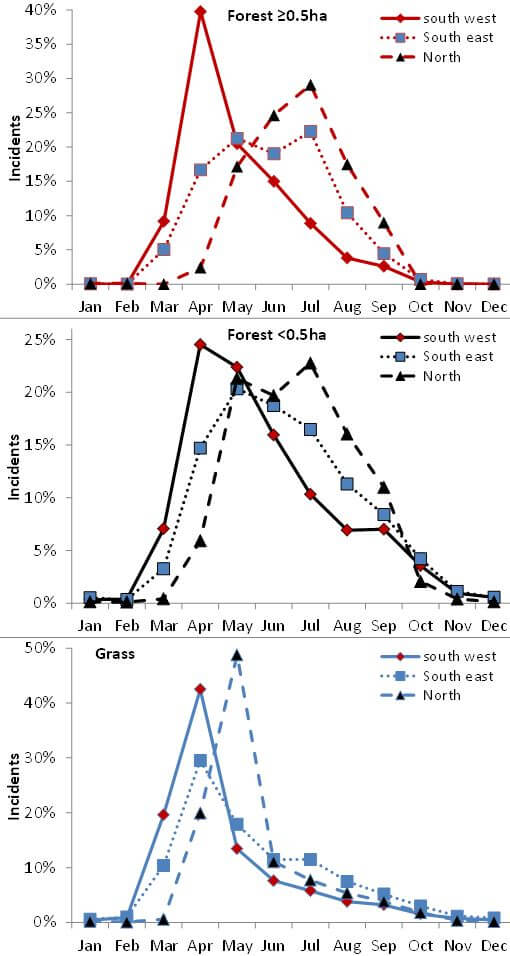 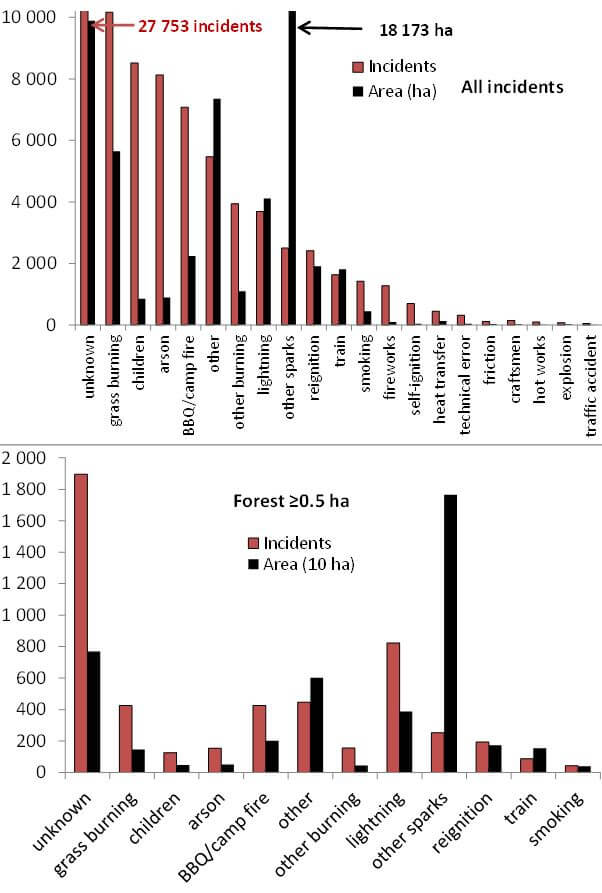 Figure 3 – Forest and Grass Fires in Sweden: (Top) The most common causes of fire, based on the number of recorded incidents. (Bottom) Corresponding statistics for large (>0.5 ha) forest fires. 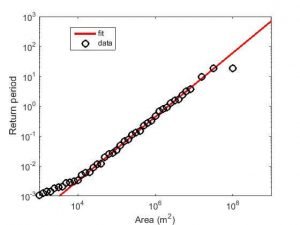 Figure 4 – Forest and Grass Fires in Sweden: The statistical return period in years, categorised by size, for fires of over one hectare.

For example, the statistical return period between fires of a size corresponding to that which occurred in Västmanland County in 2014 is 80 years; for the Boden fire in 2006, 10 years. It should be noted that this is a statistical calculation, and that it should not be expected that such a fire will occur again in exactly 80 years. In addition, the landscape undergoes change continuously, as does the way in which the land is cultivated, both of which affect causes of ignition and burned area. The project, which is supported by and run in collaboration with the MSB, also studies risk calculation models and how these correspond with reality. Moreover, it studies the preparedness and resource usage of municipal rescue services in relation to the fighting of grass and forest fires.