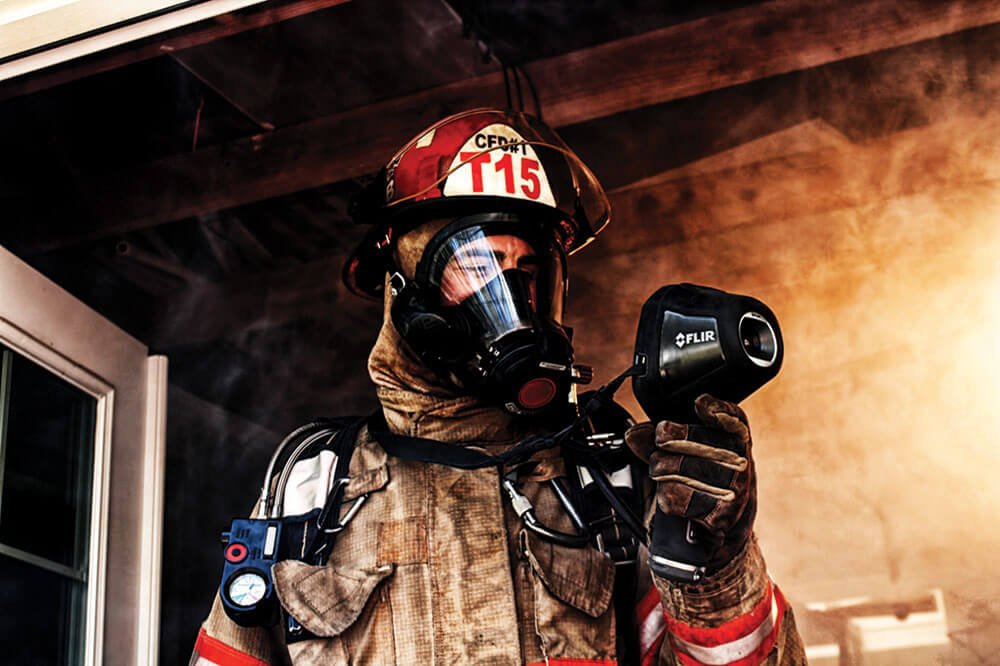 Thermal imaging cameras (TIC) for firefighters used to be bulky, expensive and generally unreachable for small voluntary fire departments, of which the German state of Bavaria has so many. Fortunately, with the latest developments in thermal imaging technology, TICs like FLIR’s K50 camera, have become extremely attractive and affordable, even for small fire brigades. The fire department of the German city of Mhldorf has recently discovered the many benefits of FLIR’s firefighting camera.

The Mhldorf county fire department is a modern and professional team that takes the protection and security of its citizens very seriously. With an average of 3500 interventions per year, the several Mhldorf fire teams are responsible for a primary sector of 107,800 inhabitants, including Mhldorf county, as well as several adjacent communities.

The camera has several different imaging modes that help speed up tactical decisions and the search for survivors.

Looking for wounded and missing persons

Using a thermal imaging camera can be a very efficient way for firefighters to look for wounded or missing persons in places where the view is obstructed, for example in small or closed spaces or when you need to see through smoke.

“A thermal imaging camera like the FLIR K50 can help us save lives,” says Harald Lechertshuber. “Only last week, we had to move out for an intervention and look at a car wreck as a result of a traffic incident. Looking at the car wreck, we were not sure whether there were one or two people inside. After being able to free one person from the wreck, we used the thermal camera and quickly discovered a second person.”

Thermal imagers to look for fires

The Mhldorf county fire department also uses the FLIR K50 to look for fires that are not immediately visible for the human eye. Sometimes when a fire team is arriving at the scene, it can be difficult to see how and where the fire has developed.

“A TIC should not be too complex, certainly not in the stressful situations we sometimes work in. In fact, the operation of the FLIR camera is much easier and simpler than I have seen from any other camera out there in the market.” Harald Lechertshuber

The FLIR K-Series can be controlled by 3 large buttons on top of the unit. Ideal for a gloved fire fighters hand.

“For example in row houses, you cannot always see from the outside in which building the fire is present,” says Harald Lechertshuber. “With the FLIR K50, we can already see from the outside which places are hot and cold and have a perfect overview of the situation.” But also after a fire has been extinguished, a thermal imager can help assess the situation and allow firefighters to look for looming fire remains or for inadequately extinguished fires.

The FLIR K50 produces thermal images of 320 x 240 pixels with a 60Hz frequency and a temperature range from 32F to 1202F (0C to 650C). The camera has five imaging modes that help speed up tactical decisions and the search for survivors.

“The camera image is very stable, has a perfect resolution and the various imaging modes help us assess various situations much better,” says Harald Lechertshuber. “Next to the camera’s price level, what we also value a lot is the user-friendliness of the K50. The camera gives clear temperature readings and the operation is very simple, as it should be with a firefighting camera. A TIC should not be too complex, certainly not in the stressful situations we sometimes work in. In fact, the operation of the FLIR camera is much easier and simpler than I have seen from any other camera out there in the market.”

“The total package of the camera is just right for a fire department like ours. I would not change a thing about it. Even in highly elevated temperatures of more than 250C, the camera keeps on working perfectly. We currently make use of twelve thermal imaging cameras from FLIR in our county. Whenever, we need to do an intervention, we give priority to the closest available team that has a FLIR camera. This way, we are sure that our people get the best firefighting services possible.”

For more information go to FLIR.