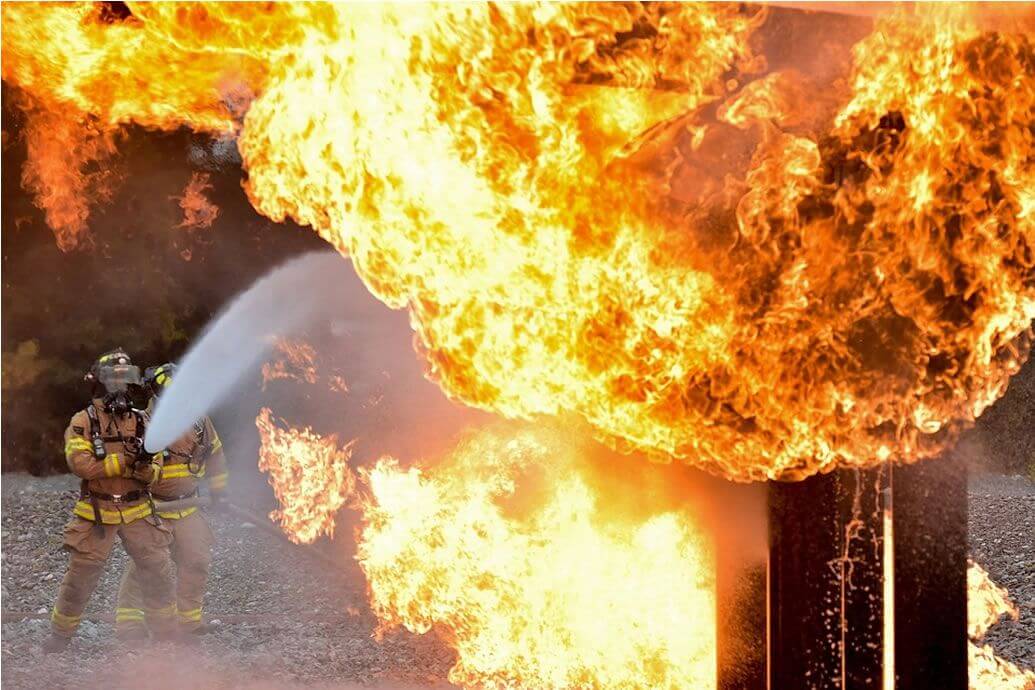 Flashover Part 3 – What do YOU Know?

Again, using images from a 3D Firefighting CFBT simulator (below), what event occurs here when the fire is allowed to smolder for several minutes inside the simulator, before opening a window hatch to allow air to enter and smoke to escape. Is this a backdraft? A smoke explosion? What is the difference between this and the door entry at 1 above? 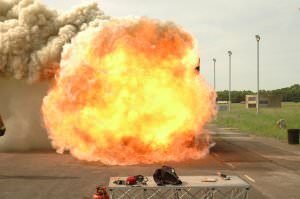 How can we prevent or reduce the chances of such an event from occurring?

The ignition you see above is a backdraft. It clearly demonstrates an ignition that originates inside the fire compartment several seconds after creating an opening. In some cases the ignition is delayed and several minutes might actually pass before the backdraft occurs. The ignition inside the compartment forces a large volume of unburned gases outside where they instantly ignite on meeting and mixing with air. This type of ignition may occur under varying proportions of gaseous pre-mix with air. The percentages in the pre-mix will affect the likelihood of severe structural damage.

In both cases, recognition of the hazards and effective tactical ventilation procedures may assist. Effective zoning of compartments is another strategy used by firefighters trained in 3D tactics in an attempt to deal with such situations. 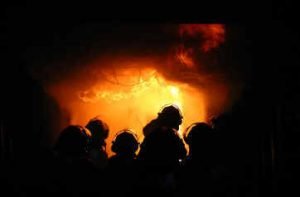 Here (above) our students are observing fire development in a training simulator. At this stage they are witnessing tongues of flame. detaching themselves from the fire plume as it deflects off the ceiling and heads off along ceiling, over their heads. This detachment of flames in the overhead, also known as fire ‘snakes’ or ‘dancing angels’ is typical of the Rollover effect and heralds the onset of ‘flashover. It is at this stage that firefighters need to be taking countering, defensive actions or considering moving quickly out of the compartment to a place of safety.

If the fire is unshielded a direct hit at the base of the flames will gain some knock-down. The gaseous phase at the ceiling may still remain dormant and should also be dealt with. If the fire’s base is shielded then the gaseous fire development should be approached directly, using 3D water-fog applications, penciling and surface ‘painting’ to cool the wall linings.

Two firefighters were killed in this training burn in an acquired structure in Florida when an event of RFP occurred. Subsequent investigations by NIST, which included computer fire modeling and full-scale test burns, suggested that amongst several influencing factors, the most relevant to the ‘Flashover’ that occurred was potentially the venting of a window (shown below). 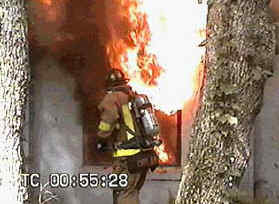 As the window was vented the attack team were reportedly just beginning to apply water into the fire room from a position located in the hallway outside. Inside the fire room were two firefighters carrying out search and rescue tasks, ahead of the hose-line. As the window was taken, white smoke quickly turned to gray smoke and within ten seconds there appeared dark black smoke issuing under heavy volume and increasing in velocity. At 29 seconds after venting, a flame can be seen at the lower right of the window, initiating from inside the room. The picture above is taken at 30 seconds following the venting action.

The RFP event seemed to manifest itself from an interior rich mix of fire gases being brought into their flammable range by large amounts of air entering the window. The ignition may have initiated from the original fire that reportedly had most likely subsided into an ‘under-ventilated’ state. It may also have been an auto-ignition within the room itself. The term (hot-rich) ‘flashover’ might be used to describe this event although ‘thermal runaway’ must also be considered a possibility, where the fire was creating energy (heat) faster than the heat could be released from the window. Interior conditions prior to venting were reported as extremely hot with near zero visibility at the hallway outside the room.

It moves lazily as if in slow motion …. hanging just a few feet above your head …. what is it? What are the dangers here? This is rich-mix gas layer that is igniting along the smoke interface where the air meets the smoke. The smoke is dark and hot and hanging at the ceiling. The air is feeding in from behind you, where the entry point is. As the gases ignite the flaming combustion appears as if in slow-motion to roll gently across the ceiling. 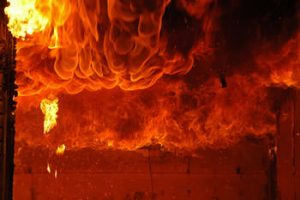 This event is rarely seen and looks almost harmless, but beware! Above that glistening ‘sea of flames’ lay a deep rich mixed super-heated gas layer. Anything that might disrupt it, such as a sudden gust of wind, a misplaced fog stream, or a PPV air-flow, might serve to stir the gas/air mix up and cause a sudden escalation in the gaseous-phase fire. A couple of brief bursts of a well-placed 3D fog pattern will knock this burning gas layer back and maintain the thermal balance.

Example of how the ‘Limits of Flammability’ of fire gases (CO is used just as an example of many) may influence the Fire Gas Ignition (FGI) – an event of Rapid Fire Progress (RFP) (Below) (Note: at fire temperatures, the LEL (Lower Explosive Limits) and UEL (Upper Explosive Limits) widen further still!).

Part 3 of an article written by Paul Grimwood.

Part 1 can be viewed by clicking Flashover – What do YOU know?

Part 2 can be viewed by clicking Flashover Part 2