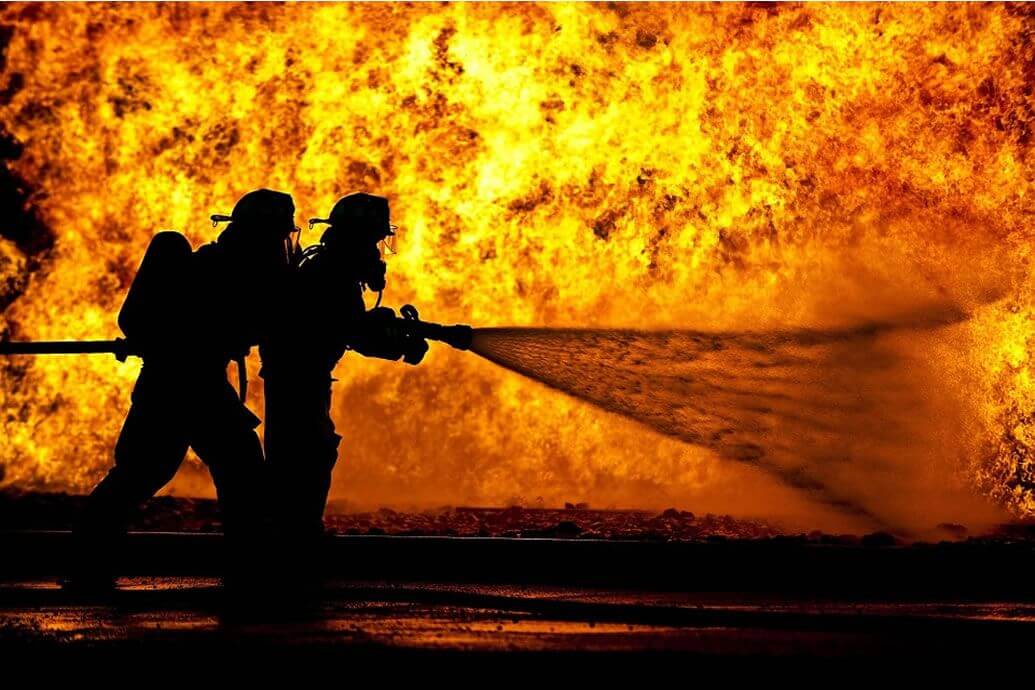 Flashover Part 2- What do YOU Know?

As firefighters turn up they locate the fire a state of smolder. It might be a simple mattress with fire smoldering away underneath (left), or it could be a sofa fire with the fire smoldering deep inside the cushions or structure of it. It could also be a pile of rubbish bags in an under-stairs cupboard that have spontaneously ignited and smoldered! 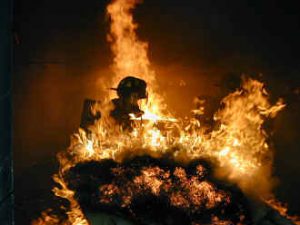 As we raise the mattress what happens?

Now imagine if that flammable smoke layer (at 3 above) from the smoldering fire has dispersed throughout the room or area you are occupying. What might occur here as you uncover the hidden fire? Lift the mattress? Cut into the sofa?

How should we approach this situation?

The lifting of the mattress, or the cutting into a smoldering sofa, allows air to mix with the rich fire gases inside/under the furniture. This may bring a sudden ignition of the gases as they mix with air as they enter the flammable range.

What might be worse is if the fire gases have smoldered into a flammable pre-mix in the room itself. The conditions may be light, hazy and cool but the pre-mix may be ideal! As the initial fire development in the furniture occurs it reaches the room’s pre-mixed gases and Whooompf!

Pre-ventilation before revealing hidden fire is needed in this case.

A recent quote by a County Fire Marshalin August 2007 investigating the LODD of two California firefighters;

“A smoke explosion happens when a large buildup of smoke becomes very hot inside a room, and the whole cloud ignites all at one time,” said the County Fire Marshal. “A flashover is pretty much the same thing without smoke.”

But is this statement true? Well not exactly. The fact it was made as a way of explaining to the media, in simple terms, the differences between ‘flashover’ and ‘smoke explosion’ is acknowledged, but from a firefighter’s point of view …. here are some important points to be aware of ….

What is the relevancy? Well it is relevant to firefighting actions because if firefighters are creating openings that allows air in to feed the fire at the time of the rapid fire development, then it is the venting action that might initiate the RFP. If however the action of firefighters was to a) uncover an ignition source by disturbing debris; or b) ‘push’ a flaming ember up into a flammable smoke layer through inappropriate use of a fog nozzle (for example) or a PPV fan (another example), then a smoke explosion or flash-fire may result.

The countering actions to avoid each event are –

Firefighters arrive to see smoke issuing from the upper floor bedroom window. They attempt to advance a hose-line into the structure from this vantage point using ladder access, but fail to notice the heavily stained black windows on the first (ground) floor level.

Firefighters arrive to see smoke issuing from the upper floor bedroom window. A young child is reported trapped within the room. The front door is open as family members had escaped from this route and the heavy black smoke staining to the glass around the porch suggests a rich mix exists in the gases.

Two firefighters take a hose-line and attempt to reach the child through the bedroom window. The front door is open, there are windows vented on the ‘D’ side and the child’s bedroom window is opened by the firefighters. Tiny streaks of flaming combustion are noted in the heavy black smoke issuing from the front door as auto-ignition begins. Then, suddenly, the windows on the first (ground) floor break through the heat and smoke turns instantly into flame …. what occurred? How can we prevent this? 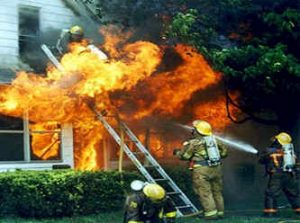 It is always important to check windows around a structure during the 360 deg. size-up. Look for signs of blackening; crazing in the glass; are they hot to touch? So much valuable information can be gained here. In this situation, we must get water on the fire and coordinate the rescue attempt with the fire attack, ensuring a correct and safe 3D door entry procedure is made at the fire floor (as 1 above) to counter such an ignition. As windows are vented and an air-track is initiated, other windows may break …. air flows in …. most probably an auto-ignition Fire Gas Ignition (FGI) as the hot rich fire gases ignite in a hot-rich flashover, burning back into the compartment for sustained burning.

Firefighters arrive on-scene to a commercial or large volume industrial or storage building showing fire in the rear. They make entry through the front but the fire has access to an abundance of fuel and air, and the fire continues to develop in size so rapidly that it escalates beyond the flow-rate available at the nozzle/s and chases them out of the structure just a few short minutes after gaining entry. 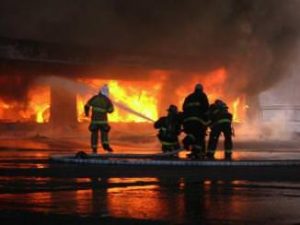 What might cause this sudden development of fire? Can flashover occur in such a large volume area?

The fire dynamics associated with normally accepted definitions of ‘flashover’ preclude such an event from occurring in high-ceiling, large volume structures. What normally occurs here is an accumulation of flammable combustion products and fire gases in the smoke at ceiling level. This smoke may be collecting in a flammable reservoir and may be visible or hidden in a ceiling attic space.

When this layer of smoke enters the flammable range, either from the lean side or the rich side, and sufficient fire or heat energy reaches the smoke layer, a fast developing escalation of flaming combustion will spread across the ceiling. The heat flux radiating downwards will eventually ignite fuel sources at the lower level. This ignition of high level fire gases will most likely occur very quickly, possibly faster than a firefighter can run, and will be preceded by a layer of thick black smoke hitting the floor and reducing visibility to zero. The most intense areas of burning may be at walls as the gases deflect downwards with some high velocity and force, similar to a flame thrower effect. Some have referred to this form of event as a ‘progressive’ flashover. It can equally be argued that this is a form of flash-fire, as described at 3 above, where the smoke layer is igniting – a Fire Gas Ignition.

Part 2 of an article written by Paul Grimwood. Part 1 can be viewed by clicking Flashover – What do YOU know?

Part 3 will be published shortly on Fire Product Search