While there are many organisations that provide food, water and shelter for survivors of disasters, there is not an organisation that provides specialised equipment and experienced staff for the immediate needs of the leaders and members of communities, free of charge, in the aftermath of a catastrophe. Since May of 2007, the First Response Team of America has assisted local fire departments in dozens of communities across the United States in the wake of catastrophe.

The First Response Team of America (FRTA) is a non-profit, team of response workers operating a fleet of highly specialised trucks, gear and equipment that provides immediate emergency aid, free of charge, to areas hit by disasters. Its goal is to arrive in the crucial moments following a catastrophe, and its mission is to reduce the time it takes for help to reach those in need – joining local first responders in saving lives and restoring hope. Too often, communities are left on their own to respond to a disaster because the resources necessary for rescue and recovery – equipment, tools and personnel – are damaged, inaccessible or unavailable.

FRTA studies weather patterns and communicates regularly with top meteorologists from The Weather Channel to track movement of the worst storms to anticipate when and where the next disaster may strike. Our fleet is pre-positioned for immediate response along storm-prone regions, and deployed immediately to the affected community once alerted of a strike, providing a needed service and filling in the gap that often exists between a storm strike and humanitarian aid response. With the help of The Weather Channel, FRTA arrives at most any disaster within the first few critical hours.

Upon arrival to a community, FRTA first identifies the local leadership charged with the response efforts, generally local municipalities and fire departments, and reaches out to them to offer its personnel and equipment. One of the realities of disasters is that the community’s police, fire, emergency response and health care resources are damaged or even wiped out. Additionally, the unpredictability of when a disaster might occur prohibits the communities from spending the money for resources that are vital after the disaster. 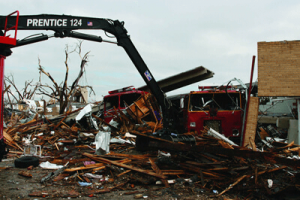 Fire departments perform essential functions in the community, and particularly during the immediate stages of a disaster. But 86 percent of fire departments in the U.S. are made up of volunteers and only have the arsenal of tools and equipment for fires and car accidents. Even more, the resources and equipment of the fire departments are so often completely destroyed, leaving them without any tools to perform their jobs effectively and be first responders to their neighbours in need. Local municipalities, also crucial in a community’s recovery, generally provide maintenance support for snow and garbage removal, and road repair. When faced with a large-scale disaster such as a flood, hurricane, tornado or earthquake, these first responders do not have the resources to respond to those in need. The First Response Team delivers unique and specialised equipment in these initial hours, and augments the resources of local responders, expediting the response, saving more lives and jump-starting recovery.

FRTA opens critical roadways blocked by debris and power lines so fire trucks, ambulances and other agencies can move into the area with less risk; provides temporary power solutions using industrial generators and light towers to restart and mobilise critical service centres such as emergency rooms, nursing homes, shelters and critical first responder centres. FRTA also provides light towers and search and rescue gear to identify where victims are in the rubble.

Greensburg, Kansas Tornado and the Birth of the First Response Team

Before creating the First Response Team, I was the owner of a lucrative business conducting large-scale disaster recovery and clean-up, one or two months after a storm. But I often wondered what happened to these communities on “Day One” of a disaster. After seeing the devastation of New Orleans caused by Hurricane Katrina and similar travesties, I thought there must be a need for an emergency response organisation using heavy equipment in the aftermath of these disasters.

When a tornado is so powerful that it throws homes, tractor-trailers and commercial buildings through the air and drops them on roadways, who moves that debris? How do ambulances and fire trucks pass through the rubble to access people in need? If the whole town is destroyed, including all the equipment in the local municipality and fire department, what do they do to simply open up roads? What chaos, confusion and despair must there be? What is it like in the first few days and the first few hours? What happens in that first night when communities have lost everything? Could I help then? I decided to find out. 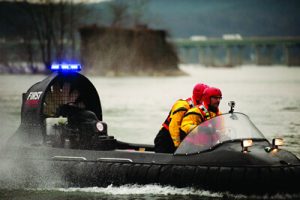 In May 2007, Greensburg, Kansas was struck by an EF-5 tornado. I decided to deploy my equipment to Greensburg, and see what was needed on that first day and that first night. When I arrived, I was introduced to a local police officer, and showed him my large Prentice crane truck equipped with a specialised hydraulic crane head. I explained that I could help open up roads. But nobody was being allowed in Greensburg at that time and every road was barricaded. But something kept me going, and I decided to continue into Greensburg until I hit the first roadblock.
I pulled up to a fireman who was standing in the middle of the road. After seeing my equipment and having a short dialogue with another gentleman on his radio, he instructed me to pull over to the side and wait until the man in charge could come out to meet me.

As I waited and the sun began to rise, I saw what I had never had the opportunity to see before – a community that had just experienced the wrath of Mother Nature. I was able to see in front of me what was left of this small country town. As far as I could see, everything was virtually levelled and whatever was still standing was beyond repair.
Moments later, I was introduced to the Public Works Director of Greensburg, and I explained that I was there to help and wanted to open up roads free of charge. Despite his hesitation that it was really for free, he explained he needed help clearing a path to the firehouse so that the firemen could access what was left of the firehouse. I agreed to do whatever he needed. We shook hands; he pointed toward the direction where the firehouse used to be and wished me luck.

I could not believe what I saw that morning. Fully loaded tractor-trailers were blown from across town blocking roads and huge steel I-beams were intertwined with building debris, blocking intersections. Just a few hours later, I cleared the debris leading to the bumper of the fire trucks. Concrete I-beams weighing thousands of killogrammes had pinned both of the trucks down. The firehouse and trucks were destroyed and beyond repair. The fire chief was standing by as I made my last dig with the crane. The firemen were able to access their destroyed trucks and recover important tools and equipment they would need to help their devastated town. I also assisted with the clearing of roads, and the retrieval of vital records and documents from the bank.

I was so distracted at the tasks at hand that I did not have time to look around me and take it all inuntil a woman walking through the rubble right in front of me collapsed. Two others who were walking nearby came to her aid. As I sat there atop my crane looking down at this woman, and then looking at the devastating destruction as far as I could see, I realised I was no longer going to use my equipment to come in two months after a disaster to make money. Instead, I was going to utilise all that I had built over the years in business to be there on Day One and through those first few critical days and weeks to help communities get back on their feet.
I began to take notes on other equipment that I would need to add to my fleet for the next time I responded to a disaster.

The FRTA team’s fleet is led by four trucks, donated by Peterbilt and The Pete Store, as well as three RAM trucks provided by RAM Corporate, many of which are powered by Cummins diesel engines. They house every tool and resource needed to respond to any type, size and scope of natural disaster, including a Caterpillar generator capable of powering a health care facility or other shelter, water pumps for clearing out essential buildings or low-lying areas of the community, a light tower for assisting search and rescue and for other operational or security tasks, and communications capabilities in the case of damage to local services.

For life saving, FRTA has hovercrafts, search cameras (infrared, rubble, underwater), and personal rescue apparatus including wet suits. When the need is to recover people from fallen buildings or other debris, also available are a plasma cutter, torches for metal cutting, a concrete saw, various wood cutting apparatus, provided by Stihl, welding equipment and compressed air. For debris removal, there is a custom-built truck, trailer and crane configuration specifically designed to move large volumes of debris. Obstructions on roadways blocking police, fire and emergency health vehicles can include entire houses, trees, vehicles and all manners of commercial and personal property. In addition, Caterpillar compact track loaders provide the versatility to provide access in a wide variety of locations.

Starting the recovery of the community utilises all of the same equipment mentioned. At some disasters, this equipment has been deployed before the disaster in an effort to prevent damage. Until the other response agencies are on-site and prepared to assume their responsibilities, tasks such as enabling residents to return to their homes, opening thoroughfares, and even clearing parks for children to be able to play have the remarkable ability to affect the morale and reduce the feeling of helplessness of a community.

All of this equipment arrives as a unit, with 2,650 litres of diesel fuel, with an extensive inventory of parts, tools and equipment to be self-sufficient for several days with repairs and fuel.

Since that first storm in Greensburg, Kansas, the First Response Team of America has responded to 52 large-scale disasters across the United States and Haiti. The organisation’s goal is to be there for our neighbours in need, in the immediate wake of disasters, and jump-start recovery. We are committed to saving lives, assisting local fire departments and municipalities, and working hand in hand with our neighbours to pick up the pieces. But we cannot do it alone.
We need help to continue the work of the First Response Team, and help local fire departments and municipalities be heroes for their communities. We have the support of major companies like Peterbilt, The Pete Store, Caterpillar, Lowe’s, Ram Trucks, and others to be there on Day One, but we need others to join their efforts so that the First Response Team can be there for our neighbours in need when disaster strikes, and help local first responders, the real heroes, help their community get back on their feet.