Fires are Common in Buses 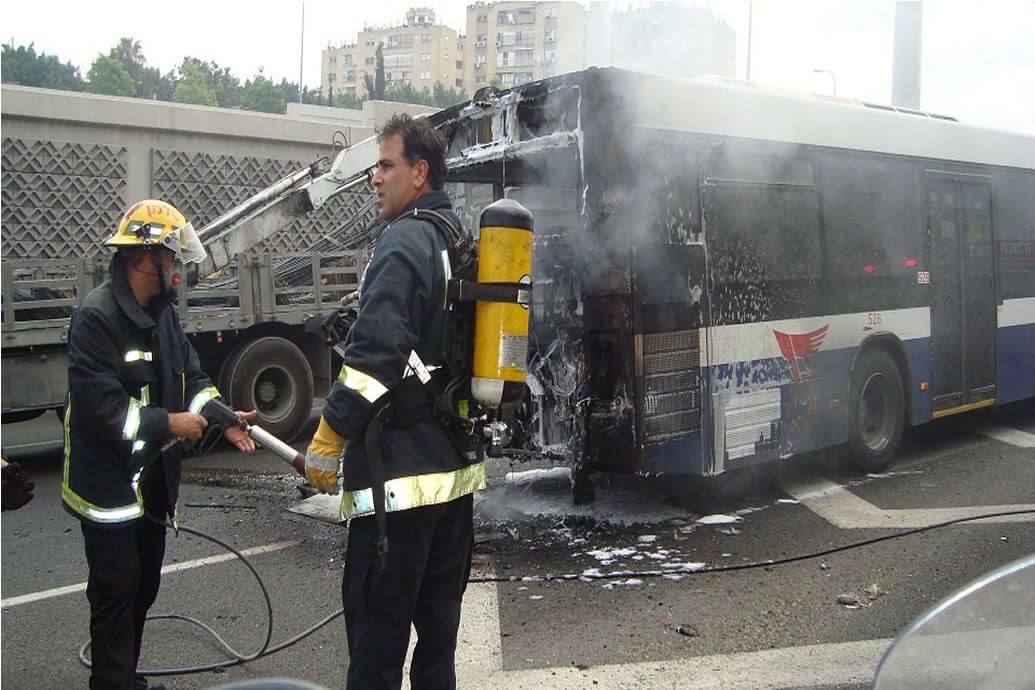 Fires are common in buses and some of these fires have serious consequences.

About 1 % of all buses suffer some form of fire incident each year. A recent example of a tragic accident is that of the bus fire near Hannover in November 2008, when 20 persons died, making it the worst bus accident in Germany for 16 years.

The results from a large project investigating bus fires were presented at the FIVE conference on 29th-30th September in Göteborg. The work has been carried out by SP Fire Technology on behalf of the National Road Authorities in Norway and Sweden. 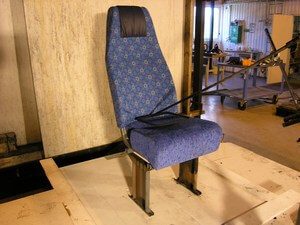 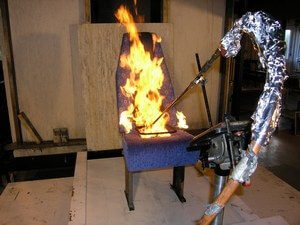 A fire test on a bus seat. The results were used to compare different test methods and to provide input data for computer simulations of the progress of the fire.

The following is a summary of the main parts of the project, the overall objective of which was to investigate the fire safety of buses and to produce recommendations for improvements.

– Statistics of bus fires in Norway and Sweden. The investigation covered bus fires between 1996 and 2004.

– Fire risks in buses. This area of the work identified specific fire risks and how they are affected by design, maintenance and cost considerations.

– Test method for firewalls. The work developed a proposal for a test method to test the fire resistance of the firewall between the engine compartment and the passenger space.

– Fire simulations. Computer simulations were run in order to investigate the spread of smoke inside a burning bus. The results from these simulations can be used for such purposes as investigating evacuation behaviour.

– Full scale trials. A complete bus was fire tested in SP’s large fire test hall. Measurements were made of parameters including the heat release rate and the production of smoke and toxic gases.

– Summary and proposals for improvements. The project was summarised, and proposals for new test methods and requirement standards were put forward. Parts of these proposals are now being considered by the UN Working Group on General Safety Provisions (GRSG) in Geneva.

The full scale trials showed that once flames had reached the passenger space, flashover would occur within a short time. Current requirements for interior materials require them only to pass a simple horizontal spread of flame test (UL xx FMVSS XX). This is clearly insufficient, as even materials with poor fire resistance can be approved. The requirements for trains and passenger ships, for example, are considerably higher. SP has been engaged internationally and, as a technical expert, has presented proposals for better test procedures for these materials. 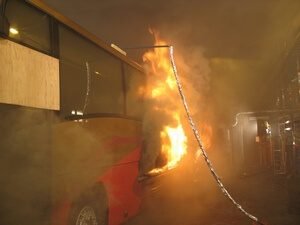 A full scale fire test on a bus. The pipe from the roof is a sampling line for gas measurements.

Statistics from the insurance sector show that the number of total loss cases of fires in buses can be reduced dramatically by the introduction of requirements for fire extinguishing systems in engine compartments. The commonest form of fires on buses are those that start in the engine compartment. SP is therefore preparing an international test standard that can be used when specifying requirements for the efficacy and function of such systems. This work is being carried out on behalf of the National Road Authorities in Norway and Sweden.