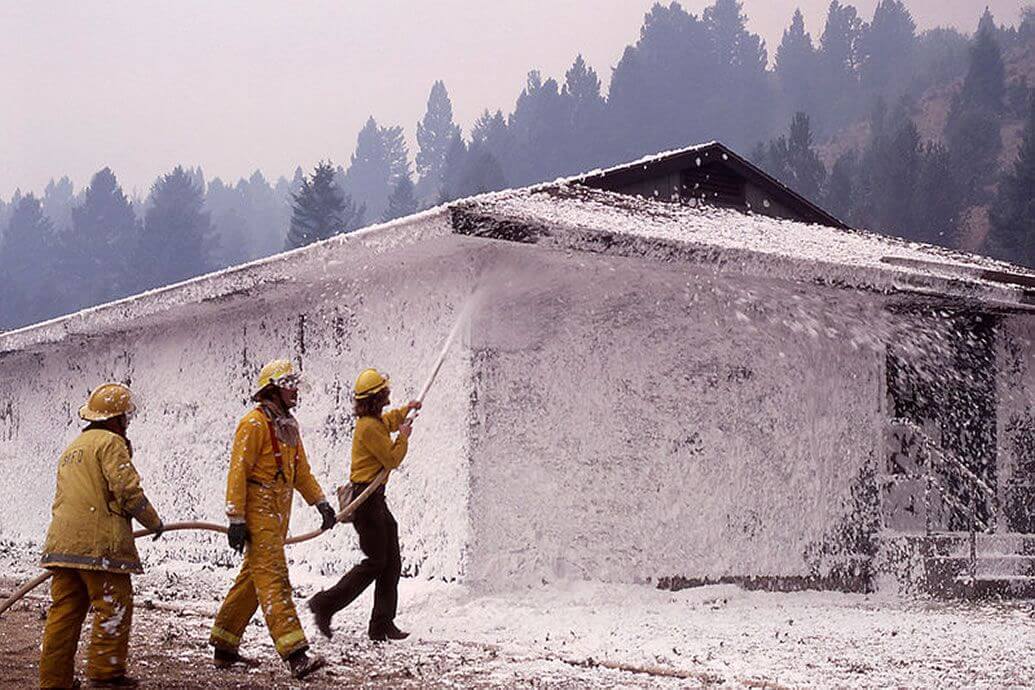 The use of Compressed Air Foam Systems (CAFS) in the rural setting undoubtedly offer great benefits, as do regular Class ‘A’ foams, for their penetrating and protective qualities. However, we are now finding ourselves facing an in-depth strategic review concerning our approach to structural firefighting where it has been shown that fire attack systems providing foam/air additives can assist firefighters greatly. A vast reduction in fire ‘knockdown’ and suppression times are being seen and the transition to lightweight attack hose-lines, where the air content creates a line that is half the weight of a normal water line, means firefighters are finding it much easier to advance and operate.

There has been a vast amount of research over the past ten years that focused on the ability of CAFS foam and air firefighting systems to suppress Class ‘A’ fires and it is beyond doubt that a tiny amount of foam additive entrained into a water/air mix clearly outperforms plain water in suppressive performance. 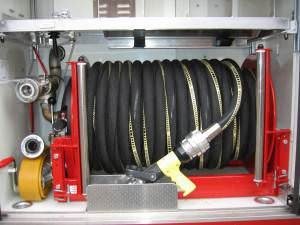 33-35mm I/D High Visibility CAFS Reel with Luminescent striping and directional markers that denote the ‘way out’ actually glow in the dark.

The use of CAFS as a primary fire attack tool was proposed in the UK in 2005. The East Sussex Fire & Rescue had two years experience of operational trials in structures. They have several front-line fire engines equipped with the German Schmitz GmbH ‘One Seven’ system and other brigades across the UK are fast following their innovative approaches. The overall concept is being driven from hierarchal chains of command who see an opportunity for a simple system of primary fire attack that may well replace the high-pressure water-fog system. Such a system appears to offer increased performance in fire suppression of post-flashover fire and possibly pre-flashover situations. It proposes that less water is needed to suppress a vast majority of fires and therefore primary water tanks, and fire engines, can become smaller, possibly needing less firefighters, where attacks on the fire can be made from a safer distance. Further still, the costs associated with training firefighters in primary fire attack may well reduce substantially. 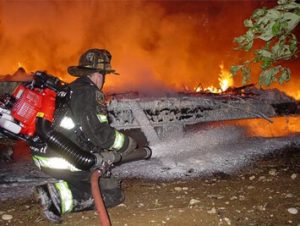 In 2006 Merseyside Fire & Rescue undertook trials with CAFS on two engines for trials following some live burn trials in abandoned buildings. The Merseyside report on these trials promote several major benefits of CAFS as follows –

– It has a significantly longer throw than that achievable with fog attack, enabling crews to maintain a greater distance from the seat of fire whilst firefighting. As a result the fire compartment can be cooled and fire gases inerted from a greater distance often even from outside the fire compartment itself. This reduces the potential for injury to crews from radiated heat or flashover.

– Unlike water, Compressed Air Foam applied to ceilings and walls remains in place and continues to absorb heat from fire gases until all water within it has been vapourised. This has the effect of slowing fire growth and once applied, CAF slows fire burn back by up to four times compared against water fog.

– CAF does not cause temperature inversion when used in the fire compartment, but instead causes a significant and immediate drop in temperatures at the lower levels of the compartment, improving conditions for firefighters and casualties.

– The reduction in the amount of water used reduces steam produced, whilst still achieving rapid cooling; this causes the neutral plane within the compartment to raise creating better visibility. Often there is a significant loss of visibility when using water fog as the neutral plane is pushed down.

– Techniques for search and rescue and initial attack onto fires in small/medium properties can be improved immediately by using CAF (subject to DRA) as it allows the fire to be attacked earlier, teams to operate above the fire more safely, and searches to be conducted more efficiently. This is due to its longer throw, the reduced amount of steam produced by it, its significant impact on fire development once “painted” onto ceilings and walls and its effect of raising the neutral plane in the compartment. 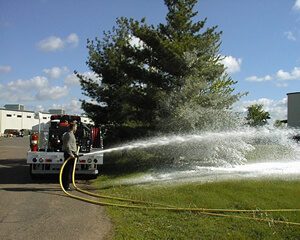 – CAF can be used to control suspected backdraft and flashover conditions in a similar way to fog techniques and again has advantages over fog techniques as the process of inerting fire gases can be conducted further away from the opening and can penetrate further into the compartment than fog attack.

– Required branch techniques for use of CAF are markedly different from fog attack techniques and thorough practical training will be required to ensure competence of operational staff required to use it. Our training centre personnel and Wallasey firefighters, who have undergone instructional training from ‘Boise Interagency fire cover,’ can deliver the training. ‘Boise Interagency fire cover’ is a company based in Seattle USA, who provide the only validated instructional courses in CAFS in the World.

The transition to CAFS for interior firefighting applications has its appeal – it means we can work at long range, for the reach of a CAFS firefighting stream is six times that of a fog pattern. There are even false assumptions that CAFS attacks may replace the need for Positive Pressure Ventilation (PPV) as initial attack may be applied from the exterior. CAFS decreases the surface tension of water to optimise cooling, however although it has been stated that CAFS offers twice the cooling rate of plain water – CAFS DOES NOT increase water’s ability to absorb heat. CAFS covers and penetrates surfaces far more effectively than water but when applied from long range CAFS does not deal with the gases in the overhead! Any total transition to CAFS for compartmental or interior firefighting demands we re-assess our approach and neglect those gases that have caused so many firefighter deaths over recent years.

CAFS streams are (most effectively) applied through dedicated smooth-bore nozzles. When combination fog nozzles are utilised the effect appears to ‘strip’ much of the air from the bubble structure and produce something more similar to a regular class ‘A’ foam stream. Such a stream, applied in a fog pattern, will produce smaller droplets as the surface tension is reduced. These smaller droplets will have mostly good effects in the gases but may evaporate closer to the nozzle operator. It is understood that such a stream is only slightly more effective, if at all, than plain water at cooling and inerting gas layers.

Research has demonstrated that the benefits and advantages associated with CAFS in un-shielded post-flashover fires involving open-plan areas are countered when the fire is pre-flashover involving a ‘shielded’ area that is perhaps partitioned or sectioned throughout. What if the fire is in a room at the end of a long hallway with heavy amounts of gases, smoke and heat filling the hall; or perhaps there is a smoke reservoir banking down at the top of a stairway, filling the overhead with flammable smoke. How can a CAFS stream in smooth-bore form take control of such a hazard that isn’t yet on fire? You cannot ‘coat’ the gases with foam from a straight-stream! CAFS is undoubtedly effective on the post-flashover un-shielded fire and the rapid knockdown effects have been frequently demonstrated.

The use of CAFS applied in pulsing fog patterns has not yet been compared against pulsing water-fog in the research to date. It is apparent that CAFS offers rapid knockdown when applied in straight stream form and enables the fire attack to be mounted from a safer distance and sometimes from an exterior position. The use of CAFS on post-flashover unshielded fires has undoubtedly been proven more effective than a direct attack from a plain water stream and ensures the minimal amounts of water carried on first-arriving fire engines is used to much greater effect. This can be most useful to firefighters when using water direct from tank supplies prior to connecting to a hydrant system or open water supply.

The use of CAFS from an interior position has yet to be proven more effective than pulsing water-fog patterns in gas cooling applications. Therefore any reversion to direct fire attack streams on an interior approach route that, in turn, results in neglect of the forming fire gas layers that have been responsible for the loss of so many firefighters lives may be a mistake. It is considered that a pulsing fog pattern from a simple class ‘A’ line may offer greater potential than that of a CAFS equivalent when hose-lines are advanced inside fire-involved structures, especially where the fire remains in a ventilation controlled and shielded state.

More information can be found at www.Firetactics.com