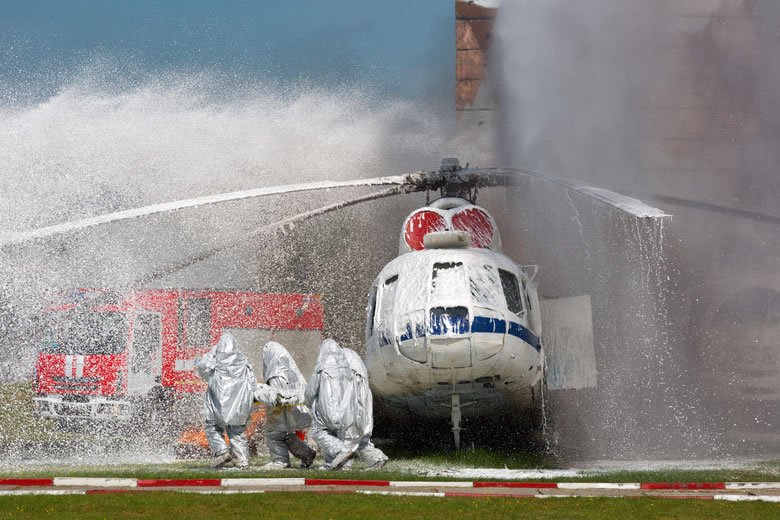 Firefighters are trained to risk their lives every day, working in high-stress conditions, with numerous risks that could arise. Considering this, the irony that comes with the discovery that it is actually the firefighting foam which could pose the biggest health risk is undeniable and it is a subject that needs to be addressed more in-depth in order to raise awareness about the health risks linked to PFAS exposure, especially during this difficult period when it could put former firefighters in the most vulnerable category for getting infected with the novel coronavirus and potentially developing severe complications.

Aqueous Film Forming Foam or AFFF for short is a fire suppressant that has been used in all U.S. firefighting facilities since its invention in the 60s. This type of foam was meant to put out oil fires that can lead to fire hazards by coating the fuel and preventing its contact with oxygen. It was developed by the US Navy and has been largely used by civilian and military firefighting crews not only for fire emergencies but also at training facilities. Among the ingredients that make AFFF efficient, there are PFAS, a group of man-made chemicals that are highly resistant to typical environmental degradation processes, have the ability to easily travel great distances in soil and water, and once exposed, the human body cannot easily eliminate them, which is why they are also being called “forever chemicals”.

Despite the fact that AFFF is highly effective, there are numerous health risks associated with it including various types of cancer. For a very long time, these risks remained unknown to the general public as well as to firefighters, despite the fact that there have been some studies alleging a link between exposure to PFAS and various health issues. In 1980, an article mentioned the findings of some industry-sponsored studies which showed that monkeys exposed to PFAS have developed microscopic lesions in bone marrow, spleen, and lymph nodes. This internal study was eventually shared with the EPA in 2000 but by then it was a little too late as these chemicals have already exposed many firefighters. Over the last years though, scientific literature on PFAS exposure has evolved, bringing to light new information about the potential health risks.

A study conducted in 2015 at the University of Queensland, found higher concentrations of PFAS chemicals in firefighters’ blood than in the blood of the general population. Although the issue of PFAS chemicals has been in the public attention in the last years and the fact that it can seriously impact the health of those who have for many years consumed the contaminated water at military bases, it is undeniable that firefighters have a much higher risk of developing serious health issues as a result of constant exposure to high amounts of PFAS through working with AFFF.

Health organizations such as The Center for Disease Control and Prevention, American Cancer Society, and the EPA have discovered that some types of PFAS can seriously impact the normal functioning of the immune system and consequently increase the risk of cancer. Recently, the EPA classified these chemicals as ’emerging contaminants’, which means that the health hazards arising from AFFF exposure are significant. PFOAs, which are the most common type of PFAS chemicals that can be found in AFFF have been classified as a potential carcinogenic to humans, based on evidence of bladder cancer from studies in factory workers and firefighters exposed to PFOA. The types of cancer associated with exposure to AFFF are:

The biggest issue is that firefighters were never told about the health consequences of using AFFF and despite early internal findings of its toxicity, there wasn‘t much of an effort made to stop it from escaping into the environment. With years of exposure, PFAS has accumulated in the blood and body of many firefighters, family members, and people living near military bases.

As a result, many people have developed cancers, especially testicular cancer, and could still develop serious diseases over the years to come.

Firefighters And the Risks For COVID-19

Very often, diseases that can arise from PFAS exposure may not even show any symptoms until they are in advanced stages. This is why especially in the context of the COVID-19 crisis it‘s extremely important that former firefighters who have been heavily exposed to these toxic chemicals regularly check up on their health.

Aside from the development of serious diseases such as cancer, which automatically might put former firefighters or other workers that have been exposed to PFAS in the vulnerable group for the infection with the novel coronavirus, these chemicals can also impact the body‘s ability to fight off infections such as common colds or gastroenteritis. New studies suggest that PFAS exposure might seriously damage the immune function, lower vaccine effectiveness, and entail a greater risk for autoimmune diseases. A review of PFAS immunotoxicity conducted in 2016 discovered that exposure to PFOA and PFOS, which are used in AFFF has suppressed the antibody response of the animals being tested, which has strengthened even more the links between exposure to these chemicals and a weakened immune system.

Some studies point to lower resistance to common infections and diseases that attack the immune system as well as a decreased response to the flu or anti-tetanus vaccine. Taking this into consideration, it is important that former firefighters and others who have had prolonged exposure to PFAS keep a close eye on their health especially during this period and try to take all the necessary methods to avoid getting infected with the novel coronavirus, such as social distancing, regularly washing their hands and avoid touching their eyes, mouth or nose.

What is Being Done Regarding AFFF – PFAS Exposure for Firefighters

While studies regarding the health effects of PFAS exposure are still ongoing, the EPA has started taking measures ever since 2006 to eliminate these chemicals from products such as AFFF and find solutions to clean the water supplies near military bases that have been contaminated. Although PFAS are no longer made in the U.S., they could still reach the country through foreign distributors in certain types of products. To this date, the EPA has still not enforced limits on the levels of PFAS in drinking water but has established health advisories at 70 parts per trillion.

The military has also started to replace the old firefighting foam at all their facilities but the current alternatives still contain some types of PFAS chemicals for which there are no known health risks. Hopefully, they will eventually find an alternative that is environmentally friendly and safe for human health.

Another important thing to note is also the fact that since the health risks associated with PFAS has come to light, many lawsuits have been filed against AFFF manufacturers, holding them accountable for failing to warn firefighters and the general public about the health risks. 3M, the company that has manufactured AFFF is the main name being accused of not only putting the lives of firefighters and other workers at risk but also for conceiving information regarding the significant risks to human health.

3M, the company that has manufactured AFFF is the main name being accused of not only putting the lives of firefighters and other workers at risk but also for the contamination of drinking water supplies and for conceiving information regarding the significant risks to human health.

Gregory A. Cade is the principal attorney at Environmental Litigation Group P.C. He is highly dedicated to helping victims that are suffering as a consequence of PFAS exposure, while also advocating for the Alabama community in the fight with environmental toxic exposure.