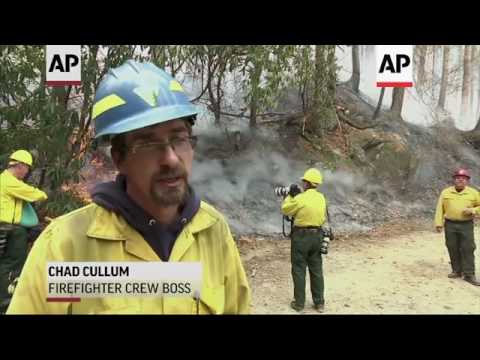 Firefighters Fighting Georgia Wildfire knew the thick smoke that settled over the mountain towns of Rabun County is a constant reminder of the massive wildfire burning at the edges of several small communities.

The fear is that fire will devour homes in its path. Tiger, Clayton and other Rabun County communities in the rugged southern Appalachian mountains of far northeast Georgia are near the epicenter of forest fires burning across the South.

Large wildfires out west often burn in the tree tops, but many of the southern fires cling to the ground.

And here in the north Georgia mountains, the fire doesn’t sleep. Unlike many of the wildfires in western states, it spreads through the night.

The urgency of holding the fire back is not lost on these Firefighters Fighting Georgia Wildfire, as the narrow forest road acting as a barrier is, for now, is about 250 yards from a farmhouse across a pasture.

A few days ago, townspeople began bringing donations of water, cough drops and other supplies to to be sent to firefighters on the front lines. Tim Free, who has lived here all his life, breaks down with emotion as he describes what it’s like to live in a community under siege from wildfires.