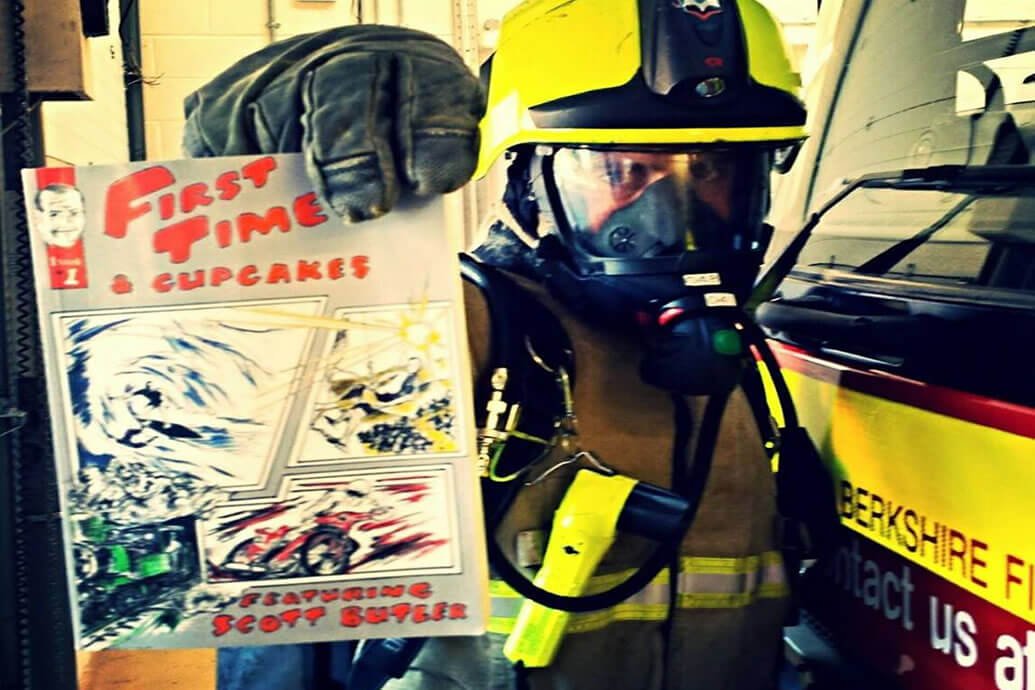 Firefighter Scott Butler serves with Royal Berkshire Fire and Rescue Service. Just one firefighter, hungry for the next challenge. This next challenge happens to be a World Record breaking attempt to be the first to row across the 750 mile length of the Black Sea from west to east. However, in order to get there he has decided to cycle 1800 miles all the way through Europe, west to east. He will set off on this journey on 29th June. However, the eastern coast of the Black Sea will not be his destination; after the row he is set to climb the highest mountain in Europe, the Mount Elbrus. Why this mountain? Scott simply says that it interests him precisely because Elbrus is Europe’s highest mountain, and that he is looking for something different. The row across the Black Sea was chosen before Scott even found out that he would be in for a Guinness World Record.

As it happens, Scott has never rowed across sea before, so it will be an incredible accomplishment for an amateur rower. The Black Sea has some of the biggest shipping lanes in the world. Combine that with the geopolitics and tensions in the surrounding region for example Russia – Ukraine, and you have some possible reasons why nobody has done it before.

Scott tells us his main aims for the trip include climbing to the summit of the 5,642m Mount Elbrus, but he also has another relatively straightforward aim. He wants to cross many country borders, and to see many interesting parts of Eastern Europe during the cycling part of the journey.

Scott mentions three major inspirations for this challenge. First of all, he is trying to prove that he is as fit as ever. Taking on this challenge would certainly succeed at that if nothing else. As a firefighter he has had to stay in peak condition throughout his career, but this challenge is about endurance, and it is hard to imagine more physically demanding tasks.

The next inspiration comes from Scott’s idea of doing something every day for a year, which he wrote a book about. For him this challenge is the obvious next step because it is not only a longer challenge but also incredibly different and varied compared to all other challenges he has tasked himself to take up.

Scott is also inspired to make money for charity. The charities he has chosen to donate the money to include MS Society. This is a very personal cause for him because his father-in-law has suffered from MS for a number of years. The others are Facing Africa, an inspiring cause for Scott, and The Fire Fighters Charity, who’s work he sums up very nicely on his website: ‘The people left behind are not forgotten by the brothers and sisters of the Fire Brigade’.

It is no wonder why the physical and mental strength that a firefighter builds up in their training and career would be seen as an advantage in undertaking such a challenge. But how exactly has this prepared Scott and advantaged him for the journey to Mount Elbrus? As well as the physical fitness that a career in the Fire Service has given, Scott says that as a firefighter he is used to seeing unsavoury sites and that this has prepared him mentally for even the toughest situations. On top of this, team spirit drives him on every day at work, and that drives him on to succeed. After all, Scott is not working alone to prepare and make the journey a success, but with his friends and supporters around him. Nor is he accomplishing the challenge just for himself. He wants to send out a positive message about the fire service in general, and how it continues to strive for excellence and stay in peak condition for the sake of the public who depend on it every day.

How daunting is this challenge compared to what he has done previously? Scott tells us that he doesn’t view the challenge as daunting in the way others would think. He sees it as a series of tough tasks that he can and will overcome as long as he prepares well. Scott believes that whilst he is out on his own at sea or on his bike he is only faced with physically overcoming the next hurdle in contrast to other types of challenges he has faced, in particular being Best Man twice. On the other hand, he believes that the thought of being out in middle of sea entirely on his own will be most challenging. However he tends not to think about it negatively.

How does Scott prepare for the journey now? He says that the main challenge for mountain climb is altitude acclimatisation, and he has been using a special chamber in Reading to prepare for higher altitudes. He will also spend the weekend before he starts the journey in the mountains of Scotland. In a typical day he does 2 to 3 training sessions to get fit. One of the big challenges in this preparation period is having to juggle the physical training with all the paperwork and getting sponsorship sorted.

As a firefighter Scott is used to big challenges in his life, but what makes this challenge special is all the motives that drive him on and will continue to drive him on across Europe, in the boat and up Mount Elbrus. It is clear that the physical challenge may not be seen as more important than the story behind it all. Scott is a fully admirable man for many reasons, but the most striking lesson from this is his enviable attitude to life, and the selflessness of his motives. This is summed up best when we think that he didn’t know he could break a World Record when he first mapped out the journey.