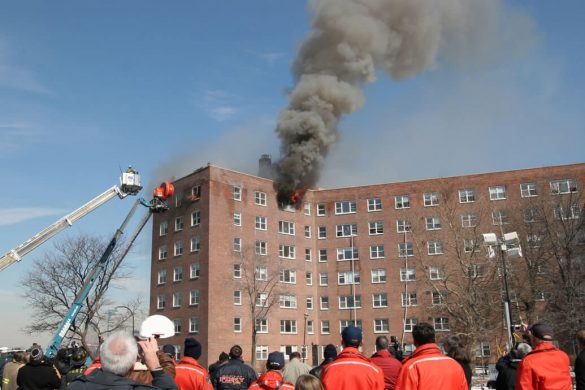 The fundamental principle of fire ventilation is to actively attempt to change the pressure conditions prevailing in a burning building with a view to releasing fire gases. The work methods, the choice of them, and the tactical structure of the fi re and rescue operation depend on the objective and purpose of the measures.

Objective and purpose of gas ventilation

The objective of fire ventilation is to release heat and fire gases into the open. Depending on the type, configuration and implementation of the operation, this serves several purposes. We use fire ventilation to: 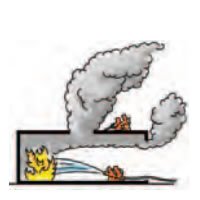 Fire ventilation can have several purposes, for example to reduce the effect of smoke and heat on trapped people and to improve working conditions for the fire fighting crew.

Fans are also used on various occasions. This would imply that fire ventilation is not always a clearly defined task, and that focusing on the implementation of such a measure can therefore be misleading. For this reason a clarification of the different implications of the measure can be in order.

Openings can be made on the basis of the following initial conditions, which can all be described as fire ventilation:

Venting of a room exposed to fire
This is the type of operation normally associated with the concept of fire ventilation.

Venting of adjacent rooms
This is often done in connection with separations or conceivable lines of containment. This type of fire ventilation can fulfil at least two functions: 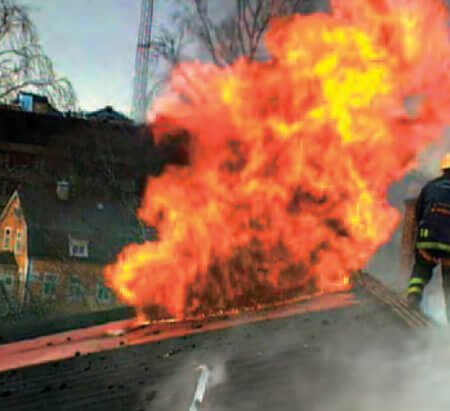 Openings to gain access to a fire that has spread into the structure, for example in the walls or floor structure.

This resembles and is therefore often confused with “venting of a room exposed to fire” and “venting of adjacent rooms”. It is often implemented in connection with roof fires, or fires in concealed spaces that cannot be reached in any other way. The intention is in the fi rst instance to gain access to and suppress the fi re inside the structure, not to vent out smoke.

All these initial conditions fall under the collective concept of fi re ventilation, since in the course of the practical work in fire and rescue operations they bear similarities or are implemented side by side with each other in various ways. There are, however, significant differences between them in terms of what is to be achieved by the measure in question and how the fire is affected, which in turn affects the continuation of the operation.

Horizontal fire ventilation
This is where the outlets are on the same level as the fire, so that the fl ow of fire gases takes place horizontally. This would be the case, for example, in apartment fires or in certain types of industrial buildings where it is difficult, or in fact impossible, to create openings in the roof and where there are no skylights or vents. 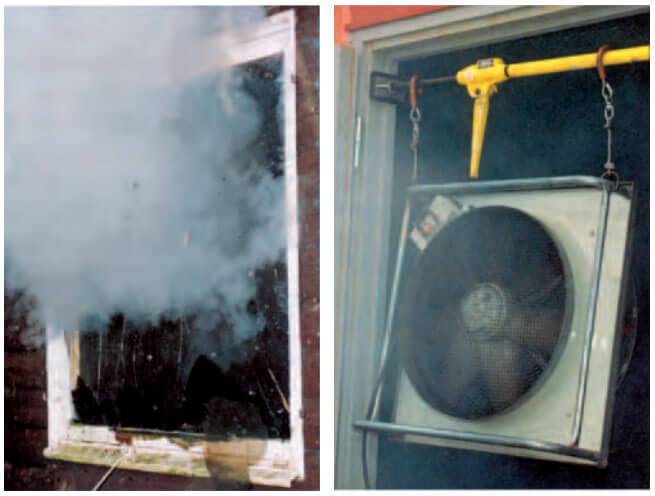 Vertical fire ventilation
This is where the outlets are above the fire, often as high as possible in the building so that the fl ow of fire gases takes place vertically. The outlet is normally implemented by making an opening in the roof structure, or by using existing vents (windows/apertures or vents/shutters).

It would be the same thing to say that very often a fully developed fire can be avoided, or at least delayed. Combined with powerful and rapid suppression measures, this results in quicker and more simple extinguishing. The spread of the fire can be more easily prevented and therefore the damage caused by the fire can be better contained.

Fire ventilation should be implemented as soon as possible during the fire and rescue operation. It is often of critical importance for the outcome whether the fire is fuel controlled or ventilation controlled, along with the coordination of other measures.

Fire ventilation at a later stage, when the fire is ventilation controlled, often means that it is more difficult to implement internal suppression. In closed areas the fire scenario can accelerate violently when air gains access to the fire as a result of fire ventilation, in particular if the fire has been underway for a prolonged period in the closed area. The intensity of the fire can increase, the fire spreads more quickly, more fire gases is formed, and the fire becomes more unpredictable. If the fire rapidly becomes fully developed it can be more difficult to penetrate into the fire room. The impact of the heat increases both on the enclosing structures and on the fire fighters. There is also an increase in the production of fire gases, which can spread the fire. Fire ventilation of areas with fully developed fires has a limited effect. It can therefore be wise to vent adjacent rooms where the damage is not so serious.

When unburnt gases from an underventilated fire flow through leakages into a closed spaceconnected to the fire room, the gases there can mix very well with air to form a combustible gas mixture. If these gases are ignited, a fire gas explosion may occur.

Backdraft is the burning of heated gaseous products of combustion when oxygen is introduced into an environment that has a depleted supply of oxygen due to fire. This burning often occurs with explosive force.

Fire ventilation should be implemented as soon as possible during the fire and rescue operation. If the fire is fully developed in one or more rooms, it is very often better to focus on fire ventilation of the adjacent rooms where the fire has not yet spread.

Extreme caution is required in the case of ventilation-controlled fires in very large or inaccessible rooms. Above all it is necessary to coordinate with other measures being taken at the scene of accident, in particular the suppression measures. In all probability the fire will increase in intensity after implementing fire ventilation. If air is supplied to a ventilation-controlled fire the worst scenario can be a fire gas explosion, or a backdraft.