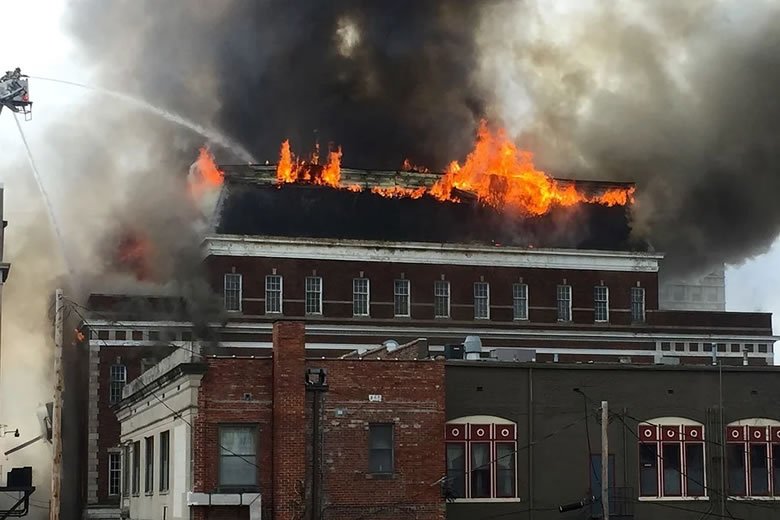 It is important to link fire ventilation with other parts of the fire and rescue operation, depending among other things on what the fire looks like,what the building/fire room looks like, and which resources are available.

A number of conceivable fire and rescue operations are described below, where fire ventilation can be an appropriate measure. The exemplified situations have been refined to demonstrate the issues, problems and possibilities applicable to fire ventilation. In real fi res it is seldom as simple as this.

Above all there is a time factor to be taken into consideration, which is difficult to describe in a text of this nature. The intention of the examples is only to create a picture of how several different, but conceivable situations may develop.

Small fire in relation to the size of the room

If the fire is small in relation to the size of the room the fire will seldom develop into a fully developed fire, even if the fire is fuel controlled all the time. The fire may, however, develop a large volume of fire gases that needs to be vented out.

This could be the case, for example, in a large industrial premise with a relatively contained fire, or if there is a high ceiling. The higher the ceiling, the greater the volume of air that will be mixed in with the products from the fire.

There will therefore be a large volume of fire gases, but it will be relatively cold and diluted. Because of the size of the room the fire will be fuel controlled for a long period, and may not become ventilation controlled at all.

The risks associated with fire ventilation are very small in this situation.

It is also conceivable that a similar situation will occur in the case of apartment fires. The interior ceiling and walls may be incombustible (e.g. plasterboard) and if the interior furnishings (furniture etc.) are placed in such way that a fire in an individual object does not spread to other objects, the fire can remain fuel controlled during the entire fire scenario. It may self extinguish when the fuel is used up.

The risks associated with fire ventilation in these situations are also very small.

Small fires can, however, develop quickly and powerfully during fire ventilation if they are located in double flooring, ceilings, under floor areas, or confined in other ways in what is otherwise a large room. This sets extensive tactical requirements, above all in the form of the build-up of resources. Even if the room is well ventilated there can be concealed areas that are poorly ventilated.

Since the fire gases has a relatively low temperature and very limited buoyancy force, an opening for an outlet should be made as high up as possible, preferably in the roof. Supply air should be taken from the lowest possible point, and mechanical ventilation should be carried out.

Negative pressure ventilation can as a result of practical problems be difficult to implement, especially if the room is very large.

To be taken into consideration in the case of a small fire in relation to the size of the room:

If the room is very large, a large air flow will be required to maintain sufficient positive pressure. Fans on the supply air side could also create large problems, since the stratification of the smoke can be interfered with so that it is spread throughout the room.

Long access routes make it more difficult to locate the source of the fire.

At high wind speeds (more than 5–8 m/s) the positioning of inlets and outlets should be selected so that they interact with the mechanical ventilation.