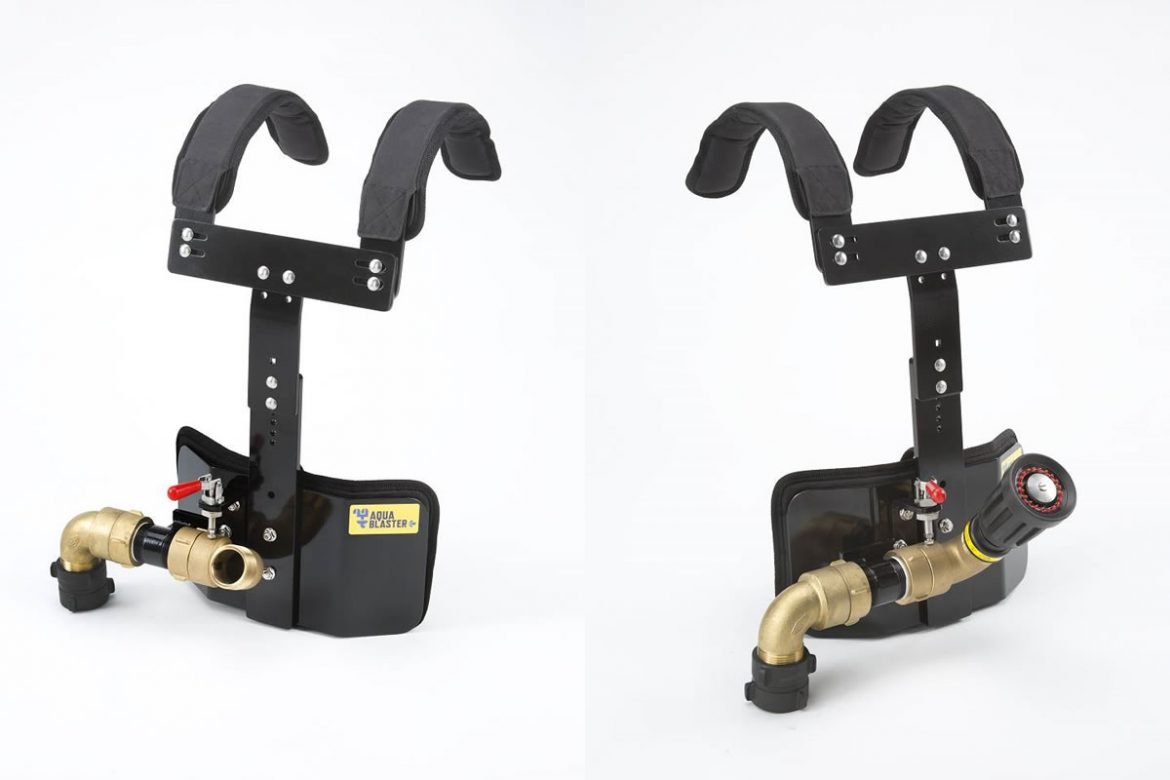 The Fire Hose Carrier aka Aqua Blaster is a harness frame fire hose and fire nozzle combination with the purpose of allowing a charged fire hose to be more user friendly while in operation. The constructed design and mechanical function of the Aqua Blaster allows its user to use his/her torso and lower body strength to have and maintain enhanced control of the fire hose when operating the fire nozzle while having the ability to advance and or maneuver the fire hose much easier whether being assisted or completely unassisted.

The harness frame of the Aqua Blaster is constructed and designed identical to a percussion marching drum carrier that’s used by drummers in marching bands. The plumbing or flow control aspect or component of the Aqua Blaster consist of two 90 degree elbow swivels that’s attached on opposite ends of a pipe or tubing that’s mounted on the lower belly plate of the harness frame. Both elbow swivels will have a 360 degree rotation capacity with one attaching a fire hose adapter to connect the fire hose at the side of its user and the other elbow swivel connecting the fire nozzle which will position the fire nozzle front and center at the torso area.

The fire hose elbow swivel on the flow control component allows the user to easily maneuver his/her body with the fire hose and also allows the fire nozzle to pivot up and or down when in use or not in use. A locking device for the nozzle elbow will be constructed on the Aqua Blaster to provide its user with the option to lock the charged or uncharged nozzle at the desired angle or position. This will also allow the nozzle to remain stationary in its locked position even if the user’s hand(s) are not on the nozzle for some reason.

For Example, the various aspects of firefighting, power washing, dust suppression and debris removal, or any other task that requires the manual use of fire hoses. Even if the Aqua Blaster is just used just a certain percentage of time in a career of using fire hoses (hypothetically 35%), it could possibly prolong those careers and could save millions of dollars in worker’s compensation claims that would be associated with those particular professions due to the chronic joint and back pains that was mentioned previously which can have you out from work or shorten those careers altogether.

The Aqua Blaster is a new and innovative concept that accommodates and compliments the existing fire hoses and nozzles that are being used worldwide in a variety of ways and within a variety of industries and professions.